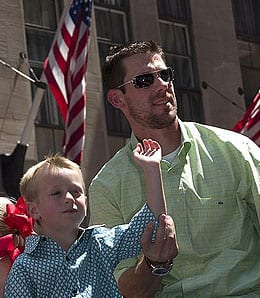 Adding Cliff Lee to anchor its young rotation is huge for Texas.

It sure looks like the Yankees are almost as unstoppable as they were in the playoffs last year. But with the Rays only 2.5 games back, the Pinstripers will have to keep playing hard and winning if they want to surpass them in the playoffs.

Biggest Drop: The Detroit Tigers dropped from 10th to 17th thanks to a seven-game losing skid that saw them lose plenty of ground on the White Sox.

1. (1) New York Yankees, 59-34: Even though the Yanks just won two out of three against the Rays who are right on their tail, with Andy Pettitte out with a groin injury, and A.J. Burnett out with a lacerated hand, there’s definite cause for concern.

2. (2) Tampa Bay Rays, 57-37: Despite losing the series to the Yankees, they are only 2.5 games back in the AL East. And with the second best record in the league, their chances to make playoffs are looking good unless they keep blowing leads against teams as bad as the freaking Orioles, that is.

3. (4) Texas Rangers, 55-40: The Rangers has a very tough second-half schedule, but after winning three of four against Boston and two of three against Detroit, it’s smooth sailing so far. With Cliff Lee having a very good outing in his second start for the Rangers, hopes of winning the division are definitely looking up.

5. (6) San Diego Padres, 55-38: The Padres are still going to need to get more consistent hitting from someone besides Adrian Gonzalez, but 26 runs in a three-game sweep of the lowly Diamondbacks is a great way to start.

6. (5) Boston Red Sox, 53-42: Losing their first two series and going 2-5 after the All-Star break was not how the Red Sox wanted to start the second half given the injury issues that have plagued them all year. Fortunately, John Lackey, who’s been red hot on the road, gets the start Thursday as Boston opens a four-game set in Seattle.

7. (13) St. Louis Cardinals, 54-41: The Cards are perfect through their first seven games of the second half, including a four-game sweep of the Dodgers, and the first three of a four-game series against the Phillies. And with Adam Wainwright taking the mound Thursday, St. Louis has an excellent chance to garner its first four-game sweep of Philly in 24 years. This team is proving to the rest of the league how much it wants to win and is becoming a serious threat towards the Reds, who held first place in the NL Central at the conclusion of the first half.

8. (9) Cincinnati Reds, 53-43:  It’s not that the Reds have been bad this half (4-2), but they’ll have to do better to try to wrestle the division lead back from the red-hot Cardinals. The fact that Edinson Volquez has looked so strong in his return from Tommy John surgery has been a huge boost for this team, however.

9. (7) Chicago White Sox, 52-42: If Bobby Jenks hadn’t imploded at the end of Sunday’s game, the White Sox could have split their series against the Twins and maintained their lead of the AL Central, which is now down to 2.5 games.

10. (15) San Francisco Giants, 52-43: You’ve got to love Tim Lincecum coming out to pitch a complete game shutout against the Mets in the first game of the second half. That’s 10 wins for the Giant ace, giving him a third straight double-digit win season.

11. (8) Colorado Rockies, 51-43: The Rockies are the major’s best offensive team at home, scoring about 5.75 runs per game, but are the third worst offensive team on the road, averaging only 3.73 runs per game. It all balances out to third place in the NL West. On Thursday, the Rox will try to salvage a split in Florida, a place they’ve failed to win a series in the last three years.

12. (17) Los Angeles Angels, 51-46: After taking three of four against Seattle, and splitting a two-game series wth the Yankees, the Angels must now tread carefully with a four-game series in Texas, a series against Boston, and another series against Texas at home to finish off July. Fortunately, the Angels have ace Jered Weaver set to open the series against Texas Thursday; unfortunately, the last six times he’s pitched in Texas, the Halos have suffered losses and his ERA over those starts is well north of 6.00.

13. (16) Minnesota Twins, 50-45: Fortunately, the Twins averted a sweep by taking the final game of their four-game series against Cleveland, and now they catch a break with the schedule with series against Baltimore, Kansas City, and Seattle. Look for the Minny bats to be swinging and producing a lot throughout the rest of this month. To kick off the B-More series Thursday, the Twinkies send the suddenly durable and workhorse-like Carl Pavano to the mound. He’s tossed 11 straight outings of at least 6 1/3 IP, putting him on pace for a career-best 229 IP.

14. (14) Philadelphia Phillies, 48-46: Given their 1-6 mark so far in the second half, it doesn’t look like the Phillies have what it takes to get ahead in their division. They have given up an average of 6.1 runs per game over the first seven games of the second half and now find themselves seven games behind Atlanta. The Phils are struggling horribly now, having been outscored 20-6 in the first three games of their four-game set against St. Louis.

15. (11) Los Angeles Dodgers, 50-45: The Dodgers have lost their first six games since the break; fortunately, they are only six games back in the tight four-team race in the NL West. However, with their best pitcher, Clayton Kershaw, suspended five games after intentionally throwing at Giant centrefielder Aaron Rowand Wednesday night, it’s pretty clear their frustration is mounting.

16. (12) New York Mets, 49-46: After losing three of four in San Francisco, the Mets went from bad to pathetic, getting swept in Arizona. Now, they continue their 11-game road trip in LA against the Dodgers in a battle of struggling teams. Something’s gotta give here, folks.

17. (10) Detroit Tigers, 49-44: The Tigers finally earned their first win of the second half Wednesday night, and now they look to fight their way back to first place in the AL Central ahead of both the White Sox and Twins. Better yet, they’ve got ace Justin Verlander, seeking a fourth straight win, to start a series at home against the Jays Thursday.

18. (18) Toronto Blue Jays, 48-47: Jose Bautista’s MLB-leading 26 homers is impressive, but it doesn’t look like it’s going to be enough for the Jays to compete in the best division in baseball with the Yankees, Rays, and Red Sox all at least five games ahead of Toronto now.

19. (20) Oakland Athletics, 48-47: The A’s have had a very good start to the half, taking five of six, two of those wins courtesy of Gio Gonzalez, the second of which coming Wednesday night to give Oakland a series win over the Red Sox.

20. (19) Florida Marlins, 46-48: The Marlins’ All-Star shortstop, Hanley Ramirez, has one homer (his only extra-base hit) and just three RBI in 16 games this month. He’s getting a day off Thursday, so hopefully that will help him shake off the cobwebs. Can you say Home Run Derby hangover?

21. (22) Chicago Cubs, 43-53: The Cubs started the post break period strong, taking three of four against the Phillies, but then turned around at dropped a series against Houston at Wrigley. As a result, there’s no way we can move the Cubs into the top 20. Worse yet, after a 12-inning game Wednesday, the bullpen is taxed. The good news is Chicago has an off day Thursday; the bad news is its next series is against scorching St. Louis.

22. (21) Milwaukee Brewers, 43-53: With Yovani Gallardo scheduled to come off the DL to start on Thursday in the series finale against Pittsburgh, the Brewers have something to be happy about after losing Tuesday and Wednesday to the Pirates, giving up 26 runs in those two games.

24. (23) Kansas City Royals, 41-53: The Royals are going to need help from a higher source to produce some quality outings out of their pitchers in a four-game series in New York versus the Yankees starting Thursday. Southpaw Bruce Chen takes the bump for the opener, and if you’re looking for a silver lining, at least Alex Rodriguez is batting a career-worst .214 against lefties. Unfortunately, the Yankees as a team are even more potent against lefties than righties.

25. (28) Cleveland Indians, 40-55: A 6-1 mark since the break, including a sweep of Detroit and two of three against Minnesota is great by anyone’s standards. I bet the Indians wished they could have played this well all season. Their surprising six-game winning streak was snapped Wednesday, however. Will it all be downhill from here?

27. (26) Seattle Mariners, 37-58: With a very tough second-half schedule, the Mariners are already struggling at 2-5. They are probably already looking towards next season; at the very least, they’re definitely not looking forward to facing Lackey Thursday, considering he’s posted a 1.78 ERA over his last five starts in Seattle, all wins.

28. (27) Arizona Diamondbacks, 37-58: The D-Backs started the second half enduring some tough losses while being swept and outscored by the Padres 26-10, but they bounced back and swept the Mets thanks to a Chris Snyder pinch-hit RBI single on Wednesday.

29. (30) Pittsburgh Pirates, 34-60: The 36 combined hits the Pirates had over Saturday and Sunday is the most they have had in any two consecutive games since they hit 36 on September 16-17, 1975. By the way, if Pedro Alvarez is unowned in your league, grab him quick. The prodigy has back-to-back multi-dinger games, producing eight RBI.

30. (29) Baltimore Orioles, 30-64: Okay, we definitely a mistake moving the Orioles out of the cellar last week. Won’t make that mistake again. In fact, I doubt they’ll see anything but 30th place from here on, especially with Kevin Millwood taking a serious beat-down every five days.

By Trevor Blake
This entry was posted on Thursday, July 22nd, 2010 at 11:36 am and is filed under BASEBALL, MLB Power Rankings, Trevor Blake. You can follow any responses to this entry through the RSS 2.0 feed. You can leave a response, or trackback from your own site.