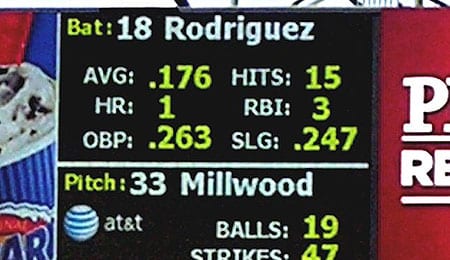 Sean Rodriguez’s numbers were pretty lame back in May. Is he headed back there after a big June?

Should I be concerned about Sean Rodriguez? Or is everyone just dropping him due to his cold streak?

S-Rod went 3-for-23 heading into the break and that is the reason for the number of teams that have been dropping him. His horrendous strike zone judgment (64 strikeouts against only six walks) is also a contributing factor. As long as Manager Joe Maddon keeps wheeling Rodriguez out there, the potential power is intriguing, but you have listed several options that I personally like better.

The two names that definitely stand out on your list are Beckham and Lopez. Both have struggled in the first half but are historically solid options at second base. Beckham went 2-for-3 with his fourth homer Thursday and looks to be heating up. Lopez has struggled, but don’t forget that just last year he managed 25 long balls and 96 RBI. He is also rumoured to be on the move with the Phillies being the suitors. A move to that park and the supporting offense could be huge for Lopez.

I also like Hudson, especially from a runs scored perspective. Batting in the two hole for the Twins he will cross the plate plenty of times, and the supporting power/speed/BA, although not spectacular, certainly isn’t a negative. He may be a rather unsexy pick, but at the same time he does represent value.

My recommendation would be to cut Rodriguez and grab Beckham but keep a real close watch on Lopez. If Lopez gets traded or starts demonstrating the power numbers he posted in 2009, grab him immediately. If all else fails Hudson is there for the taking.

I’m trying to decide on switching some pitchers around but, so far, everyone seems balanced. Who will have a better second half? Current roster: Jon Garland, Derek Lowe, James Shields, and Jeff Niemann. Possible pickups: Gavin Floyd, Wandy Rodriguez, Daisuke Matsuzaka and Rick Porcello. Are any of my current pitchers worth dumping to pick up any of the second half possibilities?

There are two pitchers on your current roster that I wouldn’t even think about cutting in Shields and Niemann. Shields has been struggling as of late, but that 109/26 K/BB ratio does bring its share of promise into the second half. Niemann is a horse. In 117 IP he has allowed only 94 hits and has struck out 84 in posting a 2.77 ERA and 1.09 WHIP — outstanding numbers so far, and I strongly believe he will continue to post solid numbers down the stretch.

Garland has enjoyed a great first half, posting eight wins and a 3.56 ERA. However, in eight full seasons he has posted exactly one season with an ERA under 4.00 and that was back in 2005. I think that the odds are pretty good that we see some regression in the second half. Lowe is what he is. He got off to a great start from a wins perspective, but has only won once since June 2 and is now coming off three consecutive losses. Clearly, this is not a good sign for a 37-year-old heading into summer. Both Garland and Lowe would be my two choices to cut at this stage.

The question is for whom? We have a choice of Matsuzaka, Rodriguez and Floyd. All three of these pitchers carry a fair share of risk, but I believe they all provide better opportunities for success in the second half than your incumbents. Dice-K has the injury history to deal with but in his last start, I saw him hitting 94 on the gun and he wasn’t playing his usual game of trying to paint the corners. He was relying on his fastball and it served him well. When healthy, Matsuzaka can be a dominant pitcher.

Wandy is coming off a loss to the Cards, but other than the three-run shot he gave up to Matt Holliday (who has been on fire), he’s been the Wandy of old in his past four starts. The strikeout rates are back on the rise and the walks are significantly lower, coming more in line with his 2008-09 seasons. I believe Rodriguez has turned the corner and will continue to be a solid producer this season. There’s also the possibility of him being traded to a better team, which whould provide a boost to his win total.

Finally, the pitcher that has been giving owners fits, Floyd. In seven starts since early June he has allowed a grand total of seven earned runs. He has struck out 41 in 50 1/3 IP over that span while reeling off three consecutive wins. He’s a must own in all formats at this time.

In conclusion, I would drop both Garland and Lowe and grab Rodriguez and Floyd. When in doubt I always lean towards pitchers with strong strikeout potential and this move gives you solid opportunities in that area. I’d also keep an eye on Dice-K. Another start or two like his last one against the Jays and you might want to make a move in that direction. The memory of that 18-3 season still lingers for me.

By Tim McLeod
This entry was posted on Friday, July 16th, 2010 at 2:32 pm and is filed under BASEBALL, Dear RotoRob, Tim McLeod. You can follow any responses to this entry through the RSS 2.0 feed. You can skip to the end and leave a response. Pinging is currently not allowed.