Random Notes for a Saturday Evening 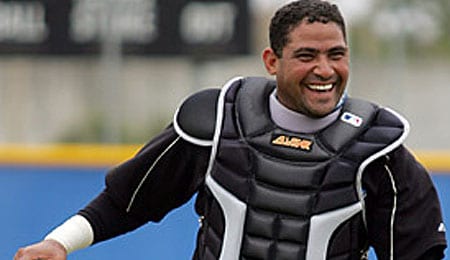 Bengie Molina had plenty of reason to smile on Friday after hitting for the cycle.

Oh baby, did Carlos Marmol ever suffer a serious meltdown Saturday. How about five walks and four runs allowed? Yikes, dude. In fairness, Marmol’s control – while still quite spotty – has been better this season, and his Ks have been just sick. So we’ll cut him a bit of slack, especially since he had been so sharp in July before this outing.

So Bengie Molina – he of the six career triples before Friday – hits for the cycle, and upon completing this rarity with the three-bagger, he hurts his hammy and has to come out of the game. Fortunately, he didn’t hurt himself badly enough to miss any time, but I’m still marvelling at his big game. I mean, Molina had barely done anything since arriving in Texas a couple of weeks ago, but did he ever get off the Schneid with this effort. By the way, if Molina has been dropped in your mixed league, you might want to consider him. He’s going to get ribbie opportunities in that potent Ranger lineup.

Miguel Cabrera went hitless Saturday, ending his 20-game hitting streak. What a stiff. Sit his ass down if you own him.

Apparently, Jeff Bagwell likes a challenge. Why else would he leave his cushy special assistant to the GM gig and accept the hitting coach job for Houston, the worst offensive team in baseball?

Speaking of the Astros, how sick is Roy Oswalt looking in his last couple of starts? Try 16 shutout frames, and he gets the Pirates Sunday. Houston must be licking its chops as Oswalt’s trade value soars. And you’ve got to know he’s on his way out very soon.

By RotoRob
This entry was posted on Saturday, July 17th, 2010 at 7:27 pm and is filed under BASEBALL, RotoRob. You can follow any responses to this entry through the RSS 2.0 feed. You can leave a response, or trackback from your own site.