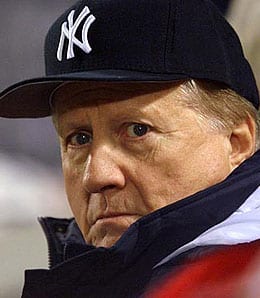 George Steinbrenner is gone, but his legacy is intact with the Yankees rolling along.

On Tuesday night, the NL finally won the All-Star game for the first time since 1996, thanks to Brian McCann’s timely hit. It’s been a very interesting first half of the 2010 baseball season, with plenty of star rookies debuts to surprising All-Stars; let’s see what happens in the second half. Who will make the playoffs this year, and who will win the World Series?

Biggest Jump: The Chicago White Sox have jumped nine spots from 16 to 7 after their fiery ending to the first half of the season.

Biggest Drop: The Minnesota Twins have dropped five spots from 11 to 16 after some serious losing.

1. (1) New York Yankees, 56-32: It’s a bittersweet break for the Yanks. They lost George Steinbrenner this week, but are the team in the majors at the halfway mark in the season behind all their All-Stars. At least they didn’t lande Cliff Lee on their team; it would have made the Yanks unstoppable.

2. (2) Tampa Bay Rays, 54-34: Who’d have thought that David Price would have the both most wins and best ERA in the AL at the All-Star break and even start for the American League in the All-Star Game?

3. (5) Atlanta Braves, 52-36: After winning series against the Phillies and Mets to end the first half, this team moves to the top of the NL. With Jason Heyward coming back to the lineup within the next week, look for the Braves to keep winning.

4. (3) Texas Rangers, 50-38: Despite going 3-8 in July and losing their last four games to the Baltimore Orioles, the Rangers have made themselves a much better team thanks to their recent acquisition of Cliff Lee. This break comes at a perfect time for Texas, giving the team some well needed rest to come back and win the AL West.

5. (4) Boston Red Sox, 51-37: David Ortiz just won the Home Run Derby, so maybe he’ll keep that dinger mojo into the second half and slam some balls over the Green Monster.

6. (6) San Diego Padres, 51-37: Even though they are leading the close NL West race, the Padres’ great pitching may not be enough to get them to the playoffs with only Adrian Gonzalez hitting (although, in fairness, Aaron Cunningham looks like a great addition to the team).

7. (16) Chicago White Sox, 49-38: Wow, this team has been on fire! They are 9-1 this month, and 25-5 over their last 30 games. The Pale Hose better hope they can continue their almost perfect play after the break. Their only problem is that they just put Jake Peavy on the DL, so he won’t be pitching for a little while, as in until 2011.

8. (15) Colorado Rockies, 49-39: The Rox have gone 8-2 this month, with Ubaldo Jimenez leading their pitching, and All-Star snub Carlos Gonzalez leading the offense. Gonzalez paces the team in almost every batting category, including batting average (.314), homers (17) and RBI (60). Colorado has a stiff test to open the second half, with a series in Cincinnati against the NL Central leading Reds.

9. (7) Cincinnati Reds, 49-41: Still holding a slight edge on the Cardinals, I see the Reds losing their NL Central lead in the second half. After getting swept in a four-game set against the Phils, the break comes at a good time for this team to get some rest and get back to their winning ways.

10. (9) Detroit Tigers, 48-38: Behind Miguel Cabrera’s bat and Justin Verlander’s arm, this team is just barely out of first place in the AL Central. Look for Cabrera to finish the rest of the season just as strong.

11. (12) Los Angeles Dodgers, 49-39: Going into the break tied for second in the NL West is great for this team. Clayton Kershaw is pitching brilliantly and Jonathan Broxton is at 19 saves. However, the Dodgers have a tough schedule to finish July with series against St. Louis, San Francisco, the Mets and San Diego.

12. (8) New York Mets, 48-40: This is another team that needed the All-Star break for a little R&R. After losing series to Atlanta and Cincinnati, and only splitting with Washington, a little down time is probably much needed.

13. (10) St. Louis Cardinals, 47-41: After their absolutely awful meltdown in Colorado, they managed to win their last series against Houston thanks to Matt Holliday’s 8-for-25 showing that included five homers and 12 RBI.

14. (14) Philadelphia Phillies, 47-40: The Phils ended the opening half on a high note thanks to a great four-game sweep of the Reds. Three of those wins were in extra innings, and those strong finishes helped redeem the Phils after they dropped three out of four to one the worst team in the NL, the Pittsburgh Pirates.

15. (17) San Francisco Giants, 47-41: A 7-3 run to end the first half is a good way to go. With Tim Lincecum starting the first game back against the Mets, he has a chance to push his team to a win as it tries stay in the race for first place.

16. (11) Minnesota Twins, 46-42: Losing five of their last six series is a big problem, as the Twins are now 3.5 games back in the NL Central. They need to figure something out if they want to get past the White Sox and Tigers.

17. (13) Los Angeles Angels, 47-44: After a 1-6 road trip found them out of first place at the All-Star break for the first time in five years, the only good thing the Angels had this break was that they got to play host to the Home Run Derby and All-Star Game.

18. (19) Toronto Blue Jays, 44-45: Jose Bautista leads the league with 24 homers, which is eight more than he has hit in any of his previous seasons. The bad news is everything else seems to be breaking down for the Jays — even their retractable roof!

19. (20) Florida Marlins, 42-46: Since Josh Johnson and Dan Uggla can’t carry the team by themselves, maybe Hanley Ramirez’s appearance in the Derby’s finals will help drive him to a big second half and power this team to more wins.

20. (18) Oakland Athletics, 43-46: Even though they’re just 5-5 in July, that’s the best mark in the division so far this month. But if Trevor Cahill can keep up his great work and Brett Anderson returns strong, this team has a chance to stay in the race.

21. (23) Milwaukee Brewers, 40-49: Sure, they swept the Pirates, but that’s not too impressive a feat. More telling was the fact that the Brewers had just been swept four straight by the Giants.

22. (22) Chicago Cubs, 39-50: It’s too bad the Cubs only have 18 games left against NL West teams, as they seem to be only teams the Cubbies can beat (11-5 so far this year). If they played the NL West for the rest of the season, Chicago might win the NL Central, but that’s not going to happen. Blame the goat.

23. (24) Kansas City Royals, 39-49: After winning a series against the Angels and sweeping the Mariners, the Royals were rolled around by the White Sox and were outscored 28-8 in a three-game sweep.

26. (25) Seattle Mariners, 35-53: The Mariners traded away one of the best pitchers in the AL in Cliff Lee — the same dude they tried so hard to get in the offseason. And this came after they added payroll by acquiring Russell Branyan. Who knows what the Mariners are thinking these days.

27. (28) Arizona Diamondbacks, 34-55: New manager Kirk Gibson is 3-7 since taking over for A.J. Hinch. Worse yet, all 10 of those games were at home and now the Snakes have to head out on the road to San Diego to face the division leading Padres.

28. (27) Cleveland Indians, 34-54: Maybe they will win more games now that LeBron James is out of Cleveland and all the focus is away from basketball. Hey, just trying to find a silver lining here, folks.

29. (30) Baltimore Orioles, 29-59: I’m taking a big leap moving the Orioles up from the basement, but they just swept the Rangers in a four-game series to pull within a game of the Pirates in the overall standing. And I see the O’s having a better record in the future than Pittsburgh.

30. (29) Pittsburgh Pirates, 30-58: They have lost their last six games and end the first half as baseball’s lowest scoring team with only 284 runs (40 less than the Orioles, believe it or not).

By Trevor Blake
Tags: MLB
This entry was posted on Thursday, July 15th, 2010 at 12:28 pm and is filed under BASEBALL, MLB Power Rankings, Trevor Blake. You can follow any responses to this entry through the RSS 2.0 feed. Both comments and pings are currently closed.