MLB Today: How Long do the Twins Stick with Nick Punto? 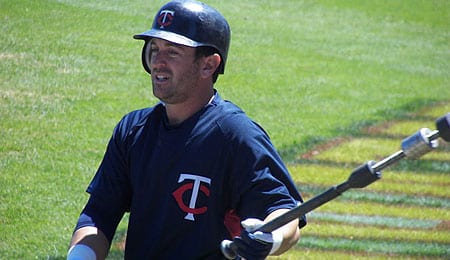 Should the Twins consider upgrading from the offensively inept Nick Punto?

Oh man, how bad did the Minnesota Twins need that win over Detroit on Sunday?

They had lost four straight games and were in danger of dropping five games back of the second-place Tigers heading into the second half.

Things are bad enough already. Keep in mind that just 10 days ago Minnesota was in first place in the AL Central. Now, it’s in third place, 3.5 games back of the super hot White Sox, who are a half game up on Detroit. Hell, even Kansas City, playing better of late, has pulled within seven games of the Twins, as inconceivable as it seems that the Royals could overtake Minny.

At any rate, the Twinkies sure needed to end the first half on a positive note, especially with All-Stars Justin Morneau (concussion) and Joe Mauer (shoulder) both missing in action on Sunday.

Things were going so swimmingly for Minnesota Sunday that even Nick Punto got a hit. Stop the freaking presses! It was his first base hit since the Twins led the division a week and a half ago, putting the skids on an 0-for-15 drought.

Now, no one has ever confused Punto with being a legitimate Fantasy star, but he’s had a couple of decent seasons at which point he was a useful bench option in AL-only or deeper mixed leagues.

Certainly, he’s more valuable in the real world based on his ability to play multiple positions, and the Twins sure were glad that his April injury wasn’t season-ending as some suspected at the time. Punto has already qualified at third base and shortstop this season, and remains second base eligible based on last season, so if he’s playing even moderately well, he’s a decent backup option because he’ll provide insurance at three different positions while only taking up one roster spot.

And Punto certainly was proving his worth in June, batting .301, although he only swiped one base and has managed just five on the year, disappointing because we can usually count on him being in the teens by season’s end.

Even if the Twins have struggled with runners in scoring position, they still have one of the better hitting teams in the majors. However, Nick Punto, with his whopping 625 OPS (which, shockingly, is a slight improvement over last season), is definitely not a part of that.

Yet Punto continues to start against righties in favour of youngster Danny Valencia. Why? The switch-hitting Punto is only hitting .235 against righties (not that he’s killing lefties with a .254 mark), while the right-handed hitting Valencia, albeit in a very small sample size, is batting .290 against righties and .333 vs. southpaws.

I wouldn’t be surprised to see Valencia getting more and more action at the hot corner as the season progresses. I mean, it’s not as if the demoted Brendan Harris is going to be back anytime soon. (In fact, he’s been even worse at Triple-A, with a 375 OPS through 51 at-bats – what the hell is wrong with him?)

Sure, the veteran Punto has provided the Twins with more or less what they expected of him. Valencia, just 25, may still need more time before Minnesota believes it can hand him the job outright.

But there’s still another option for the Twins at the hot corner. How about picking up the phone and giving free agent Joe Crede a call? He’d make a fine acquisition, shouldn’t cost too much and could provide a real spark to the Twin lineup – perhaps enough for them to turn things around and get back into the division lead.

By RotoRob
This entry was posted on Monday, July 12th, 2010 at 12:08 pm and is filed under BASEBALL, MLB Today, RotoRob. You can follow any responses to this entry through the RSS 2.0 feed. You can skip to the end and leave a response. Pinging is currently not allowed.