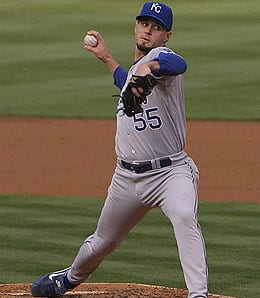 Gil Meche is on the comeback trail for the Royals.

When we last checked in on the Kansas City Royals a couple of weeks ago, we wondered whether they could still sink to the bottom of the AL Central. Well, to be fair, notwithstanding losing their final three games before the break against the seemingly unstoppable force that is the White Sox, they had actually been playing decently of late. Thanks to some recent woes by Minnesota, KC finds itself just seven games back of the third-place Twins and a somewhat comfortable five games ahead of fifth place Cleveland as we pause between the halves.

One of the biggest issues KC has had this season is that its rotation has been awful. If not for the Orioles, the Royals would have the worst starting staff in the American League. Zack Greinke hasn’t been anywhere near as good this year as he was during his Cy Young performance in 2009, although he’s looked much better recently. Bruce Chen has been a pleasant surprise as an injury fill in, but how long can he keep this up? Luke Hochevar was showing improvement this year before going down with an elbow woe last month, an injury that should keep him sidelined for at least another couple of weeks. Any progress Brian Bannister made last season has gone by the wayside this year as his usually modest K totals are even more modest. The best thing we can say about Kyle Davies is that he’s been healthy, and that’s a rarity for this staff. Anthony Lerew, who was moved into the rotation when Hochevar went down, actually had a couple fine outings, but more recently he’s proving again why he’s a fringe major leaguer who has never been able to stick in anyone’s rotation.

And then there’s Gil Meche, who has been out since May 25 with a shoulder problem. It was pretty clear something was awry with him this season right from the get-go as he was battered like a stepchild all April. Meche actually looked a lot better in May until landing on the DL at the end of the month. Now, there’s word that he may be getting closer to a return after tossing three simulated innings on Sunday. The curveball remains his Achilles ’ heel as last Friday he tried throwing some for the first time since he was sidelined and he experienced elbow soreness afterwards.

Meche will take a few days off now before playing catch Thursday and then throwing four simulated innings on Friday, but he said he won’t try tossing curveballs again until his arm is feeling stronger.

If all goes well, expect the veteran to head out on a rehab assignment soon and rejoin the Royals rotation before the end of the month.

Meche still has another year left on that five-year, $55-million deal he signed with KC, and I’m sure the Royals would love to deal him before the deadline, however, he has a limited no-trade clause for 2010 and will need to prove he’s healthy before anyone takes on that contract.

From a Fantasy perspective, Meche will generally be a wait and see option. We weren’t overly bullish on his prospects this year, barely ranking him as a top 100 pitcher at the beginning of the season, but that seems quite generous now considering how poorly he pitched before getting hurt.

Still, Meche put up some solid numbers in his first two seasons in KC, so if he truly is healthy in the second half, he could be a sleeper candidate. If I’m in a deep AL-only league, I might pluck him off the wire now if I had room to stash him.

By RotoRob
This entry was posted on Tuesday, July 13th, 2010 at 3:15 pm and is filed under BASEBALL, RotoRob. You can follow any responses to this entry through the RSS 2.0 feed. You can leave a response, or trackback from your own site.