The Wire Troll: Break it Down 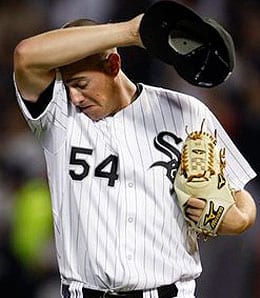 Here’s hoping that Daniel Hudson’s performance is less stinky than his B.O.

It’s All-Star break time. Enjoy the festivities, but at the same time take this opportunity to do a thorough analysis of your Fantasy teams. The second half is just around the corner and plotting a solid strategy for the final portion of the season should be first and foremost on our minds. Remember folks, this great game is very quickly turning from a marathon into a sprint and making solid plans is imperative when attempting to achieve that goal of victory, only a scant ten weeks down the road.

Without further ado, let’s take a look at some of the waiver wire options for this week.

Daniel Hudson, SP, Chicago White Sox: A season-ending injury to Jake Peavy has forced the White Sox to reach into their farm system for a replacement, so Hudson will make his 2010 debut Sunday against the Royals. In 93 1/3 IP at Triple-A Charlotte, he has posted 11 wins with a 3.47 ERA and 1.20 WHIP, and allowed only 81 hits and 31 walks while fanning an incredible 108. The top prospect will get run support with the White Sox offense firing on all cylinders these days, making him a must own in AL-only leagues and a pitcher that should be on the radar in mixed formats.

Michael Brantley, OF, Cleveland Indians: The 23-year-old got the call to replace the injured Shin-Soo Choo and was immediately inserted into the lead-off role. Brantley is struggling right now, but the playing time opportunities will be there and his track record at the minor league levels is such that the Indians will endure his trials and tribulations. Brantley’s excellent strike zone judgment, as evident by a 27/28 K/BB ratio at Triple-A Columbus, bodes well for his success in the bigs and makes him a solid option in both AL-only and deeper formats.

Brad Eldred, 1B, Colorado Rockies: The journeyman turns 30 Monday and is getting his first opportunity to play in the Show since way back in 2007 when he was a member of the Pittsburgh organization. Eldred got the call to replace the struggling Todd Helton, who hit the DL with back and hamstring issues. At Triple-A Colorado, Eldred belted 22 homers with 67 RBI in 266 at-bats and on Saturday he swatted his first long ball for the Rockies against San Diego’s Wade LeBlanc. Eldred should get the majority of at-bats against southpaws, so get him rostered in NL-only leagues immediately to take advantage of that huge power potential until incumbent Helton returns.

Wandy Rodriguez, SP, Houston Astros: After a horrendous start to the season, Rodriguez has bounced back and in his last start against the Pirates struck out ten. RotoRob identified a couple of weeks ago that now may be the time to jump on Rodriguez’s bandwagon, and it looks like a good call as he as he now turned the corner with this, his third consecutive quality start. We’re talking about a pitcher that last year won 14 games and struck out 193 over 205 2/3 IP while compiling a 3.02 ERA. Dropped by many, it’s worth a look to see if Rodriguez is available on your league waiver wire as he has the potential to be a strong asset down the stretch — especially from a strikeout perspective.

Dexter Fowler, OF, Colorado Rockies: Fowler was summoned back to the Mile High City on June 29 and was immediately inserted in the lead-off slot for the Rox. He will strike out frequently, but his power-speed combo makes him a must add in NL-only leagues and in deeper mixed formats. The 24-year-old did manage 27 thefts in 2009, so if you need a boost in this department, he’s a great option heading into the second half.

Chris Davis, 1B, Texas Rangers: Yes, he will strike out a ton, but with Justin Smoak being dealt to the M’s, Davis is going to get the playing time opportunities and his power potential is simply too great to be ignored. At Triple-A Oklahoma City, Davis belted ten homers, drove in 56, and put up an outstanding .354 BA in 263 at-bats. He also whiffed 64 times. Still, Davis has the job and should be a decent option down the stretch from a power perspective.

J.P. Arencibia, C, Toronto Blue Jays: Here’s an option for those of you that are playing in deeper formats. At the hitter’s paradise known as Las Vegas, 24-year-old Arencibia has mashed 23 homers, driven in 61, and is batting a robust .315, showing a huge improvement over the .236 BA he posted in 2009. This kid can flat out hit as he proved with 27 homers in 2008, 21 homers in 2009, and his huge breakout this season. Now that they’ve clearly fallen out of the race, maybe the Jays should get this kid up and see what he can do playing on the big league squad?

Other players we’re recommending this week:

Seth Smith, OF, Colorado Rockies: Smith is quietly plugging along with 12 homers and 38 RBI in 201 at-bats.

Will Venable, OF, San Diego Padres: Venable is heading this week on a rehab assignment and is tentatively scheduled to return to the Padres Saturday. His eight homers and 14 thefts in 214 at-bats is intriguing.

Jonny Gomes, OF, Cincinnati Reds: Gomes is tied for sixth in the NL with 60 RBI and owned in only 48 per cent of CBS leagues. Why so few?

Jayson Nix, 2B, Cleveland Indians: He’s on a tear with six homers in his last eight games. Ride the streak.

By Tim McLeod
This entry was posted on Sunday, July 11th, 2010 at 1:29 pm and is filed under BASEBALL, The Wire Troll, Tim McLeod. You can follow any responses to this entry through the RSS 2.0 feed. You can leave a response, or trackback from your own site.