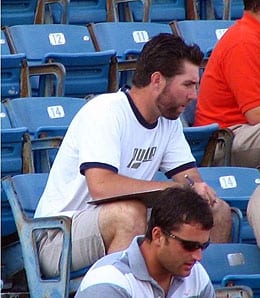 R.A. Dickey has been a bearded wonder for the Mets.

Today is that special day when we celebrate Father’s Day, so to all the dads in the land, here’s wishing you a great day. Hopefully, you get the opportunity to sit back and relax and enjoy some of the great baseball on the schedule today. Enjoy your presents and this special bonus of some waiver wire gems to keep you in the festive spirit.

Without further ado, let’s take a look at this week’s waiver wire recommendations.

R.A. Dickey, SP, New York Mets: Way back at the beginning of May, RotoRob speculated that Dickey might not be done yet, and lo and behold, the 35-year-old knuckleballer has been absolutely on fire as of late. He has now run off a string of five consecutive wins and in his past two starts has struck out 15. In his next three starts, Dickey faces Detroit, Florida, and Washington which should provide a decent opportunity to extend his current streak. Get him rostered in all formats to take advantage of his current hot streak but do remember when knuckleball pitchers are on a roll they are virtually unhittable, but when they are not we call it batting practice.

Clint Barmes, 2B/SS, Colorado Rockies: With Troy Tulowitzki sidelined for the next two months with a fractured wrist, Barmes takes over shortstop for the Rockies. He’s struggled this season, with only four homers and a dreadful .226 BA, but last season he hit 23 big flies, drove in 76 and managed 12 stolen bases. Unless the Rox look outside the organization for help – a distinct possibility – Barmes is their man and he should be rostered in NL-only and deeper formats.

Jonathan Herrera, 2B, Colorado Rockies: The 25-year-old is the prototypical all speed/no power middle infielder, but has demonstrated solid strike zone judgment in the minors. In an interesting move, the Rockies moved the Herrera into the lead-off slot Saturday and he responded in fine fashion, going 4-for-5 with an RBI and run scored. Until Colorado sorts out its middle infield, he’s got the job, making him worthy of adding in NL-only formats.

Pedro Alvarez, 3B, Pittsburgh Pirates: The last in a long line of great young prospects coming out of the Pirate system (besides Tony Sanchez, that is) was promoted last week. At Triple-A Indianapolis, the 23-year-old hit 13 homers and drove in 53 with a .277 BA. The Pirates didn’t call him up to sit on the bench, so with playing time comes opportunity and we know where that can lead, especially with a young player with Alvarez’s potential upside. Spending some of that FAAB on him this weekend may pay solid dividends.

Arizona Diamondbacks bullpen: Chad Qualls and Juan Gutierrez are both sporting ERAs north of eight so on Tuesday Diamondback manager A.J. Hinch named Aaron Heilman as his closer. In two appearances since the promotion, Heilman he has allowed three earned runs, five hits and one walk in 2 1/3 IP. It didn’t take him very long to revert to what is considered the norm in the Arizona bullpen. The best option in the desert could be Sam Demel, recently acquired from Oakland in the Conor Jackson deal. In 28 2/3 IP at Triple-A Sacramento, the 24-year-old Demel managed six saves, 28 strikeouts and a great 1.26 ERA. I’m betting that he works his way into the mix for saves in Arizona sooner rather than later.

Dayan Viciedo, 3B, Chicago White Sox: This one has been a while coming, but the White Sox are finally going to take a look at the 21-year-old Viciedo. In 238 at-bats at Triple-A Charlotte, he hit 14 homers, drove in 34, and sported a .290 BA. A low walk total (just eight) against 52 strikeouts indicates his strike zone judgment might need some work, but he’s clearly playing in an advanced league for his relative youth. Let’s just hope that manager Ozzie Guillen figures out that 43-year-old Omar Vizquel is not the answer at the hot corner and gives the kid an opportunity to get some action. Viciedo should be rostered in AL-only formats and on the radar in mixed formats depending on how much PT he garners.

Jesse Litsch, SP, Toronto Blue Jays: In his first start last Sunday since returning from Tommy John surgery the 25-year-old got lit up like a Christmas tree. However, on Saturday against the Giants, Litsch pitched seven strong innings, allowing only three hits and walking none in a no-decision. Keep Litsch on the radar, especially in AL-only leagues, as once his strength fully returns so might those great win and solid ERA numbers that he compiled in his last full season in 2008.

Alcides Escobar, SS, Milwaukee Brewers: After a terrible start, 23-year-old Escobar has been picking up the pace lately. In his past ten games, he’s hitting .281 with three stolen bases. Not exactly HOF numbers, but considering he’s playing at a position that doesn’t exactly feature an overabundance of depth and talent, Escobar has become a player worth acquiring. He should be rostered in NL-only leagues and on the radar in mixed formats.

Cole Gillespie, OF, Arizona Diamondbacks: With the Snakes trading Jackson to the Athletics, playing time has temporarily opened up for Gerardo Parra, but how long will it be before we see Gillespie getting the call? Get the jump on your league and make the move now. In 417 at-bats last season, Gillespie smacked 13 homers with 63 RBI, stole 16 stolen bases and hit .273. He has demonstrated solid strike zone judgment in the minors and it won’t be long before we see him plying his five-category talent in the Arizona outfield.

Evan Meek, RP, Pittsburgh Pirates: With the youth movement clearly underway in Steel City, when will Meek ascend to the closer role? I think if incumbent Octavio Dotel doesn’t get it together very quickly the answer would be sooner rather than later. Dotel has allowed an earned run in four of his past six appearances and with the Pirates going young, long will it be before we see Dotel shipped out to a contender or simply replaced? Meek is clearly ready. He’s allowed a total of three earned runs — one in April, two in May and none thus far in June. He’s sporting a 0.68 ERA and 0.83 WHIP in 40 IP – truly sick numbers — and is as safe a speculation pick as you can find. Make the move to acquire him now and beat the inevitable rush.

By Tim McLeod
This entry was posted on Sunday, June 20th, 2010 at 3:51 pm and is filed under BASEBALL, The Wire Troll, Tim McLeod. You can follow any responses to this entry through the RSS 2.0 feed. You can skip to the end and leave a response. Pinging is currently not allowed.