MLB Today: Did Cruz Get Torpedoed? 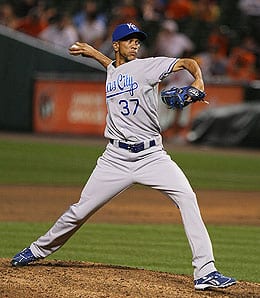 Why was Juan Cruz released just a few weeks before undergoing surgery?

Anyone else wonder why there wasn’t more scuttlebutt when it was announced last month that Juan Cruz needed season-ending shoulder surgery, just a few weeks after the Royals had released him despite his solid start? If it wasn’t common knowledge he was hurt, wouldn’t someone have picked him up? I smell something stinky here. Anyone know more about this situation?

Despite all their injuries, the Rockies are hanging around in a tight NL West, sitting just four games off the pace. Obviously, starting pitching has been a key for Colorado, but how about a shout out for the NL’s third best bullpen (3.21 ERA)? Believe it or not, Rafael Betancourt deserves some consideration for your NL-only team given his recent work. He’s tossed shutout ball in eight of his past nine appearances to shave over a run and a half off what had been a very ugly early-season ERA.

Sure, the 29 hits allowed in 23 IP doesn’t exactly scream “add me!,” but take a look at Betancourt’s ratios. He’s fanned 29 batters against just three walks, which is even better command than he showed when he was among the most dominant set-up men in the game during his days with the Indians. We ranked Betancourt as a top 60 reliever in April, but based on his overall body of work, he’s probably 100 or more places behind that. However, look closer and you see a reliever who is racking up the Ks and holds while putting up lots of zeroes lately. That’s a valuable commodity in many formats, and you have to know he’s available in just about every league out there.

By RotoRob
This entry was posted on Saturday, June 19th, 2010 at 10:51 am and is filed under BASEBALL, MLB Today, RotoRob. You can follow any responses to this entry through the RSS 2.0 feed. You can leave a response, or trackback from your own site.