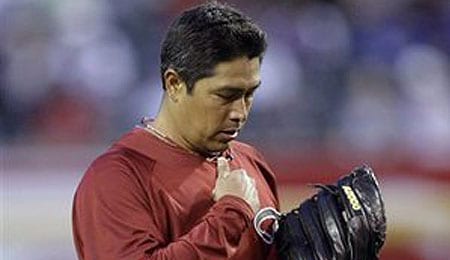 It’s going to take more than prayer to get Rodrigo Lopez through his start against the Yanks Monday.

As shocking as it is to see Rodrigo Lopez with a regular rotation spot on a major league team, it’s even more bizarre to find that he’s actually gained some Fantasy traction.

I’m here to put a stop that.

Five weeks ago, after evening his record at 2-2 with a tidy eight-inning effort in Atlanta, Lopez actually looked like a somewhat decent Fantasy option, at least in an NL-only league or as a streaming possibility for H2H league owners. At that point, half of his eight starts had been quality in nature, and his 3.81 ERA was pretty impressive for a hurler with a career mark a full run above that and one that hadn’t had an effective season since 2004.

Of course, since then Lopez has more or less imploded. His smoke and mirrors act is over. In the six starts since, Lopez only had one quality outing and even in that start he surrendered nine hits over seven innings. The real Rodrigo Lopez – the one who was battered to the tune of a .339 BAA in limited action with the Phils last season – had emerged.

He hasn’t won a game since May 15, was molested for 10 hits (two homers) and six runs in seven innings in Boston last time out and Monday takes the bump against the Yankees. Do yourself a favour: if for some reason you own Lopez, this is a great time for him to be inactive.

For one, Derek Jeter has to be foaming at the mouth with the prospect of facing Lopez tonight. In the five seasons Lopez toiled for the O’s, Jeter abused him at a .448 clip with four dingers and 11 RBI.

And surrendering home runs has not been a problem for Lopez so far this season; in fact, he’s proven to be an expert in this department, having yielding 15 long balls in 14 starts. What do you think the chances are that he’s going to be experiencing some serious whiplash Monday against the Bronx Bombers, one of the top power-hitting teams in the majors?

The D-Backs don’t really have a lot of options to plug into Lopez’s rotation slot, but regardless, you have to think that the 34-year-old is on borrowed time. Hell, I was pretty sure he was just about done after his 2007 shoulder surgery. Now I think it’s ice floe time.

By RotoRob
This entry was posted on Monday, June 21st, 2010 at 4:37 pm and is filed under BASEBALL, Daily Dump, RotoRob. You can follow any responses to this entry through the RSS 2.0 feed. You can leave a response, or trackback from your own site.