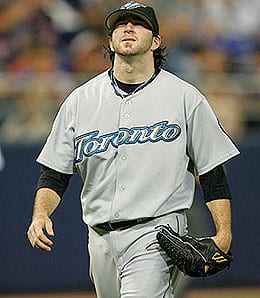 Between Zack Greinke and Shaun Marcum, who is more valuable the rest of the way in a 6×6 league where losses count as a category? I need RBI, homers, doubles and triples, so I’m thinking of dealing either Greinke or Marcum. Which one should I deal and for a player like whom? Manny Ramirez?

Right now you have a situation where I believe you’d have some serious problems getting value back for Greinke. He is struggling right now (4.06 ERA, with 86 hits allowed in 80 IP). Obviously, this is miles from the standards he set for himself last season. His 1-8 record isn’t going to net you very good returns at this stage of the game.

Marcum was on quite a roll until running into the Ray offense Wednesday and getting lit up for seven earned runs in four innings. Even with that disaster, he’s still sporting a great 3.38 ERA. The Jays should at least provide Marcum with some offensive support, something that Greinke won’t get in KC.

My suggestion would be to find a team that has some excess offense with a need for a pitching upgrade and look to move Marcum. He’s currently likely to net you a far better return than Greinke and yet Greinke could easily be the more valuable pitcher from this point on.

As for whom to target, I think you should be able to get a more dependable stick than Manny for either Greinke or Marcum. Assuming you’re going to peddle Marcum and you need power numbers, I’d target someone like Mark Reynolds or Alfonso Soriano. You may have to pony up a spare part and do a two-for-one, but I think either of those should be fair value for Marcum.

The other option is to look to the waiver wire in the interim. There have been several potential great callups this past week, including Mike Stanton and Jose Tabata, that could prove to be assets in the event that you can’t find a trading partner.

By Tim McLeod
This entry was posted on Saturday, June 12th, 2010 at 2:03 pm and is filed under BASEBALL, Dear RotoRob, Tim McLeod. You can follow any responses to this entry through the RSS 2.0 feed. You can leave a response, or trackback from your own site.