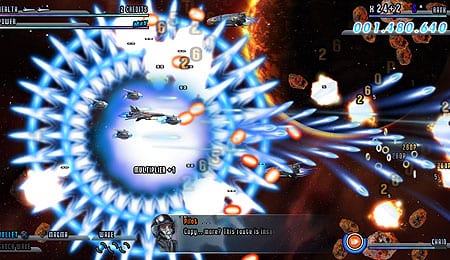 As much as I appreciate the effort that went into making games like Red Dead Redemption and Mass Effect 2, I retain a certain admiration for old-school, side-scrolling shooters. It’s that steady pressure of dodging incoming fire and mowing down a continuous stream of enemies which creates an experience that’s simultaneously nerve racking and gratifying. And I’m happy to say it’s something Soldner-X 2: Final Prototype delivers in spades.

Your ship handles extremely well, allowing you to safely bob and weave through streams of enemy projectiles. The R1 shoulder button is used to cycle through your three available weapons, but all other functions are mapped to the face buttons. You’ll pretty much hold down “X” throughout — in fact, the game suggests as much early on — and that fires your primary gun. Beyond the three functions of your main gun, there’s also a shockwave and a screen clearing limit attack.

The graphics in Soldner-X 2 are fantastic and represent one of the better efforts I’ve seen in a downloadable title. Each of the game’s seven levels offers up a completely different environment, ranging from the ruined remains of an alien civilization to gorgeous snowy caverns. Varying the stages and enemies so much makes each level feel unique, and that really helps keep things fresh. Beyond that, your ship looks great as do the weapon effects and explosions that fill the screen.

A futuristic sounding techno beat accompanies you throughout your missions with little variety. It does a good job of matching the frenetic pace of what you’re seeing on screen, but it’s not memorable. What little voice acting exists during gameplay is decent, and the sounds effects are very good.

Perhaps the most interesting thing about Soldner-X 2 is that it’s both accessible to gamers of almost any skill level (even those that have struggled with side-scrolling shooters in the past) yet highly challenging at the same time. That’s because beyond traditional difficulty settings, the game also has a dynamic ranking system in place that adjusts based on how well (or poorly) you’re playing. Keep getting hit? Look for the game to compensate by sending fewer enemies at you. Breezing through the level and killing everything in sight? Expect an onslaught.

The combat here is surprisingly involved as you’ll be tasked with not only evading enemy fire and destroying them, but also swooping in to collect a wide array of power ups and chain rings that do things like restoring health, increasing weapon power and granting score multipliers. My favourite power up is the chaser — a small ship that hovers around your main vessel and lends its weapons to the battle — and you can acquire up to four of them to really increase your firepower.

Another difference between Soldner-X 2 and the older adapted arcade shooters is that your ship can actually absorb damage. Considering the number of projectiles the game will be asking you to dodge, that’s unquestionably a good thing. It’s also another reason less skilled players can feel good about taking the plunge. Boss battles, however, remain gloriously intact. Each level ends with a massive foe standing between you and advancement, and those showdowns are a blast.

There are seven levels in all, though only the first four are available from the beginning. To access the last three stages you’ll need to find several hidden keys. Each level contains five of them, though only four are required to move on. This built in treasure hunt all but ensures you’ll replay these levels at least a few times before unlocking the complete game and witnessing the true ending.

Things don’t stop there, however, as there are several more items to unlock. This includes additional challenges, difficulty settings, weapons and even a third ship. There is even a progressive leveling system based on how many enemies you’ve killed. Advancing gives you additional credits (read: continues) to use during gameplay. It’s all set up very well and gives you plenty of reasons to keep playing.

It’s difficult to find much fault in Soldner-X 2: Final Prototype as even the relatively short length is supplemented by the game’s numerous challenges. Its dynamic difficulty and eminently palatable price tag (US$12.99) make it a great value even for those that would normally steer clear of a “shmup.”

By Herija Green
This entry was posted on Friday, June 11th, 2010 at 10:57 am and is filed under Herija Green, Video Game Reviews. You can follow any responses to this entry through the RSS 2.0 feed. You can skip to the end and leave a response. Pinging is currently not allowed.