MLB Today: Theriot-ing it Up 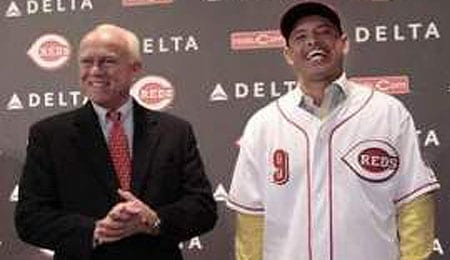 Orlando Cabrera (right) is now leading off for the Reds.

Cincy has won three of its past four to finish 4-2 on its current homestand. The Reds have shaved St. Louis’s lead to 3.5 games in the NL Central. The Cubs are headed in the opposite direction, having lost four of five. Hell, they’ve dropped to fifth in the Central, a half game behind the Pirates. ‘Nuff said.

Ryan Theriot, a dude we said would be a good last-round flier, is proving us right. With a single Sunday, he’s delivered hits in 16 of his past 17 games to raise his BA from .222 to .336. It’ll do. Theriot’s little extra-base pop surge last year was apparently an anomaly, but you combine his runs, steals, BA plus the fact that he’ll soon qualify at both SS and 2B, and he’s a must-own commodity now.

For the Reds, Orlando Cabrera has also heated up, singling to run his hit streak to four straight and five of the past six. He’s batting a robust .360 with a homer and a steal in the past week, and more importantly has moved into the lead-off spot, taking over from the struggling Drew Stubbs. There’s a good chance Cabrera is still on your wire, and with him hitting atop a Reds’ lineup that has showed modest improvement this year, he’s likely to score plenty of runs.

Cleveland snapped a five-game losing skid and a streak of 10 consecutive losses to Detroit with the win. This slide by the Indians has dropped them to fourth in the AL Central, a half game behind the White Sox. The Tigers have been playing well lately, but not well enough to stop from losing ground on blazing Minnesota. Detroit is now 3.5 games back of the AL Central-leading Twins.

Can we please gush over Austin Jackson for a moment? All he did Sunday in five at-bats was lash another two hits and score another pair of runs, yet his on-base percentage actually dropped to .420, giving you some kind of indication of how freaking good this kid has been. He’s hit safely in 10 straight games, raising his average to .371, best in the American League. Can you believe it’s only been five weeks since we pegged him as No. 79 among all outfielders in our pre-season rankings? He’s played like a top 15 flyhawk so far this year, and the way he’s scorching, Jackson could be among the top 10 outfielders in the game before long. Uh, wow.

One player who has not quite met our pre-season expectations is Indian shortstop Asdrubal Cabrera. He was 0-for-5 with three whiffs Sunday for his second straight hitless effort. In fairness, Cabrera had been kicking it up a notch before this weekend’s action, but overall, his numbers are down this season, and he’s probably about five spots below the No. 13 slot where we put him among shortstops in our pre-season rankings. Four RBI and just one steal through 26 games? Small wonder Cabrera is winding up on wires in very shallow leagues.

Tim Lincecum continues to dominate, but can’t buy a win lately as the Giant pen blew a two-run lead sending the ace to a third straight no-decision. San Francisco won it in the end, though, and finished up its East Coast swing an impressive 4-2, pulling within a half game of the Padres for the NL West lead. The Mets, meanwhile, had their own impressive run end, as the loss snapped a nine-game home winning streak. They’re now only tied for second with the Nats in the NL East and have fallen two games behind the surging Phillies.

For the Mets, reliever Fernando Nieve worked two-thirds of an inning for his third straight scoreless outing. I was kind of hoping he’d land a rotation spot, as he really impressed me last year before getting hurt, but he’s been almost unhittable (.190 BAA) as a reliever. His control remains an issue, but with the usual increase in strikeouts that comes from a bullpen gig, a decent ERA, five holds and a win so far, Nieve could soon be someone you’ll want to consider adding in deep NL-only leagues where holds matter.

Ryan Rohlinger, the man called up when Edgar Renteria went on the DL, saw his first action of the year Sunday, starting at third place and going 1-for-2 with a RBI and a walk. He’s had a couple of brief runs on the Giants the last two years and the 26-year-old deserved another look given his fine play at Triple-A so far. The team’s sixth rounder from 2006 had scored 15 runs through 25 games with Fresno, racking up an impressive 948 OPS. Rohlinger is mostly a third baseman, but he could see some action at shortstop, where Juan Uribe is currently starting for Renteria. Rohlinger is a good contact hitter, having whiffed just three times in the last 10 games at Fresno while batting .359 with five doubles and two dingers.

By RotoRob
This entry was posted on Monday, May 10th, 2010 at 7:33 am and is filed under BASEBALL, MLB Today, RotoRob. You can follow any responses to this entry through the RSS 2.0 feed. You can skip to the end and leave a response. Pinging is currently not allowed.