The Wire Troll: A Starlin is Born 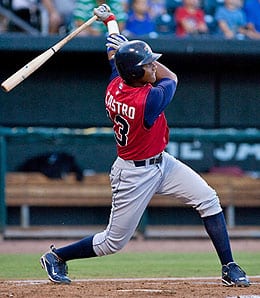 If Starlin Castro had any jitters in his debut, it sure as hell didn’t show.

This past week, one of my favourite lines was again proven to be not worth the paper it’s printed on. “We aren’t in any hurry to rush him to the bigs,” sort of got tossed out the window when the struggling Cubbies promoted Starlin Castro to the Show. If I had a dollar for every time I’ve heard that statement only to be witness the opposite happen, I’d be a very wealthy man, and would likely use my new-found riches to corner the market on Gummy Bears…but that’s another story.

Without further ado, let’s take a look some of the very intriguing options for our Mother’s Day edition of the Wire Troll.

Starlin Castro, SS, Chicago Cubs: The 20-year-old phenom introduced himself to the Chicago faithful in a rather huge way. In his debut, Castro slugged a three-run homer and went 2-for-5 with six RBI, a new record for a . major league debut. Not a bad way to acclimatize yourself to the bigs. At Double-A Tennessee, he managed one homer, 20 RBI and an incredible .376 BA in 109 AB. The kid seems to be ready and the job is his so be prepared to spend some of that FAAB cash this weekend.

Jhoulys Chacin, SP, Colorado Rockies: The 22-year-old was recalled to replace the injured Jorge De La Rosa and is off to an incredible start. Two starts, two wins, and he has yet to allow a run. Toss in the seven strikeouts per start and Chacin is justifying his lofty status as a Rockie prospect. The 7.9 K/9 over his minor league career bodes well for continued success in this category. Spend the cash and burn the waiver wire priorities for the young righthander. And don’t worry about him losing his job once De La Rosa or Jeff Francis is ready; the way Chacin is pitching, it could be Greg Smith who gets farmed out when the Rockies’ starters are ready to return.

Derek Holland, SP, Texas Rangers: An injury to Matt Harrison has opened the door for the owner of one of the nastiest sliders in the game to make his 2010 debut this week. Down on the farm, Holland has been lights out. In 38 2/3 IP, he’s sporting a 4-1 won-loss record with a miniscule 0.93 ERA and 0.98 WHIP. The 23-year-old southpaw has nothing left to prove in the minors at this stage of his career. The potential is so high that even if this turns into just a temporary gig, Holland should be owned in all formats. Isn’t it incredible that the Rangers actually have depth at the starting pitcher position these days?

Justin Masterson, SP, Cleveland Indians: The former BoSox starter has performed solidly in five of his six starts so far this season. The lone exception being his April 25 outing against the Athletics where he got hammered to the tune of seven earned runs. In 32 2/3 IP, Masterson has 39 strikeouts, but still walks t0o many with 15 thus far. He’s certainly worth of an add in all formats — just keep the win expectations down to a dull roar as the Tribe offense isn’t going to give him much in the way of run support.

Carlos Santana, C, Cleveland Indians Through 60 at-bats, Lou Marson is still scuffling along with no homers or RBI and a batting average hovering around the Mendoza line. Mike Redmond is no better than a back-up catcher at this stage of his career. This brings us to Santana who, in 92 at-bats at Triple-A Columbus, has slugged five homers, driven in 24 and is tearing the cover off the ball to the tune of a .315 BA. It appears that the only thing we are waiting on is the service clock. Indian fans are already clamouring to see their top prospect, so if Santana is available in your league avoid the rush and get him rostered and stashed away on your bench.

Scott Olsen, SP, Washington Nationals: The 26-year-old southpaw carried a no-hitter into the eighth inning Thursday and is pitching very solidly so far this season. Two wins in his last three starts should get your attention.

Scott Hairston, OF, San Diego Padres: In limited at-bats, Hairston has managed to hit 17 homers in each of the past two seasons. He’s off to a decent start in 2010 with six homers and three thefts and lately has been showing up at the top of the Padre batting order. With just a 6 per cent ownership in CBS leagues, obviously a lot of people are missing an opportunity.

Brandon Morrow, SP, Toronto Blue Jays: In his past four starts, Morrow has amassed 34 strikeouts in 24 1/3 IP with only eight earned runs allowed. The walks are dangerously high, but the punch out numbers alone make him more than worthy of a roster slot in deeper mixed formats and AL-only leagues.

Michael Saunders, OF, Seattle Mariners: Saunders was recalled to provide outfield depth while Milton Bradley takes a break to get his stress related problems in order. Saunders hasn’t gotten off to a great start down on the farm this year, but the speed potential warrants a look-see in AL-only formats.

Mike Aviles, SS, Kansas City Royals: In 20 at-bats since being recalled Tuesday, Aviles is batting an eye-popping .350. Yuniesky Betancourt and Chris Getz should both looking over their shoulders in Kansas City.

Blake DeWitt, 2B, Los Angeles Dodgers: In 2008, DeWitt managed nine homers 52 RBI, and after a slow start this season, appears to be coming around. He’s certainly worthy of a spin in NL-only formats.

Conor Jackson, OF, Arizona Diamondbacks: Jackson was just activated off the DL Saturday and if your Fantasy squad is in need of a solid batting average and mid-teen power, find a home for him on your active roster.

Kevin Frandsen, 2B, Los Angeles Angels: The much travelled Frandsen started at the hot corner Saturday in place of Brandon Wood and went 3-for-4. Frandsen could see an increase in playing time as the underachieving Wood has now gone hitless in eight of his past 10 games.

Gaby Sanchez, 1B, Florida Marlins: Two homers, 16 RBI and a .275 BA make Sanchez a solid option in both deeper formats and NL-only leagues.

By Tim McLeod
Tags: Starlin Castro
This entry was posted on Sunday, May 9th, 2010 at 4:32 pm and is filed under BASEBALL, The Wire Troll, Tim McLeod. You can follow any responses to this entry through the RSS 2.0 feed. Both comments and pings are currently closed.