Is Jason Bay Ready to Rock? 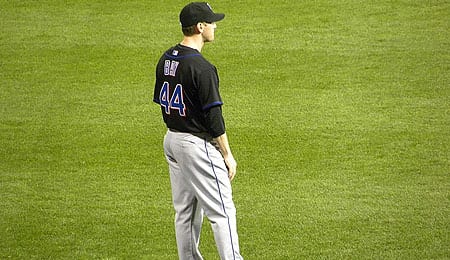 A slow start to his Met career has made left field a very lonely place for Jason Bay.

Jason Bay sure isn’t delivering on the Mets’ four-year, US$66 million investment so far, is he? We ranked this dude as a top 10 outfielder in the preseason, but he’s barely been a top 75 at his position so far. He’s being very aggressive, with the lowest P/PA of his career, and as a result his walk rate is obviously down (to its lowest level since 2007). Unfortunately, this lack of patience isn’t working as Bay has managed just one homer, 14 RBI and an extremely disappointing 735 OPS through 31 games.

Having said that, the Canadian slugger is showing some modest signs of life. He’s hit in four straight games, and while the five overall hits in this run is nothing to jump for joy over, it’s been good enough to raise his BA 10 points. He’s got a pair of doubles, one run, five RBI and a pair of walks during this stretch, so perhaps Bay is shaking off his early-season doldrums. May has been his best month in recent years, so if you have a chance to buy low on Bay, you better do it now.

By RotoRob
This entry was posted on Tuesday, May 11th, 2010 at 12:48 pm and is filed under BASEBALL, RotoRob. You can follow any responses to this entry through the RSS 2.0 feed. You can leave a response, or trackback from your own site.