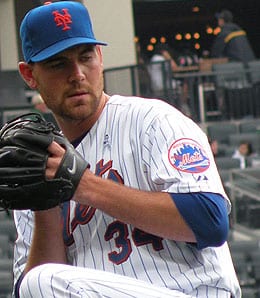 Mike Pelfrey as the No. 2 starter? It could be another long season for the Mets.

After racking up four consecutive winning seasons, the Mets crashed and burned in 2009, suffering through their worst season since 2003. The overall pitching was brutal and the offense struggled to score runs.

Yes, injuries were a large part of the demise of this club, but can we safely say they will rebound in 2010?

Well, the number one question facing this team is starting pitching. Johan Santana, who had to be shut down in August with elbow problems, threw 25 pitches off the mound on Tuesday without any pain. That’s great news, because if Santana isn’t there to lead the rotation for at least 30 starts, the Mets are in serious, serious trouble.

But what about the rest of the rotation? Currently, it consists of Mike Pelfrey, John Maine, Oliver Perez and Jonathon Niese.

Okay, Pelfrey stayed healthy – and that made him a novelty among Met starters in 2009 – but given his regression last year, counting on him to be a No. 2 starter is unwise. Maine and Perez both have struggled with inconsistency and health woes. And while Niese could be ready to take a big step forward this year, he’ll also need to prove he can avoid the injury bug. If he can’t get the job done, perhaps Fernando Nieve would be a viable solution.

Ben Sheets and Jon Garland both found new homes this week, so scratch their names off the list as potential targets. And the cupboard is getting empty quickly, with uninspiring options remaining like Erik Bedard, Pedro Martinez, Sidney Ponson, John Smoltz, Jarrod Washburn and Chien-Mien Wang. Apparently, the Mets are most interested in Smoltz from that list. And while he was decent with the Cards, they don’t want him back, so that should tell you something.

Apparently, the Mets were really driven to mold the 2010 team into one that would succeed on speed, defense and pitching. Well, we have yet to see them make improvements in the pitching staff, and the big offensive addition this offseason has been Jason Bay, a player no one would call a speedster or Gold Glove candidate. Considering how much they invested in Bay, it’s not unreasonable to wonder if the Mets should have used some of that money to boost their pitching staff.

They also tried to lure Bengie Molina away from the Giants, but last week he re-upped with San Francisco. Molina isn’t exactly a speedster either – in fact, many consider him the slowest individual on the face of the planet – but at least his solid glove would have been a step in the right direction.

Throw in the uncertainly surrounding Carlos Beltran’s health and you’ve got to wonder how the Mets are even going to get back to .500, never mind make a serious run at the Phillies in the NL East.

By RotoRob
Tags: New York Mets
This entry was posted on Wednesday, January 27th, 2010 at 2:55 pm and is filed under BASEBALL, RotoRob, Team report. You can follow any responses to this entry through the RSS 2.0 feed. Both comments and pings are currently closed.