Minor Matters: Help on the Way for Houston? 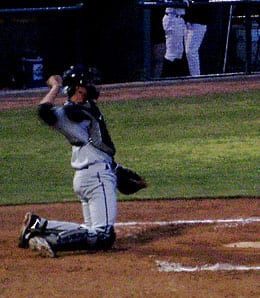 Sure, Jason Castro is a serious keeper, but what else does Houston have on the way?

The Houston Astros have started to dig their way out of an early-season hole by winning the final two games in Chicago this weekend. But even with this modest winning streak, the ‘Stros still find themselves six games under .500, owners of the worst offense and one of the worst pitching staffs in the NL. In a nutshell, it’s going to be a long year in Houston. And yes, we have a problem.

So let’s turn our attention to the future. Unfortunately, the Astro farm system, a couple players from which we discussed recently, isn’t exactly brimming with talent. Catcher Jason Castro looks like the real deal, so hopefully Houston doesn’t rush him the way it did to J.R. Towles originally. Bud Norris has carved out a rotation spot in Houston this year, and while he’ll likely be inconsistent, you have to love his strikeout potential. Ross Seaton is pitching extremely well at High-A, but he’s still at least a full year away.

Today, let’s check out some less heralded players in what could be baseball’s weakest system, even if the team will have you believe that the rebuilding process is underway.

Outfielder Andrew Locke is an interesting player, and he certainly opened some eyes with a great performance in his first Spring Training with the Astros (.316, one double, two triples, one homer and six RBI). A 19th round pick by the Dodgers in 2005, last season was Locke’s first in the Houston organization, and he excelled in his first taste of Double-A, batting .338 with 20 homers and 109 RBI while recording a superb 920 OPS. It was definitely a career year, but given that he was 26, let’s not get carried away. Now 27, Locke has been moved to Triple-A this year and is struggling badly to adjust. He’s in a 1-for-19 skid, dropping him to .094 with no extra-base hits and just one walk. He’s a solid batting prospect, but needs to improve his patience. At this point, he looks like a fourth outfielder at best, providing a decent power bat off the bench.

Minor league veteran Jason Bourgeois joined Houston in the offseason, making it six organizations and counting for the former top prospect. (And that doesn’t include a 39-game stint in Indy ball in 2008). Originally a second round pick by the Rangers in 2000, at the time Bourgeois was an exciting and speedy middle infielder that Texas thought enough of that it sent him to the AFL in 2003. Well, that seems about a million years ago. Now 28, Bourgeois finally did make it to the Show in 2008, and last year saw his most action in the bigs, batting .189 with three steals in 24 games. He definitely has great speed, so remains an intriguing option as a pinch runner, but he’s now strictly an outfielder that has no pop. Still, Bourgeois enjoyed a big spring with Houston, batting .321 with four steals, and was one of the team’s last cuts. He’s absolutely tearing it up at Triple-A Round Rock, batting .359 with 10 steals in 10 games, and Saturday was the first time all year he didn’t reach base. You can expect Bourgeois to make an appearance with the parent club at some point this year should an injury to an outfielder necessitate a move, but unless he’s playing full-time and swiping a crapload of bases, he’ll probably never have Fantasy value.

One outfielder who really interests me from a keeper league perspective is T.J. Steele, Houston’s fourth round pick in 2008 out of the University of Arizona. This kid, just 23, has some serious tools, and he could be patrolling the outfield in Houston by 2012. His major asset is speed as evidenced by the 49 steals he racked up his final two years with the Wildcats. Unfortunately, patience is not his thing: he walked just nine times against 40 strikeouts in 50 games at High-A last season, although that didn’t stop Steele from batting a robust .345. He looked awesome in Spring Training, going 5-for-14 with a pair of doubles and two swipes, but has started slowly at Double-A, batting just .250 through 10 games with two walks against 10 strikeouts. The athletic Steele is definitely someone worth watching this season and you can expect him to pop up on prospect lists heading into 2011 should he continue to develop.

One name that jumped out at me in the Houston system was Matt Kata. Remember him? The Diamondbacks’ ninth round pick way back in 1999 caused a bit of a stir when he first arrived in the bigs, but he’s essentially morphed into a Triple-A veteran who gets the occasional call to the Show to help out a team’s bench. The last time we checked in on this 32-year-old second baseman was way back in November 2006, when he was playing in the Mexican League and I assumed he wouldn’t even make it as a utility dude for the Rangers. I was wrong, as Kata did see 31 games of action in Texas that season before moving to the Pittsburgh, where he was actually a somewhat useful bench player. Kata is yet another Astro farmhand with good speed (18 swipes in 2008 at Triple-A), but no patience. He exploded Sunday with a 3-for-4, two-run game, but that showing lifted his BA all the way up to .171. Need I say more?

By RotoRob
This entry was posted on Monday, April 19th, 2010 at 3:55 pm and is filed under BASEBALL, Minor Matters, Prospects, RotoRob. You can follow any responses to this entry through the RSS 2.0 feed. You can skip to the end and leave a response. Pinging is currently not allowed.