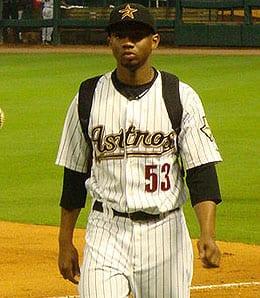 If Wesley Wright can successfully make the conversion to starting, the Astros would have more options.

The Houston Astros, in desperate need of help – both on offense and on the mound – have taken Wesley Wright, a bullpen mainstay for the past two years, and are trying to convert him into a starter. Under the tutelage of Triple-A Round Rock pitching coach Burt Hooton, the Astros are hoping that this 25-year-old lefty, who has made five starts among his 270 career pro games, can make the transition quickly. Damn, they could sure use the help, although on paper their major league rotation isn’t awful.

Wright was a seventh round pick of the Dodgers way back in 2003 and came to Houston in the Rule V draft in 2007. He’s a good strikeout pitcher, having averaged 10.8 K/9 in five seasons in the minors, although you’d expect that figure to drop with him starting. Of course, what Wright really needs to do to succeed, whether as a starter or a reliever, is to improve his control. Last year he walked 25 in just 44 2/3 IP with the Astros, and that was actually an improvement over his rookie season when he issued 34 free passes in 55 2/3 IP. In his first start of the season for Round Rock, Wright wasn’t awful, giving up just one earned run (and one unearned run) in four innings, but the six hits and two walks against just two strikeouts tells me he has a long way to go.

Wright will get another crack Saturday night to show that he has a future as a starter.

After he was molested with the Braves in 2008, we assumed that Elmer Dessens would never see the light of day in the majors again. Well, we were wrong. Last season, Dessens bounced back and forth between Triple-A Buffalo and the Mets, and was superb while acting as a closer in the minors and did a very fine job with the Mets pitching in middle relief. It was enough for him to earn another minor league deal from the Mets this winter, and while he didn’t make the team out of Spring Training, he looks excellent again at Buffalo, earning a pair of wins already in middle relief. He’s now 38 years old, but should injuries strike what’s actually been a solid Met bullpen, Dessens could see more action in New York this year. That doesn’t mean he’ll ever have a sniff of Fantasy value again, but he’s sticking around longer than I thought he would.

So? Is John Smoltz done or not? The Mets considered him this offseason, but he wound up going into broadcasting. And while he says he’s 99.9 per cent sure he’s done, he hasn’t officially announced his retirement. Smoltz’s deal has an out should he opt to come back, so would it shock anyone if come midseason a contender comes calling and tries to lure him back to the mound for a half-season with the promise of a possible playoff appearance? This is Pedro Martinez, Part II (and, of course, Pedro is going to do the same thing this summer).

Brian Bogusevic is an Astro farmhand we’ve been keeping tabs on, but mostly out of curiosity as he converted from pitcher to outfielder. The 24th overall pick in 2005 had a big start to the year, but has cooled considerably with three straight hitless games. I can’t see him ever being more than a bench player at this point. Rick Ankiel, the Sequel, he is not.

One Astro minor leaguer we’re starting to give up on is Jeremy Johnson. The 27-year-old righty was an 11th round pick by the Tigers way back in 2000 and he’s been stuck at Triple-A in a swingman role for the past three seasons – until this year, as he’s now back at Double-A. And considering how badly he was bitch-slapped in his first start, Johnson is not ready to head back to Triple-A, much less think about his major league debut. He’s done a good job of keeping the ball in the park in his nine-year minor league career, but has never been much of a strikeout pitcher. I’d say he’s about ready to give Indy Ball a shot.

What the hell happened to Oswaldo Navarro? The Mariner product got to Seattle for four games in 2006, but hasn’t been back since. In fact, he struggled so badly offensively at Triple-A last year, that he wound up spending most of the year at Double-A. Ugh. Now, he’s in the Astro system and while he’s on the roster of the Triple-A club, he has yet to appear in a game this season. There’s no report of the 25-year-old being hurt, and while he’s been a decent contact hitter, this pop-free shortstop doesn’t look like he’ll ever get a shot with a major league club.

By RotoRob
This entry was posted on Saturday, April 17th, 2010 at 3:21 pm and is filed under BASEBALL, Fantasy Notes, RotoRob. You can follow any responses to this entry through the RSS 2.0 feed. You can leave a response, or trackback from your own site.