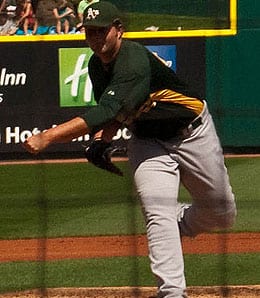 Is Brett Anderson worth keeping at $15?

I can only keep three of these four players in a 10-team AL-only league. Which players would you keep at these prices?

Thanks for asking us to take a look at your potential keepers for 2010. I think the easiest approach here is a very simple one. The relative dollar values for all four players you are contemplating keeping are all in the same range. I don’t see where they should be considered as big difference makers in the decision making process. In your specific 10-team format there will be a total of 80 players kept based on the information you have forwarded to me.

Let’s take a look at a recently completed AL-only draft and use it as a rough reference. Last week I had the pleasure of partaking in the KFFL AL-only expert league draft. Some of the other participants included representatives from Mastersball, BaseballHQ, RotoWire, Fox Sports, and RotoExperts, so it was a great field. The players that you are contemplating keeping went as follows;

As much as I love the upside potential of Anderson, I think your best choice is to keep the three bats. You already have a great start on your pitching with Greinke and Lester. Being that your league has an auction format, should you determine that you want to re-acquire Anderson the relative cost should be much more palatable than any of Butler, Span, or Ramirez.

I think you’ll find that your pitching options after all the teams have declared their keepers in this format will be much stronger than the batting options. Now, not being privy to every keeper and their relative costs, this could change, but I highly doubt it.

As much as I hate to see a player with Anderson’s upside and potential being tossed back into the pool, in your set of circumstances I see it as your best option in building a winning team for 2010. Thanks for submitting your question and all the best with your Fantasy play in 2010.

By Tim McLeod
This entry was posted on Friday, March 19th, 2010 at 7:18 pm and is filed under BASEBALL, Dear RotoRob, Tim McLeod. You can follow any responses to this entry through the RSS 2.0 feed. You can leave a response, or trackback from your own site.