The Wire Troll: Time To Wake Up! 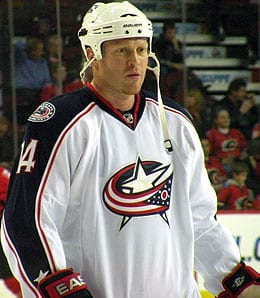 If Raffi Torres lands with a contender, he could be quite valuable down the stretch.

Okay, so you were playing a variety of Fantasy Olympic Hockey leagues that were out there. Maybe it was Rinkotology or one of those DobberHockey leagues. Either way, it is pretty much time to get back into the stretch run that is the last six weeks of the Fantasy Hockey regular season. Remember just two weeks ago when we went on our little vacation? Well, that time is over and quick. I have to admit it was nice to have a couple weeks off…sort of. What did I do on my vacation? Well, here is some of what was actually accomplished.

I did manage to grout some tile in the bathroom that needed it. Also, I went down the Jersey Shore and shoveled enough snow to fill a soccer field, or at least it felt like it. Then I shoveled a couple times at the house as well. I think that was just to get an extra workout in or maybe Mother Nature was seriously ticked off. There were even some killer meals made that were purely homemade. Legend has it, baked ziti, stuffed eggplant parmigiana, and several other high quality meals were cooked. Saturday, however, was a simple pizza and beer night to get ready for the Fantasy stretch that awaits us all.

It is not the normal six week dash that comes March 1 every year now. With the Olympics, the schedule is condensed tighter than any can of sardines ever could be. You will see some teams play 15, 16, even 17 times in the month of March. Add in the Trade Deadline on Wednesday and literally you go from Olympics to a ton of changed lineups faster than a Corvette goes from zero to 60. There is seemingly too much to digest just this week alone for the Fantasy hockey GM. However, let’s not try to worry about that outside stuff and concentrate on those players who you may be able to nab off the wire this week. Maybe we’ll fret over some of the player upheaval next week.

Raffi Torres, LW, Columbus Blue Jackets: He will not be in Columbus after Wednesday and if he is, I will be very shocked. Torres may only have 99 shots on goal but he has 19 goals (almost a 20 per cent success rate). Honestly, that is hard to pass up and, really, he is the perfect second tier trade for teams to make. A contender could squeeze another 10-to-12 goals out of him and that may be enough to give you that final push in your league. Torres has seven goals on the man advantage which is another good selling point. He is also available in at least 90-to-95 per cent of leagues and as many as 97 per cent in ESPN leagues. Go out there and get this guy before Wednesday because someone will and it might as well be you.

T.J. Galiardi, LW, Colorado Avalanche: He will still be on the first line when the Avs come back to play this week, so you may want to get him now before others realize this. Yes, his season has been a bit up and down, but you have to expect that from youngsters. Playing with Paul Stastny cannot hurt, however. Hey, the 26 points in 51 games is decent for someone that has only been picked up in 2-to-5 per cent of most leagues and as low as 1-to-2 per cent in ESPN leagues. The reality is you could do worse and Galiardi is a perfect fill-in for a third or fourth left winger as he is relatively off the radar. The next guy we look at may not be quite as much.

Alexander Steen, LW, St. Louis Blues: I keep waiting for this guy to truly break out as he has all the potential in the world to do so. So what happens? The St. Louis Power Play goes MIA for most of the season which has undoubtedly hurt Steen’s production some, or at least I think it has. Twenty-eight points in 48 games is pretty decent and his availability is high. A 90-to-95 per cent availability rate means he is out there if you are persistent. This is the type of player you want for March as I think he could score another eight or nine goals before the end of the year, maybe more. The Blues usually put a push together before the season ends and I think this year will be no exception. While they may not make the playoffs, I think Steen will be a main contributor. It is time for him to step up for Fantasy GMs everywhere.

So with the trade deadline coming up Wednesday, there are some very attractive players to keep an eye on. Will Tomas Vokoun be somewhere else and better yet, how about Carey Price? There are many questions this trade deadline considering the most valuable piece of the pie (Ilya Kovalchuk) was traded it seems like months ago. Hopefully you can digest all the movement and keep an eye on it because it may affect your Fantasy team as well.  Until then, see you next week and welcome back to Fantasy Hockey.

By Chris Wassel
This entry was posted on Sunday, February 28th, 2010 at 1:50 pm and is filed under Chris Wassel, HOCKEY, The Wire Troll. You can follow any responses to this entry through the RSS 2.0 feed. You can skip to the end and leave a response. Pinging is currently not allowed.