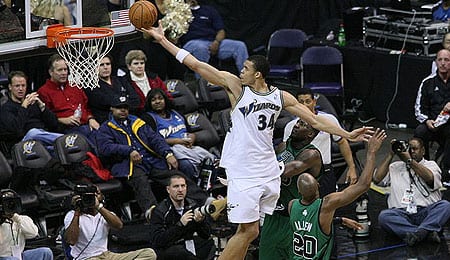 JaVale McGee’s value has exploded with Brendan Haywood traded away.

Welcome to The Wire Troll for Week 18. The NBA trade deadline has come and gone, and what a momentous time it was. Numerous star players changed addresses, and the Fantasy fallout from those deals has already been substantial. Those of you following the Troll on Twitter already know the implications of some of these transactions, but for you lollygaggers we’ll try to reset things again so that you may – may – still be able to take advantage.

In injury news, Brandon Roy, Monta Ellis and Mo Williams are back on the floor, while mega-stars Kobe Bryant and Dwyane Wade are sidelined with ankle and calf injuries, respectively. Both Kobe and Wade’s ailments appear to be short term, but stay up to date on their respective prognoses before setting your weekly lineups. Uber-guard Chris Paul won’t play this week, but his stand-in Darren Collison posted a triple-double Friday night, and he is rapidly becoming an NBA (and Fantasy) star.

Stay up to date on all the late-breaking waiver-wire worthy news by following The Wire Troll on Twitter.

JaVale McGee, Washington Wizards: The trade of Brendan Haywood to Dallas opens up the starting centre’s job for McGee, and the 22-year-old has responded by averaging 11.5 points, nine rebounds and an absurd four blocks in the two games since Haywood left town. He is not playing starter’s minutes yet, but McGee is a very talented shot blocker who should provide big help in at least that category as long as he is seeing a decent amount of run. He’s worth adding everywhere if you need blocks, but be aware that McGee may struggle with some elements of his game as he develops.

D’Andre Jordan, Los Angeles Clippers: Jordan and teammate Craig Smith are vying to fill the void left by the departure of Marcus Camby, but neither has asserted himself as the top man just yet. We like Jordan because of his upside, centre eligibility and shot-blocking talent, and his first game – 14 points, 11 rebounds and three blocks – showed his ability to its fullest. He regressed the following night, but such difficulties are to be expected as the second-year man learns the NBA game. Jordan is a good add in deeper leagues for boards and blocks, while Smith may be added if points and boards are your bane.

Tyrus Thomas, Charlotte Bobcats: Thomas has disappointed Fantasy owners before, but his new digs in Charlotte would seem to fit his game to a T. The ‘Cats were lacking a true four, and Thomas’s skill set should allow Charlotte to turn him loose to wreak the kind of havoc in the lane we know he can create. We saw a glimpse of that in his first game Friday, as he grabbed 12 rebounds and slapped away six Cleveland shots in just over 25 minutes off the bench. Thomas should be owned in every league, as he’s likely to earn a starting job sooner rather than later.

Andray Blatche, Washington Wizards: Stop reading this and go check your league wire for Blatche’s name, and grab him if he’s there. The Troll spilled a perfectly good bowl of corn chips in his haste to tweet you the heads-up on Blatche the moment the Haywood-to-Dallas deal was confirmed, and those tasty chippies died for good reason. Blatche has produced big numbers whenever he’s been called upon for starter’s minute in the past, and with the team’s top four scorers now residing elsewhere, he should be an absolute best the rest of the way. His first two games after the deal should tell you all you need to know: an average of 25.5 points, 12 rebounds, two assists and 1.5 steals. Blatche is also a serviceable shot blocker, having averaged just under one block per game this year. Grab him if you can and enjoy the ride.

Taj Gibson, Chicago Bulls: The departure of Thomas pretty much eliminates any competition for Gibson at the four, and the rookie should see heavy minutes the rest of the way. Centre Joakim Noah continues to struggle with plantar fasciitis, and Brad Miller’s best days are behind him, so Gibson should pile up plenty of boards and blocks as the season wanes. Though he has scored 14 points in each of the last two games, boards and blocks are what Taj does best – though a few double-doubles now and then would be appreciated. Newcomer Hakim Warrick may grab a few of Gibson’s minutes, but we don’t see him as a legitimate threat for time.

Beno Udrih, Sacramento Kings: The Kevin Martin trade leaves a bit of a logjam in the Kings’ backcourt, but Udrih and starting point guard Tyreke Evans built a nice chemistry while Kev-Mart was on the shelf earlier this season. Francisco Garcia may cut into Udrih’s minutes, but Udrih looks like a safe bet for playing time at least in the short term. Keep an eye on Garcia as well, and he’s worth adding in deep leagues for his three-point shooting talents.

Sergio Rodriguez, New York Knicks: If you have any riverboat gambler in you, Rodriguez is the kind of all-in, buy-low pick that could lead to a Fantasy jackpot this spring. The Knicks’ point guard situation has been nothing short of atrocious this season, and the word is that coach Mike D’Antoni sees the 23-year-old Rodriguez as the cure for his team’s backcourt ills. Rodriguez has started only 14 games in his four-year career, averaging 7.3 points, 4.8 dimes and 0.9 treys per contest. If he indeed is handed the keys to D’Antoni’s offense, Rodriguez could be a Fantasy star by the end of the season. Stay tuned…or act now if your team needs a jump start.

Rasual Butler, Los Angeles Clippers: Butler appeared in the Troll earlier this season, but the trade of Al “never met a shot I didn’t like” Thornton should open up more looks for Butler – who was already having a nice season. Butler is owned in only about 30 per cent of Yahoo! leagues, and he makes a fine addition if your Fantasy team is in need of points or treys.

C.J. Watson, Golden State Warriors: Watson has been blowing up lately, tallying a career-high 40 points Wednesday, then racking up 22 on Friday. Though those numbers would seem to warrant an immediate pickup, be aware that most of Watson’s production is tied to the recent injuries to Monta Ellis and Corey Maggette. Both stars are back in action, though Ellis still looks shaky, so Watson’s run could be short-lived. If you’re in a deep league, grab Watson and watch how his minutes shake out. If you add him in a normal-sized league, be prepared to cut bait if and when Maggette and Ellis get back to full speed.

By Buck Davidson
This entry was posted on Saturday, February 20th, 2010 at 5:31 pm and is filed under BASKETBALL, Buck Davidson, The Wire Troll. You can follow any responses to this entry through the RSS 2.0 feed. You can skip to the end and leave a response. Pinging is currently not allowed.