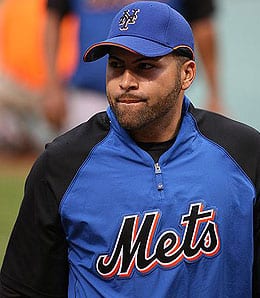 As things currently stand, Omir Santos is the best catching option the Mets have.

When we last checked in on the Mets, we talked about their failure to land Bengie Molina. But what we didn’t mention was that this left them with the following catching options: Omir Santos, Chris Coste and Henry Blanco. Are you Fantasy owners drooling over those backstops? Yeah, I thought not. Now there’s word that the Mets are after Rod Barajas. Well, given that he smacked 19 dingers last year, I suppose he’s a better choice than anyone they currently have. But a legitimate solution? Uh, maybe for a little while. Met fan better pray that Josh Thole makes major progress this year and is ready to take over the job by the second half of the season.

Are the Giants serious? They’ve brought in Todd Wellemeyer on a minor league deal with the purpose of having him compete with uber prospect Madison Bumgarner for the fifth starter job. Look, either just keep the kid in the minors for another year of development, or hand him the job. But don’t bother putting a speed bump like Wellemeyer in his way. Here’s the unedited version of what I had to say about Wellemeyer in this year’s Fantasy Baseball Guide: “Those who feared 2008 was a fluke were bang on as Wellemeyer absolutely crashed and burned, finally losing his rotation spot late in the season. He was beaten like a step child, getting hit harder than at any time during his career. Case in point: the ERA for Wellemeyer’s best month of the season was over a half run higher than his overall mark in 2008. ‘Nuff said.” Needless to say, I’m not bullish on Wellemeyer’s prospects of returning to Fantasy relevance. Just give the job to Bumgarner – stop worrying about his service time clicking in. Hey Giants, you have a legitimate shot to be in the playoff picture this season, especially if you find a bit more offense, so don’t fuck around – put your best team out there.

It’s been nearly a year since I last checked in on the volatile Carl Everett, so I feel the need to update our readers. He’s still toiling in Indy Ball, and enjoyed another strong season, batting .315 in 109 games. However, the extra-base pop is definitely waning and he hasn’t had any legitimate speed for many years. Now 38, it’s become clear that Everett will never again wear a major league uniform. If he’s truly done, he finishes his 14-year big league career as a .271 hitter with 1,304 hits in 1,405 games. He mashed over 200 dingers and swiped over 100 bases in his career, with personal bests of 34 homers in 2000 for Boston, and 27 steals with a .325 BA for the Astros in 1999.

By RotoRob
Tags: New York Mets
This entry was posted on Wednesday, February 17th, 2010 at 6:29 pm and is filed under BASEBALL, Fantasy Notes, RotoRob. You can follow any responses to this entry through the RSS 2.0 feed. Both comments and pings are currently closed.