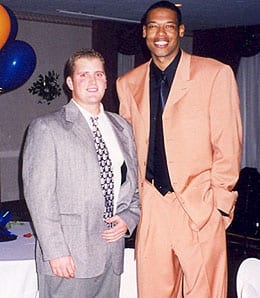 The trading of Marcus Camby (who is not the portly white dude in this pic) helped spark a ton of NBA deals.

Today is going to be a very busy and exciting day for NBA fans as so many players will be changing teams or at least be rumoured to be doing so.

We’ve already seen a flurry of activity in the past week with the big Mavericks-Wizards deal and the Marcus Camby trade, among others. And late Wednesday, early Thursday morning, several other trades shook the landscape. Here’s a rundown of the big three:

While Tracy McGrady didn’t wind up in New York as everyone had expected, that ship has not sailed yet. T-Mac was dealt to the Kings in a seven-player trade, but may still be flipped before the Thursday 3 p.m. EST deadline to New York. McGrady must be feeling very unwanted these days, but Fantasy owners who scooped him up are going to want him a hell of a lot more if he’s on the free-wheeling Knicks.

Heading to Sacramento along with McGrady are Carl Landry (a great building block for the Kings) and rookie Joey Dorsey, while the following Kings are on their way to Houston: Kevin Martin (who immediately becomes the No. 1, 2 and 3 scoring option for the Rockets and likely ruins Trevor Ariza’s chance to be a stud in the second half), Kenny Thomas (is he still in the NBA?), Hilton Armstrong (who joins his third team of the season; think he’s having some identity crisis issues?) and Sergio Rodriguez (who deserves more PT, but just can’t seem to get it and I can’t see it happening in Houston).

The Knicks had offered Jared Jeffries, Jordan Hill, Larry Hughes and draft picks for T-Mac; will the same deal be on the table for the Kings if they try to flip McGrady to New York?

I love the Kings’ acquisition of Landry and am very surprised the Rockets gave him up. But you’ve got to give up something to get something, and with the Rockets’ offense middling at best, Kev-Mart is exactly what they need.

In Sacramento, Jason Thompson and Spencer Hawes will suffer with the addition of Landry, while Andres Nocioni will fall off the radar even further – he’s already almost out of the rotation, so it won’t be much of a fall.

Meanwhile, the Bulls have ridded themselves of 2010-11 salary by dealing John Salmons to the Bucks for the expiring contracts of Francisco Elson and Kurt Thomas. Salmons – who has been horribly inconsistent in Chicago – should have more value in Milwaukee. In Chicago, without Salmons, Luol Deng and Kirk Hinrich will get all the burn they can handle. In Milwaukee, Charlie Bell should shift to the bench (not that anyone cares), but I’m worried about how Salmons’ arrival will affect Carlos Delfino, who has been a real revelation off the wire this season. Delfino has been seeing heavy duty minutes, so I’m going to see how this shakes out for a few games before panicking. If he continues to get close to 30 MPG, he’ll be fine, but if that starts to dip down to 25 or less, owners may need to rethink keeping him.

Clearly, this move is designed to allow the Bulls to go after big-name free agents this summer.

Cleveland was also busy on Wednesday, but it wasn’t about acquiring long-time trade target Amare Stoudemire. Instead, the Cavs landed Antawn Jamison from Washington and Sebastian Telfair from the Clippers. Heading to Washington is Zydrunas Ilgauskas, Al Thornton, a 2010 first rounder and the rights to Emir Preldzic. The Clippers, meanwhile, get Drew Gooden, traded for the second time this week.

This is a fantastic move for the Cavaliers, giving them another great scoring option that can light it up from outside, and they managed to retain J.J. Hickson – meaning their frontcourt remains extremely deep.

So it looks like Stoudemire will stay with the Suns, unless the Heat can somehow come up with a more tantalizing package. Some suggest Miami isn’t really interested in Stat, but is rather making a half-hearted attempt to land him in order to show Dwyane Wade that the organization wants to better itself. Ya, right.

Back in Chicago, obviously Tyrus Thomas and Brad Miller are not headed to Houston for McGrady, so does that mean they are staying put or will the Bulls package one or both of them in another deal?

Keep your eyes open this afternoon. Moves made today could have a great affect not only on the players moved, but on their old and new teammates, so you have to be prepared to react quickly.

By RotoRob
This entry was posted on Thursday, February 18th, 2010 at 10:08 am and is filed under BASKETBALL, RotoRob, Transactional analysis. You can follow any responses to this entry through the RSS 2.0 feed. You can skip to the end and leave a response. Pinging is currently not allowed.