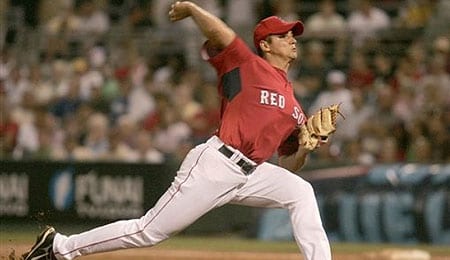 Every season around this time of year, I find it fascinating to see some of the ex-big leaguers and failed prospects who pop up in Independent ball.

Take Kyle Jackson, for instance. The former Red Sox prospect looked like a future bullpen candidate in 2006 when he went 3-1, 2.70 with a save at Double-A and was added to the team’s 40-man roster. Yes, he had serious control problems (26 walks in 36 2/3 IP), but he also struck out almost a batter per inning. The 2001 32nd round pick got hit harder the following season, and last year, he managed to improve his control as a swing man, but his Ks dipped and he was released after spending six seasons in the BoSox organization. Jackson caught on as a starter late last year with Worcester of the Can-Am League, but his command was awful. This year, he’s landed in the Atlantic League with the Bridgeport Bluefish, and the recently turned 26-year-old is showing that he still has some life left, going 4-1, 3.06 through six starts with one complete game. He’s only struck out 16 batters in 35 1/3 IP, but he’s been pitching to contact and it’s worked, as Jackson’s control has been much better. It’s not too late for him to earn himself another chance at organized ball (he failed in Spring tryouts with the Jays and Phillies), especially if he can start missing a few more bats without sacrificing the control. His current manager – Tommy John – knows a thing or two about pitching, and so far Jackson is responding well.

Carl Everett, who played 1,405 games in 14 big league seasons, is now in his third season of Atlantic League ball, and his numbers have improved each season. Could the soon-to-be 38-year-old DH find his way back to the Show? Through 24 games, he’s 30-for-84 with 16 runs, four doubles, four homers, 16 RBI, 21 walks and 15 strikeouts with a superb .481 OBP. I’m sure there are a few teams that could use a batting eye like that. Seattle, for instance, where Everett struggled in his last MLB season in 2006, could probably again use his services in a limited capacity. I mean, come on, Everett would have come a hell of a lot cheaper than Ken Griffey, Jr., and probably wouldn’t be doing too much worse. Okay, maybe he would.

In the wake of the steroid scandal, Jay Gibbons had to use Indy ball last season to springboard his way back to organized ball. He advanced back to Triple-A in the Milwaukee organization, but never did make it back to the majors. This year, the Marlins gave him a chance, but cut him in Spring Training, so Gibbons is back in the Atlantic League with Newark. However, a 14-for-71 start isn’t going to draw anyone’s interest this year. He’s just 32, and is a lifetime .260 hitter with 121 homers in 779 big league games, but how much of Gibbons’ success was thanks to PEDs is a valid question considering how far he’s fallen.

A new name popped up in the Atlantic League this season when Tim Raines, Jr. joined Newark after 11 minor league seasons and 75 big league games spread out over three different seasons (he last appeared in the Show in 2004). I was a little surprised that Raines didn’t get another crack at the majors in 2007, when he hit .333 and stole 21 bases in 100 games in Triple-A for the Astros’ organization, or last year, when he flashed more power than ever before (18 homers, 28 steals, .311) at Triple-A Tucson in the Arizona organization. The White Sox signed him to a minor league deal in March, but he never did play in the system this year, so was ostensibly cut. Raines played just four games with 21 at bats for Newark and he struggled. From what I gather, he headed to Taiwan to continue his career. Whatever the case, it appears that even though he’s just 29, the Orioles’ 1998 sixth round pick is never going to reach his potential. Clearly, this is a case of the apple falling pretty damn far from the tree.

Other players of note in the Atlantic League:

By RotoRob
This entry was posted on Monday, May 25th, 2009 at 5:18 pm and is filed under BASEBALL, Independent leagues, RotoRob. You can follow any responses to this entry through the RSS 2.0 feed. You can leave a response, or trackback from your own site.