Dear RotoRob: What Should I Do With My Fantasy Hockey Team? 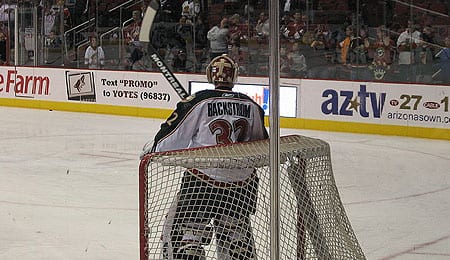 It may be time to turn your back on Niklas Backstrom.

I have eight wins and six losses in my 10-team Fantasy hockey league, putting me in fifth place. Categories include goals, assists, plus/minus, PPG, PPA, hits and blocked shots.

Can you please check out my team and tell me any moves you think I should try to make?

Here’s a link to my team.

I took a good deep look at your team and league and believe you have the framework for a very nice team. The first thing I noticed was that PIMs do not count in this league and that was a very pleasant surprise. I am probably one of the few that think this category does not have that much of a place in Fantasy leagues — much like +/- at times. But enough of that; let’s tackle your issue.

The question is what you can do to tweak your Fantasy hockey team. The good news is that there are no real major overhauls needed here. However, there are some cold realities that need to be addressed: for instance, Niklas Backstrom has been decent, but not spectacular this season for Minnesota. In a league like this, you seem to have wins pretty well covered with a guy like Jonathan Quick, but your highest save percentage is with Cristobal Huet at .911 and that is hurting you a little bit.

Jimmy Howard (yes, that Jimmy Howard) is very quietly putting up a sweet .923 save percentage and he is on the waiver wire. Now, I know he does not have Backstrom’s 18 wins and does not face quite as many shots, but that .016 difference is a pretty glaring one to pass up. You can always trade for a goalie that racks up wins later if that category become a bit of a problem again. But I think once Detroit gets healthy, Howard will start earning more wins.

I also saw that you only have one player (Dennis Seidenberg) who has 100+ hits and 100+ blocks. There are a couple ways to go here. You could pick up a guy like Andy Sutton (108 hits, 107 blocks); honestly, why trade too much for a guy proficient at these categories when you can go to the waiver wire?

To me, the other categories seem to be just a question of players getting hot at the right time. Trading now would not really solve anything as you currently seem to be kind of entrenched around the fourth or fifth spot. Now is the time for small tweaks and not major shakeups. Besides, something tells me that come February or March, Evgeni Malkin and Sidney Crosby will come around (even on the man advantage). Hang in there, Jason.

If you have any other questions, do not hesitate to ask. The best part of Fantasy hockey for me is comparing teams and stats with other Fantasy hockey owners. I hope this helps and good luck with your Fantasy league.

Chris will be live blogging the Canada-US Gold Medal game Tuesday at 8 p.m. EST at Fantasypros911.com. Drop in for some live chat while you watch what will be a true classic. The chat opens at 7:45 p.m.

By Chris Wassel
This entry was posted on Tuesday, January 5th, 2010 at 1:03 pm and is filed under Chris Wassel, Dear RotoRob, HOCKEY. You can follow any responses to this entry through the RSS 2.0 feed. You can leave a response, or trackback from your own site.