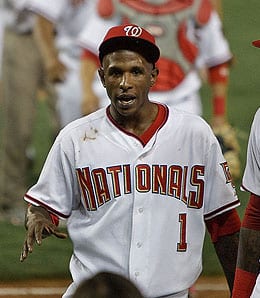 Sorry, but Nyjer Morgan is not the second coming of Billy Hamilton.

We’ve spent plenty of time recently examining potential 2010 sleepers. Now it’s time to turn the coin and look at some potential busts – players who you should either avoid or not invest too heavily in.

Many of you may be surprised to see 2009 waiver wire poster boy Nyjer Morgan fit into this category. Now, to be fair, we really don’t think Morgan will be a bust, however we believe that a caveat emptor is in order here – there are just too many warning signs to ignore.

Morgan deserves plenty of credit for helping to salvage another awful season by the Nationals. He was putting up a non-descript, pretty middling season for the Pirates when he was included in the late-June trade to Washington that sent Lastings Milledge to the Steel City. Morgan immediately provided a spark atop the Nat batting order, batting .351 with a superb .396 OBP while swiping 24 bases and compiling 35 runs in just 49 games for Washington.

A team that was floundering at 23-55 thanks in no small part to its atrocious defense was given a serious kick in the pants by this deal. Forget about what Morgan provided as the lead-off hitter; his excellent defense in centrefield helped the Nats turn it around and go 36-48 from that point on. That deserves kudos.

But before we go and spend a seventh round pick or higher on Morgan next spring, let’s take a closer look at his career and try to determine if this breakout was for real.

While his plus-plus speed is his main attribute, until he arrived in Washington, Morgan really wasn’t that good of a basestealer. In 2008, he swiped just nine bases in 14 tries for a success rate of 64 per cent. His 18-for-28 showing before the trade this year translates into the exact same rate – and that’s just not good enough. Top basestealers need to be successful at least two-thirds of the time or sooner or later even mismanaged ball clubs like the Pirates or Nats will start flashing the red light.

So his 24-for-31 success rate once he arrived in Washington seems high. We are talking about a 29-year-old minor league veteran who had played just 86 Major League games prior to 2009, so his track record is not exactly well established. Yes, Morgan was a fine base stealer in the minors, but I think expecting him to be successful more than, say, 70 per cent of the time in the majors is a mistake.

Next, let’s look at his inflated batting average and on-base percentage in the less than one-third of a season he spent in Washington, a stint, by the way, that ended in late-August when he broke his hand. In six seasons and 1,980 at bats in the minors, his lifetime BA was .294; his on-base percentage was .370. Obviously, banking on a .351 BA again is foolhardy; a more reasonable expectation is something in the .270s. As for on-base percentage, assuming the dramatic improvement in his strikeout rate in Washington sticks to an extent, Morgan is likely capable of putting up an OBP of around .350. Not bad; but not worth breaking the bank for.

Of course, we haven’t even mentioned his biggest weakness – hitting for power. Or how about the fact that he hit just .175 against lefties this season. Does that sound like a platoon player waiting to happen? Remember when Juan Pierre was a Fantasy stud? It’s not as long ago as you think.

The bottom line here is that Morgan will be a fine Fantasy asset in 2010, and probably swipe 50 bases with a decent BA. Batting atop a limited Washington lineup, I wouldn’t be counting on a crapload of runs, but he will be someone you want to target with a 10th round pick or later. Using anything higher to add Morgan to your team could be a recipe for disaster.

By RotoRob
This entry was posted on Saturday, December 19th, 2009 at 12:47 pm and is filed under BASEBALL, Busts, RotoRob. You can follow any responses to this entry through the RSS 2.0 feed. You can skip to the end and leave a response. Pinging is currently not allowed.