Ice Chips: Best of the Worst 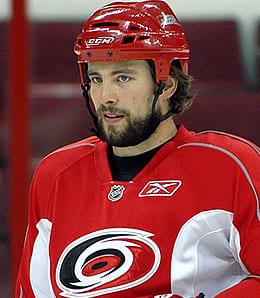 Despite Carolina’s struggles, Tuomo Ruutu is having a strong season.

The media might be focusing on the good stories this year, like the Los Angeles Kings and the Phoenix Coyotes. However, there are plenty of disappointing teams out there, but that doesn’t mean that there aren’t some Fantasy gems on those non-playoff squads. Let’s take a look at some of the best Fantasy players on some of the worst teams out there.

Carolina Hurricanes: Who would have thought that Carolina would turn in such a stinker of a season after going to the Eastern Conference finals last year? Injuries have played a big part in the Canes’ demise, but Tuomo Ruutu’s still putting together a pretty strong year with 10 goals and 12 assists so far. He’s also an even player, which is pretty incredible when you think about how spotty Carolina’s, um, everything has been. Eight of Ruutu’s points have been on the power play.

Tampa Bay Lightning: Much has been made of Steven Stamkos’ rise to prominence in his sophomore campaign, but that can overshadow the season that Ryan Malone has put together. Malone’s not just having a strong year, he’s on pace for a career year, and all of this is making a previously awful contract look pretty smart.

Toronto Maple Leafs: There’s no doubt that Phil Kessel is the key to the entire Maple Leaf team. However, here are a few guys to consider, too. Niklas Hagman’s already put up an impressive 15 goals while Alexei Ponikarovsky — the source of much heartburn over the years for Toronto fans — has a solid 25 points. On the blueline, Francois Beauchemin survived a terrible October (three points) to put in a pretty strong November/December; in fact, Beauchemin’s recovered to a point where he’s at .5 points per game.

Montreal Canadiens: There are two things pretty much everyone knows about Montreal. One, Scott Gomez is an unmitigated disaster, and two, Tomas Plekanec is flying high on a career year. Lost in that might be the resurgence of Marc-Andre Bergeron, who was initially signed as a stop-gap for the Andrei Markov injury. (Markov, by the way, is coming back early, and is scheduled to play Saturday night.) All Bergeron has done is put up a red-hot December and maintain better than .5 points per game.

St. Louis Blues: Yup, the Blues can’t score. In fact, you know things aren’t good when young defenseman Erik Johnson leads the team in scoring, despite name players such as Paul Kariya, Brad Boyes and Keith Tkachuk. How are the Blues still in the playoff hunt? A big part of it is goaltending, and the duo of Chris Mason and Ty Conklin has remarkably similar stats. In fact, those two Blue goalies average a 2.40 GAA and a .925 save percentage, making either one a reasonable pickup for goaltending depth.

Edmonton Oilers: While Nikolai Khabibulin might be recovering from injuries, Jeff Deslauriers isn’t doing too bad for himself. In fact, Deslauriers put together a pretty good run, going 8-5-2 after an up-and-down start.

Minnesota Wild: After an awful start, Todd Richards has got his team steadying the ship, just in time for hopes of a playoff push after the New Year. While Martin Havlat has been an absolute disaster, Andrew Brunette keeps chugging along with a strong 28 points in 33 games.

Injury updates: Can Detroit stay injury free in any way possible? The latest casualty is Henrik Zetterberg, who sustained a shoulder injury after a clean check from Tampa’s Mattias Ohlund. Up in Ottawa, Jason Spezza will be lost for a long time. This might actually help Fantasy owners who’ve been wasting games hoping for Spezza to return to form. David Booth has finally returned to non-contact skating with his teammates. With Stephen Weiss and Nathan Horton heating up, Booth might be carried by strong team momentum when he finally returns.

Line change updates: Wade Redden’s riding the pine in New York, which is all well and good, but you should have dropped or benched Redden dropped a while ago now. The Bruins will try putting Michael Ryder with Marc Savard and Marco Sturm, and Jesse Winchester will try to fill Spezza’s skates by starting between Daniel Alfredsson and Milan Michalek. If you’re looking tor goaltending help, keep an eye on where Jaroslav Halak may wind up, as word is that Montreal is shopping him.

By Mike Chen
This entry was posted on Friday, December 18th, 2009 at 7:48 pm and is filed under HOCKEY, Ice Chips, Mike Chen. You can follow any responses to this entry through the RSS 2.0 feed. You can leave a response, or trackback from your own site.