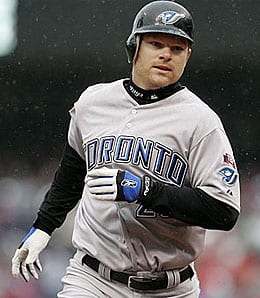 After his monster 2009, Adam Lind is a clear keeper regardless of your format.

I’m in a 14-team, H2H 6×6 (OPS and holds) keeper league. The keepers can only be kept three years after being drafted and each team is allotted five keepers. I would estimate that I have seven legitimate keepers. This is the fifth year of the league, which means all the big stars go back into the draft (Albert Pujols, Hanley Ramirez, Chase Utley, Alex Rodriguez, etc.).

I am picking seventh. It would appear one of these three will be available when I pick: Miguel Cabrera, Ryan Howard or Mark Teixeira. Here’s my roster with years left in parentheses.

As it stands, I’m torn about keeping Reynolds over Sandoval/Longoria/Lind and Zobrist (just love his OBP and 2B eligibility). I’m nearly certain to keep Lincecum even though most experts say don’t keep the SPs. If I bypass one of the three first basemen who fall to me, I’d be reaching for a Matt Holliday/Grady Sizemore at No. 7. Any advice would be appreciated.

Okay, let’s see if we can make some sense out of your conundrum. I think the easiest way to tackle this one is through the process of elimination with the sheer number of players we have to evaluate.

My first thought is let’s get the no brainers out of the way and there are two names that leap out at me. You have to keep both Lincecum and Longoria. The best SP in the game and Longoria form a great core to work from. Two down, three to go!

I think we can eliminate the following players from the list, not because they aren’t worthy, but simply because of the depth of talent you’ve manage to assemble on your roster. Kubel, Hamilton and Gallardo must, unfortunately, hit the streets or could be part of a package in a trade to upgrade your keepers.

Keeper No. 3 would be Lind. This kid is a monster with the bat and gives you great numbers across the board at a position other than at the corner, your key area of excess.

This leaves two keeper slots for Reynolds, Zobrist, Sandoval, Werth and Upton. As you mentioned, you are currently looking at picking in the No. 7 slot in your draft for 2010. This should net you a power bat at first or an OF and I really like Sizemore to bounce back. Great options, but I’d be looking, as you are, at those options in conjunction with your final two keepers.

As much as the extreme strikeouts and potentially poor BA scares me, I think Reynolds has to be kept. The numbers he posted in both power and speed in 2009 are very real. Heading into 2010, one area that should be of concern to all is the veritable wasteland at third base. After the top-tier guys go off the board it gets a tad thin at this position and shortening the available pool at the hot corner is, I believe, very advantageous from your perspective.

And now for that last and final pick. I like your train of thought as far as trading to upgrade. The pool at second base this year is deeper then we’ve seen in years so Zobrist goes back. Upton is a great player and one that should be on the rise, but you’d only have one year left and is 2010 going to be the year? I like Sandoval, but there are a slew of first base types that are better producers that will be available. Werth had a great year in 2009, but was that an outlier or what we can expect to be the norm moving forward? Personally, I’m thinking it was a career year, so I expect regression in 2010. By packaging these guys in conjunction with Kubel, Hamilton and Gallardo you should be able to upgrade that fifth keeper.

You mentioned three players that you are targeting in Kemp, Tulowitzki and Mauer. All are great players and in early mocks all three have gone in the first two rounds. I have ranked them in my order of preference but all three are very close. Kemp has the potential to be a 30-30 guy, 100+ RBI, and hit for a good, if not great average. What’s not to like there? And he would address a soft spot on your roster — stolen bases. You have the players at your disposal to make that deal so I’d pursue that option and move quickly if you can.

You mentioned that you had some issues about overpaying in a trade, but I wouldn’t be overly concerned. The guys that you are trading are surplus and not a part of your plans moving forward so sometimes giving up a bit more to secure what you really want is a good plan of attack.

If you can manage to make a deal, that player then becomes your fifth keeper and I’d focus on a power bat at first base with your first draft choice in 2010. I have found that stolen bases are rather plentiful looking down the road, and with Reynolds and say, Kemp, on your roster you should be able to procure what you need in the middle rounds of your draft.

Let us know how the wheeling and dealing works out for you.

By Tim McLeod
This entry was posted on Saturday, December 12th, 2009 at 12:56 pm and is filed under BASEBALL, Dear RotoRob, Tim McLeod. You can follow any responses to this entry through the RSS 2.0 feed. You can skip to the end and leave a response. Pinging is currently not allowed.