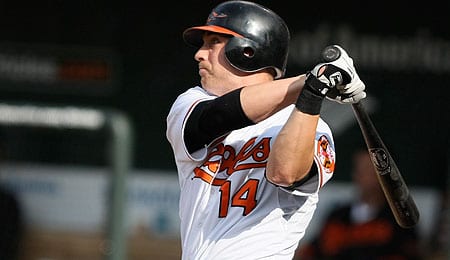 Whether he’s playing OF or 1B in 2010, Nolan Reimold could be mashing.

When we last checked in on Oriole rookie outfielder Nolan Reimold, he had the dubious distinction of being our Daily Dump — not exactly the kind of recognition one tends to seek.

That pan proved astute, as once Reimold slowed down at the end of June, he went into a tailspin for July (746 OPS) and August (719) before getting hot in September (1006) just before having to endure season-ending surgery to repair his frayed Achilles’ tendon.

But there are several reasons why we’re touting this 26-year-old as a serious sleeper for 2010. I mean, despite Reimold’s struggles through the summer, he wound up beating out more entrenched and more hyped Fantasy assets like Brian Roberts, Nick Markakis and Adam Jones for the Oriole OPS crown. Pretty darned impressive for a rookie.

And then there’s the fact that this right-handed hitter wound up recording a higher OPS (840) against righties than he did against lefties (815). This is one youngster who you don’t need to worry about being platooned by his team.

Reimold is one of the first of the current Oriole wave of home-grown talents to arrive in the Show, and he’ll soon be followed by several others – especially on the pitching front – as the B-More organization looks to turn things around.

Yes, there’s talk that Reimold could be shifted to first base to fill the team’s vacancy there while also helping to clear the outfield logjam, but even if that happens, he’ll still qualify at OF for 2010, and a little multi-positional eligibility never hurt anyone. Besides, playing first will likely help Reimold stay healthy.

A far more likely scenario will see the Orioles deal away Felix Pie to create more PT for the rest of their flyhawks, but however this plays out, it’s clear Reimold will get his at bats. Now before you let him slip too far in the draft, just imagine what he’s capable of doing in his first full big league season.

By RotoRob
This entry was posted on Friday, December 11th, 2009 at 11:11 am and is filed under BASEBALL, RotoRob, Sleepers. You can follow any responses to this entry through the RSS 2.0 feed. You can skip to the end and leave a response. Pinging is currently not allowed.