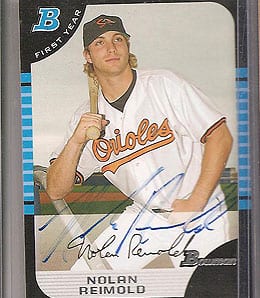 Nolan Reimold has slumped recently, but overall is showing some serious pop.

The Orioles will likely be very happy to get home Friday after getting swept by the Marlins, thereby losing the little ground they had made up on Tampa Bay. Visiting B-More this weekend is Washington, a team that’s been holding its own lately, but struggles badly to win on the road. The return home is good news for rookie left fielder Nolan Reimold, as he had to sit a couple of games in NL parks this week to accommodate normal DH Luke Scott.

Reimold has been very impressive so far, living up to our recommendation last month to pluck him off the wire. He smacked five dingers in just 60 at bats in May, and has continued to hit for power this month. However, Reimold is stuck in a 2-for-13 skid, causing him to wind up on a few waiver wires this week. It’s hard to recommend the former Future Game participant right now, so I’d suggest seeing how he fares over the next couple of weeks as he gets back into consistent PT.

Before all is said and done, Reimold could factor into the AL ROY race, and if nothing else, he’s part of an exciting wave of young talent that’s beginning to swarm Charm City – and it’s been a hell of a long time since we’ve been able to say that.

By RotoRob
This entry was posted on Friday, June 26th, 2009 at 2:23 pm and is filed under BASEBALL, Daily Dump, RotoRob. You can follow any responses to this entry through the RSS 2.0 feed. You can leave a response, or trackback from your own site.