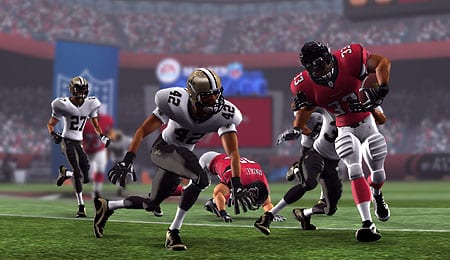 Coming off the phenomenal Madden NFL 10, EA Tiburon decided to put its NFL license to different use and unleash Madden NFL Arcade on the Xbox Live Arcade and Playstation Network. It strips away most of the intricacies of real football, instead opting for short, fast-paced games that are accessible to players of all ability levels. While those expecting an updated version of EA’s now defunct NFL Street series may be disappointed, Madden NFL Arcade offers some enjoyment of its own.

If you’re familiar at all with the Madden franchise you’ll immediately feel at home with the “standard” control setting. Even someone like me, who is brand new to the PS3 and had logged a ton of hours on the Xbox 360 versions, had no trouble making the transition. This is definitely the preferred setting as it gives you access to all the usual moves and maps them to the traditional locales.

The game also comes with an “arcade” setting, which attempts to simplify the controls by omitting some less essential functions — such as pump faking, hurdling and diving — and remapping others. It felt counterintuitive to me, but then again I’m a grizzled veteran of the series and not the casual gamer they were aiming for with the streamlined setup. Madden NFL Arcade even displays hints for what buttons to press during gameplay, although that can be turned off from the options menu.

As far as executing the moves I felt there was a slight delay between when I jabbed the right stick for a juke and when it took place. For better or worse that split second seems to make it more about anticipating than reacting, so for me it took a little while to get the timing down. Also of minor annoyance is that the game’s default controller setting is “arcade,” meaning you’ll need to change it before playing each time you load up the game since it won’t save your preference.

Visually, the player models in Madden NFL Arcade are ripped from the Wii version of Madden NFL 10 and may have some detractors because of their cartoony nature. Given that this is an arcade title and EA was clearly attempting to differentiate it from the retail game I don’t have a problem with it at all. In fact, it reminds of Nintendo’s classic 8-bit effort Ice Hockey, where the teams were made up of fat guy, skinny guy and medium-sized guy.

Beyond the disproportionate body parts with hulking linemen and incredibly lanky receivers, the graphics are vibrant. The uniforms look good, as do the stadiums and firework celebrations. Player animations are generally smooth and realistic, though it seems like the ability to tackle effectively has been decreased. However, to me that amount of realism is actually a bit disappointing as the over-the-top moments are few and far between (sorry NFL Blitz fans, no post-whistle leg drops).

Minimalism is the word of the day when it comes to the audio presentation. The grunts and cheers during the games are solid, though there’s nary a word of trash talking going on. A couple songs pop up here and there to go along with some sound effects associated with the game changers, but ultimately things stay pretty hushed.

Electronic Arts shoots for a simple, pick-up-and-play experience with Madden NFL Arcade, and there’s no denying it hits the mark. The game has cut the field length to 60 yards, eliminated first downs and kickers (you have four downs to score), reduced the number of players on the field from 22 to 10 and made it so the first team to reach 30 points wins. In addition, each snap presents only four play types to choose from (run, short/medium/long pass on offense and blitz, short/medium/long coverage on defense) and there are no pre-snap adjustments outside of flipping the play. This level of simplicity can be both good and bad. On the upside, it helps to level the playing field for gamers of nearly every skill level, but on the downside what’s left makes for a very similar experience from one game to the next.

The trimmed down playbook is a big reason for the ongoing sense of déjà vu. On defense you’re only given four plays, and they’re all quite similar. The down lineman always rushes and the safety always plays zone. Your corners play man-to-man except on the “deep cover” call. That leaves your linebacker as the only guy really mixing it up as he can rush the passer, play shallow/medium zone or man-to-man with the back. Unfortunately, if you’re not controlling that linebacker expect him to lose the running back on flat routes all day long.

On offense there’s not much variety either, with your playbook consisting of a dozen or so plays chosen at random after making your choice of short/medium/deep throws (there’s just one running play). There are no trick plays whatsoever, and you’ll likely find yourself dumping off to the back a lot since the safety is always over the top making it 3-on-2 against your receivers at all times. Your wideouts will also regularly sit down in their routes around 10-20 yards downfield, which can be a problem when you’ve only got four plays to score. It would’ve been nice to see a little more variety in play calls as well as with receivers continuing to look for open space when the quarterback scrambles.

While the basic plays of Madden NFL Arcade are limited, the addition of game changers does a good job of capturing the arcade feel and bringing a level of strategy to things. There are a dozen in all, though some will come up much more often than others. Several of them are effective (Frostbite, It’s Alive, Fumbilitis) while others are kind of useless (Triple Threat, Flying Blind). The one that everyone talks about, though, is “Flip Flop,” which allows you to switch scores with your opponent. I recognize the appeal of making it so no one is ever truly out of a game, but I also understand a lot of the venom I’ve seen in forums about it as it essentially punishes you for winning. I’ve only encountered it twice in 30-plus games so it doesn’t seem to come up very often.

The game action is fun despite the simplicity, though it suffers from a dearth of options, allowing you to play a single game versus the computer, local multiplayer or online. That’s it. There’s no progressive season mode or even a challenge ladder. Although the PS3 online community doesn’t appear huge for this game (I only once saw a person in a lobby) I never had trouble finding a quick match. Things usually ran smoothly with no detectable lag; however a couple contests against players with sub par Internet connections resulted in brief hiccups in the gameplay. Things never jumped around the screen, but it would stop for a moment before resuming.

Those that play online will notice an inordinate number of people playing as the Titans or Eagles. This is because Vince Young and Donovan McNabb are excellent scramblers, and if you choose to go through with the match odds are you’ll be seeing a ton of your opponent running with the QB. It’s a cheap exploit, and I’d recommend backing out of games if your would-be opponent selects one of those two clubs. Assuming you can find a legitimate game, things are pretty fun, and there is almost always an ebb and flow to keep things exciting. Offline multiplayer is also enjoyable, allowing for one-on-one or two-on-two matches with you and your friends. Unfortunately, the option to team up is not available online.

There’s no doubt Madden NFL Arcade still has some kinks to iron out, most notably expanding the single player options, but it’s a fun game to play that doesn’t require a lengthy time commitment. Those that enjoy playing with friends and/or online should get enough out of this to justify the $15 (1,200 MS points) it’ll set you back.