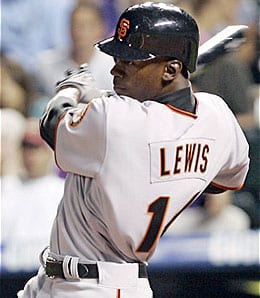 Too many Fred Lewis types doomed the Giants in 2009.

We’re back with more of our look at the 2009 San Francisco Giants. You find our previous segments here: Part I and Part II.

In our previous parts, we focused on the pathetic nature of the Giants’ offense, and yet another reason for the weak attack was outfielder Fred Lewis, who all played his way out of being an everyday player. Lewis enjoyed a fine 2008 campaign – his first as a full-time big leaguer. But after a strong April, things went downhill quickly for Lewis, and by July, Nate Schierholtz more or less took his PT away.

Overall, Lewis was incredibly unproductive this season, and what modest pop he flashed last year disappeared. The big problem was he simply couldn’t hit lefties (.164 BA), so he was better down the stretch (786 OPS after the break) as a part-time player when he was not exposed to southpaws. And he put up that decent second half despite an absolutely crap September. The Giants are expected to try to lure a free agent outfielder this winter, and that could leave Lewis out in the cold. He may still bounce back, but so far, he’s been a big disappointment.

Speaking of disappointments, if you’re a Giants’ fan, it’s hard not to be upset at the relative lack of return the team has received from the ridiculously ill-conceived seven-year, $126-million contract that they gave Barry Zito in December 2006 – at the time, the largest deal ever doled out to a pitcher. Obviously, given that he’s the team’s highest paid player on a mid-market team, it’s reasonable to expect some pretty amazing results, the type of which have yet to transpire. However, let’s be fair here: after bottoming out in 2008, Zito actually did make a lot of progress this season.

On July 12, he suffered his worst bitchslapping of the season, and in fact, the worst since he’s arrived in San Francisco – eliciting plenty of well-deserved boos as he departed after surrendering 10 hits and nine earned runs in just 4 1/3 IP. It was just the third time in Zito’s career he had given up nine runs or more in a game.

The thing is, from that moment on, Zito was a different pitcher. Check out his game log for the final 15 starts of the season to see what I mean. He managed to trim his ERA by almost a full run over this stretch – the most consistent run he’s had as a Giant yet. Could he be ready to return to ace status, or at least be a top-of-the-rotation type in 2010? A revitalized Zito would give the already busting-at-the-seams-with-talent Giant rotation yet another weapon.

If this team’s hitting improves by even 20 or 30 points of OPS – look out. They’ll be almost assured of reaching the postseason for the first time since 2003.

In previous parts, we’ve already mentioned how this team’s offense would have been completely lost without Pablo Sandoval, but it’s worth discussing his 2009 a bit more, especially considering he was pretty much the only must-own hitter on the team, from a Fantasy perspective. The 25 dingers were impressive, but when you combine that with the NL’s second-highest batting average, sixth-best slugging percentage and seventh-highest OPS, you’ve got yourself a monster. Just 23, Sandoval has plenty of upside – which is a scary thought for opposing NL pitchers.

On the flipside, the progress that Kevin Frandsen showed back in 2007 has completely gone by the wayside. Sure, he lost virtually the entire 2008 season to injury, but it’s hard to believe that as recently as Spring Training 2009, he was still very much in competition for a starting job. Not only did Frandsen not win the job, but he didn’t even make the team out of Spring Training. Well, at least he stayed healthy, because there’s not much else you can say about his 2009.

In multiple stints with the Giants, Frandsen couldn’t hit his way out of a paper bag, batting .140 with a 384 OPS for 50 at bats. And down at Triple-A, it wasn’t as if he was crushing the ball. He was somewhat productive in the minors, but he only hit .295 – not bad by any means, but the first time he’s been under .307 in any Triple-A stint (keep in mind that we’re talking about a player who has a career BA in the minors of almost .320). Again, the 790 OPS was decent, but didn’t exactly scream “bring me up, I’m ready to bitch slap major league pitchers.” Frandsen is still just 27 and he’s headed to Puerto Rico this winter to improve his game, so he still may settle in as a utility infield type, but I suspect his days of being an intriguing Fantasy option have disappeared ever since his injury.

Clearly, the offense needs addressing this offseason. But with that overabundance of pitching, there are plenty of trade chips here for the team to lure a big stick from someone. Jonathan Sanchez, for instance, with three more years to go before he can become a free agent, would be an ideal part of a package to help land a masher. Currently penciled in as the No. 4 starter in the rotation, Sanchez could be a lot more valuable to a pitching-weak club. How about trying to pry Shin-Soo Choo away from the Indians using Sanchez as the bait? What about Josh Willingham from Washington? He’s a player rumoured to be on the market. Surely, Sanchez could bring in a hitter who can make a difference in this lineup, either in a one-for-one deal, of if San Francisco is feeling very ambitious, as part of a package for a really big fish.

But it’s probably going to take more than adding a big hitter to turn the Giants into an offensive force, or even a middling attack – which would be a massive improvement. This team needs to count on some organic growth from some of their young hitters, a few of which are on the cusp this season as far as finding out if they’re legitimate major leaguers or Quad-A types.

One of those is first baseman Travis Ishikawa. He’s 26 and coming off his first full-time season in the bigs, but we’re not seeing the offensive development we had hoped for. He got hot in mid-summer, earning a Wire Troll recommendation in early July, and that proved to be a good call as Ishikawa continued to hit well in July, batting .300. Unfortunately, he slumped in August before bouncing back somewhat in September. Still, it was a disappointing year for this defensively lauded fielder, as his extra-base pop was unacceptable for a corner infielder. Ishikawa’s walk rate dipped as well, but while his lefty-righty platoon splits weren’t bad, perhaps the Giants should have been employing a home-road platoon on this dude. He hit .349 with a 935 OPS at AT&T Park, but the Mr. Hyde act on the road was shocking as he managed just a .162 BA and 471 OPS away from home.

More telling, Ishikawa’s 659 OPS after the break suggests to me that his job shouldn’t be guaranteed in 2010 by any stretch of the imagination. New hitting coach Hensley Meulens has already started working with Ishikawa, among others, as he looks to help some of these bubble big leaguers achieve their potential. A big step forward from Ishikawa in 2010 would be a huge bonus for the Giants.

By RotoRob
This entry was posted on Wednesday, November 18th, 2009 at 12:16 pm and is filed under BASEBALL, RotoRob, Team report. You can follow any responses to this entry through the RSS 2.0 feed. You can skip to the end and leave a response. Pinging is currently not allowed.