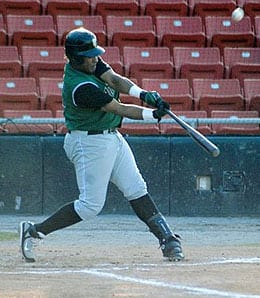 Will Angel Villalona be wearing orange for the San Francisco Giants or the federal penitentiary system?

Since we published Part I of our San Francisco Giants season review, a couple of their players have been in the headlines for the wrong reasons.

Angel Villalona, considered one of the team’s top prospects and the first baseman of the future, is the prime suspect in a shooting death in the Dominican Republic, but earlier this week the victim’s family – who received a cash settlement from Villalona – has asked the a judge to drop the case. Amazing what a throwing few dollars around will do to a murder charge. However, the prosecutor still plans to pursue the charges against Villanlona, so he hasn’t exactly bought himself a free pass quite yet.

Giant ace Tim Lincecum, meanwhile, was nabbed while speeding and carrying 3.3 grams of pot. He’s going to get off with a slap on the wrist, and it’s not as if this is some kind of performance-enhancing drug that would improve his play on the field. Sure, Doritos and Twinkies sales are up all around San Francisco, but this is hardly something that will require an asterisk beside his Cy Young award.

Speaking of Giant hurlers, we need to talk about Randy Johnson’s 2009 campaign, which very well could be the final season of his tremendous career. He became the 24th pitcher to reach 300 wins, but then wound up missing over two months with a shoulder injury. When the Big Unit returned, he pitched out of the bullpen and wasn’t very effective. You know he’s going to want to start again should he decide to return for another season, and it’s hard to imagine the Giants having room for him.

Johnson will take some time over the winter to mull his options, but after compiling a 303-166 record for six teams and racking up a ridiculous 4,875 strikeouts – second only to the great Nolan Ryan and the most ever by a lefty – it’s probably time for him to call it a day. After five Cy Young awards, you’ve got to figure Johnson is a slam dunk first ballot Hall of Famer. So go home, Randy and sit by the phone until Cooperstown comes calling.

While the Unit’s 300th win was a definite highlight in San Francisco, how about the no-hitter Jonathan Sanchez tossed on July 10? Better yet, how about the progress the young lefty made in his second full season as part of the Giant rotation? His K/9 bounced back, he was much harder to hit and Sanchez became a different pitcher after the no-no, making huge strides in the second half. If there were any questions whether he’s a fixture in the rotation, they have been answered by Sanchez’s post-break performance.

In the bullpen, Brian Wilson solidified his role as closer, nailing down 38-of-45 chances and doing so in much less shaky fashion than he did in his first season as the closer. He’s quickly morphing into one of the more dominant firemen in the game, so feel free to draft him with great confidence next spring.

Now, as we discussed in Part I, the Giant offense was quite pathetic, but imagine how bad it would have been without Pablo Sandoval, the team’s hefty third baseman. In his first full season, this switch hitter hit .330, smacked a crapload of tape-measure home runs and drove in 90 runs.

In the outfield, Nate Schierholtz got super hot in June and early July, prompting a Wire Troll recommendation, but we missed the boat on this one as he struggled down the stretch, hitting a mere .240 after the break. This 25-year-old finally stuck as a big leaguer this season, but given his struggles against righties, all he managed to prove was that he could be a decent power bat off the bench against lefties. The fact is that this kid has serious power potential, but you wouldn’t have known it this year as he managed a mere five dingers.

The weak side of a RF platoon? That doesn’t sound very Fantasy-worthy to me, but with Randy Winn on his way out of town, Schierholtz will be given a chance to win more PT in right, but he’ll need to fend off Andres Torres, Fred Lewis, John Bowker and perhaps even Eugenio Velez. He has upside potential, but I don’t like Schierholtz’s chances of holding Fantasy value in any standard sized leagues, even NL-only ones, unless he starts hitting righties better.

Speaking of Velez, perhaps he and Schierholtz make perfect platoon partners as Velez struggles against lefties. He has tremendous potential as a top-of-the-order hitter, but he’ll need to work on his patience and his baserunning. New hitting coach Hensley Meulens should make this a priority – turning Velez into a Major League quality hitter.

Catcher Bengie Molina – in his walk year just in time for the arrival of Buster Posey — slipped a bit after an excellent 2008, and he’s almost assuredly gone as the Giants aren’t expected to try to re-sign him. And why would they? Block the best catching prospect in the game? Uh, maybe not. Molina flashed more power last year, smacking 25 doubles, a triple (how the hell did that happen?) and a career-best 20 homers, but he wasn’t as productive as he was the season before. The fact that he had his worst OBP since 2002 didn’t help matters. The Mets may make a play for Molina, but it’s worth noting that the sluggish catcher hit much better at home (.309 BA, 856 OPS) than he did on the road (.225 BA, 610 OPS). This is definitely some food for thought for those of you in keeper leagues or for Fantasy owners trying to get an early fix on what Molina might be worth in 2010.

This was definitely a season of progress for the Giants, one that earned manager Bruce Bochy and general manager Brian Sabean well deserved contract extensions. Bochy’s fate might be tied to how well Meulens does as far as developing a more patient approach for the Giant hitters; as for Sabean, he’ll be judged by his ability to land an impact bat either through free agency or trade this winter.

We’ll take a look at a few more of the Giant hitters and discuss early hot stove activity in Part III, coming soon.

By RotoRob
Tags: San Francisco Giants
This entry was posted on Thursday, November 12th, 2009 at 11:16 am and is filed under BASEBALL, RotoRob, Team report. You can follow any responses to this entry through the RSS 2.0 feed. Both comments and pings are currently closed.