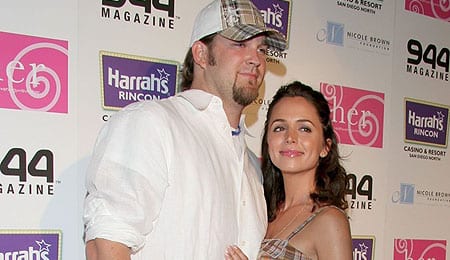 The Brad Penny signing turned out pretty well for the Giants — and the ladies were definitely appreciative of his efforts.

Despite again being saddled with one of the worst offenses in the majors, the San Francisco Giants were able to make great progress in 2009, improving their record by 16 wins and remaining in the playoff hunt until the season’s final week.

For the Giants, it was all about pitching, as a staff led by Tim Lincecum and Matt Cain ranked second in the National League in ERA, BAA, OPS against and WHIP. Hell, even Brad Penny, cut from the Red Sox and signed to a minor league deal by the Giants at the end of August, was brilliant down the stretch – going 4-1, 2.59 in six starts with San Francisco.

That the staff was as good as it was without any contributions from Noah Lowry, a 14-game winner in 2007, but out the past two seasons with injuries, speaks volumes about how good a job they’ve done scouting and drafting pitchers. Lowry is probably done as a Giant, as he’s been removed from the roster and will become a free agent as he tries to revitalize his career elsewhere. Frankly, with all the great young arms already there and the others on the way, they don’t need him.

The offense, on the other hand, was again rather wet noodle-esque, ranking dead last in the NL in OBP and OPS and hitting the second-fewest home runs in the majors. It cost hitting coach Carney Lansford his job and now the task falls to Hensley Meulens, promoted from being the hitting coach at Triple-A, to teach the Giants to take a more patient approach at the plate.

Let’s harp on the poor offense first. Perhaps the easiest to single out as underperforming based on his salary is centrefielder Aaron Rowand, who has regressed each season since he arrived in San Francisco after being signed to what now looks like a disastrous contract. Rowand’s power actually bounced back a tad this year, but come on – it’s pathetic.

His walk rate was down and his strikeout rate was up, and that’s a deadly combo. This right-handed stick had an OPS of just 636 against lefties! WTF? While Rowand looked like a solid waiver wire pickup in late-May — and Tim, as usual, was bang on with that one as Rowand hit .320 and had his best month of the season in June – he really faltered down the stretch with an OPS of 629 in the second half. As the season progressed, his power really waned and by season’s end Rowand wasn’t even a must-own player in NL-only leagues.

There’s talk that he may be headed to the Cubs in exchange for Milton Bradley – who would bring with him to San Francisco a whole different kind of headache, so we’ll see how that plays out. I’m sure the Giants would love to rid themselves of the albatross of a contract that they unwisely gave to Rowand.

Utility infielder Juan Uribe enjoyed a fine bounceback campaign, and was quite productive for the Giants, but he’s a free agent and wants a multi-year deal, so San Francisco would be wise to let him walk. The last thing the Giants can afford to do would be to make another mistake in free agency a la Rowand in 2008 and Edgar Renteria in 2009.

Last year, the Giants threw around a lot of money early in the free agency game, and not all of it was spent wisely. The Renteria signing, in particular, has been a major bust so far. For starters, he’s had a tough time staying healthy in recent seasons, and this year his elbow was a problem for a good chunk of the season, finally necessitating season-ending surgery in September. But this was the worst season of Renteria’s career anyway you look at it. He scored less runs and had less hits than ever before; his power is completely gone; he hit a career worst .250 and struggled through a 635 OPS. Renteria is another right-handed bat that was vulnerable against lefties (629 OPS), and he was brutal after the break (621 OPS), especially in September, when he hit just .116 and had an OPS of 365. Obviously the elbow was a factor, but this dude was signed to help beef up the San Francisco offense – not bring it down. We weren’t overly bullish on Renteria’s prospects for 2009, listing him No. 16 among shortstops in our pre-season rankings, but by season’s end, Renteria wasn’t even a top 30 shortstop, which means that he was only worth owning in deep NL-only leagues. Yikes.

The Giants also tried to beef up the offense at the deadline, acquiring Freddy Sanchez, who was having a fine year for the Pirates. Unfortunately, Sanchez struggled with health issues, and was only able to play 25 games for the Giants over the final two months and change. Regardless, the team recently gave him a two-year extension, so he will get another chance to show what he can do at the keystone corner next season.

Another culprit was Randy Winn, long a dependable hitter, but one who definitely started showing his age in 2009. He had his lowest run total since 2001 and had 10 less extra-base hits than he did in 2008. Overall, this was Winn’s worst season since 2000. The reason? The veteran switch-hitter clearly can no longer hit lefties anymore – his OPS as a right-handed hitter was 384. Uh, ya. Can you say platoon player, please? Anyways, Winn’s a free agent, so it might not be the Giants’ problem anymore. But Winn is yet another Giant who slumped in the second half, with his OPS dropping 100 points after the break. Heading into the season, we had him pegged as a top 70 outfielder, but he was barely a top 90 flyhawk in 2009, which meant that Winn was only useful in NL-only leagues, and even then, probably as a bench player.

I can see it’s going to take more than one part to dissect this team, so we’ll continue this later in the week.

By RotoRob
This entry was posted on Thursday, November 5th, 2009 at 9:59 pm and is filed under BASEBALL, RotoRob, Team report. You can follow any responses to this entry through the RSS 2.0 feed. You can skip to the end and leave a response. Pinging is currently not allowed.