The Wire Troll: A Lastings Impression 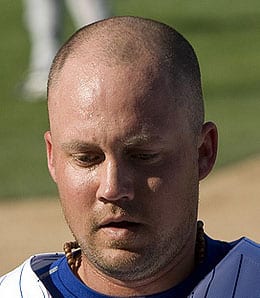 Another road trip comes to an end and now it’s time to play catch up. During my break, the Giants found their offense in a big way. The Rangers are still tied for first with the injury-riddled Angels. The Mets continue to struggle, buried under a slew of injured and underperforming players, and the Nationals are, well, still the Nationals. The Blue Jays have finally came back down to earth with a thud and, in what is probably the tightest division in baseball, the logjam in the NL Central sees even the Pirates only six games back at the beginning of July. It truly is a great game.

My thanks to RotoRob for carrying the torch last week while I was gallivanting through the American Midwest and, without further ado, let’s take a look at some potential wire acquisitions for the upcoming week.

Casey McGehee, 2B/3B, Milwaukee Brewers: After a rather slow and inauspicious start, McGehee has been on fire as of late. Over the past 10 games he has four homers, 13 RBI and a solid .289 BA. He’s pushed uber-prospect Mat Gamel to the bench and, with interleague play now completed, probably back to Triple-A. McGehee is currently hitting in the fifth slot behind Prince Fielder and Ryan Braun, meaning plenty of RBI opportunities and making him is a solid acquisition in all formats.

Aroldis Chapman, SP, F/A: Yes, I’m rather bullish on the young Cuban, but with his history and relative youth why shouldn’t I be? Those Fantasy players in dynasty keeper leagues should be rushing to the waiver wire to get this kid rostered before the mad dash to acquire his services commences.

Everth Cabrera, SS, San Diego Padres: The 22-year-old Cabrera, a Rule Five pick from the Rockies, is an intriguing option. He has only 27 at bats above the Single-A level, but what a season he had at Lake Elsinore in the California League. This kid has some serious speed, with 73 stolen bases in 89 attempts in 2008, and even flashed some power (six homers and 38 RBI). If filling a hole in your Fantasy squads’ middle infield is a priority and you feel the need for speed, Cabrera is a decent gamble.

Martin Prado,1B/3B/2B, Atlanta Braves: Okay, he’s no Kelly Johnson, but is that really such a bad thing? Until Johnson finds a way to get healthy and crawl past the Mendoza line, Prado has the gig at second base for the Braves. He is currently the hot hand in a rather anemic offense with one homer, six RBI, and a .500 BA over his past five games. The position flexibility also helps make him a very nice option in deeper mixed leagues and NL-only formats.

Lastings Milledge, OF, Pittsburgh Pirates: The Pirates didn’t trade for Milledge to not give him a shot. He’s currently on the DL rehabbing the effects of a broken finger, but a return to active status is rumoured to be imminent. The 24-year-old outfielder hit 14 homers with 61 RBI and 24 thefts in 2008 in a lead-off role with the Nationals before falling into Manny Acta’s doghouse to start the 2009 campaign. The Nats do have a plan, they’re just keeping it a secret from everyone, including themselves. How do you just give up on a kid with this much potential? Enough Tim, we don’t need another rant on Acta even though he is such an easy target. If Milledge is available in your league get him rostered and stashed away on your bench in the hopes he can continue to build on that solid 2008 for his new club in the Steel City.

Chris Woodward, 3B, Seattle Mariners: If you are currently in desperate-times-require-desperate-measures mode, the injury to Adrian Beltre opens a window of opportunity for Woodward. He’s off to a rather hot start since replacing Beltre, but his career numbers speak loudly of utility/role player at best. There appears to be no relief forthcoming from the Mariner farm system so it looks like the job is his making him worthy of a pickup in AL-only leagues.

Kevin Correia, SP, San Diego Padres: The former Giant is quietly enjoying a solid season for the Padres. He’s been remarkedly consistent other than that last start against the Astros and is heading into a two-start week. On the year he has a 4.58 ERA, 1.28 WHIP and 73 strikeouts in 92 1/3 IP. He’s currently owned by only 44 per cent of the teams playing over at CBS. Correia makes for a solid addition heading into the break in both NL-only and H2H leagues.

Ryan Sadowski, SP, San Francisco Giants: The 26-year-old didn’t have stellar numbers at Triple-A Fresno this year, but nonetheless has turned in two great starts for the surging Giants since being recalled June 28. Two starts, two wins, and 13 scoreless innings later it looks like it might be time to give the kid some props. It’s time to make a move on Sadowski in all dynasty, H2H, and NL-only formats and keep him on the radar in mixed 12-team leagues. One more solid start out of the righty and he will very quickly turn into a hot commodity in all formats.

Nate Schierholtz, OF, San Francisco Giants: In his past 10 games, 25-year-old Schierholtz is batting .421 with two homers, six RBI and 11 runs scored. He provides a very solid mix of moderate power and speed potential, and appears to have replaced the struggling Fred Lewis as a regular in the Giant lineup. He’s getting the opportunities, playing well, and the Giants are currently on a roll. What more does one need to make a player a valuable commodity? Absolutely nothing.

Travis Ishikawa, 1B, San Francisco Giants: In the past month Ishikawa has hit five homers and 13 RBI, but more importantly it appears as if he has settled into the job at first base on a full-time basis. Not bad for a guy that didn’t hit that first long ball until May 25. Now that Pablo Sandoval is solidly entrenched at third base, the at bats are going to be there, making Ishikawa worthy of a look-see in deep mixed leagues and NL-only formats.

Mark Ellis, 2B, Oakland Athletics: Since returning this past week from a calf strain that sidelined him for virtually all of May and June, Ellis has hit two homers and driven in four runs. He does have intriguing power potential, but remember to temper your expectations from a BA perspective. If you currently have a hole to fill in your Fantasy squad’s middle-infield and are looking to boost those power numbers, Ellis could be just what the doctor ordered.

By Tim McLeod
This entry was posted on Sunday, July 5th, 2009 at 1:02 pm and is filed under BASEBALL, The Wire Troll, Tim McLeod. You can follow any responses to this entry through the RSS 2.0 feed. You can skip to the end and leave a response. Pinging is currently not allowed.