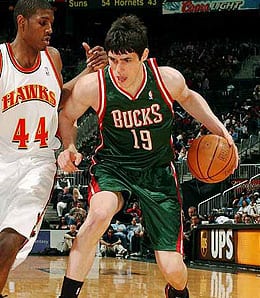 You need to keep an eye on Ersan Ilyasova (right).

All the talk today is on what rookie Brandon Jennings did Saturday as Milwaukee rebounded to outlast Golden State in a good old fashioned shootout.

But one Buck I’ve had my eye on all year is Ersan Ilyasova. He didn’t get a lot of burn Saturday as the Bucks went small against the run-and-gun Warriors, yet he still managed to go a perfect 5-for-5 from the line while scoring nine points with four boards and a block off the bench. Not bad considering how little he played.

Ilyasova is battling starter Richard Luc Mbah a Moute for minutes at SF, with Carlos Delfino and Joe Alexander also in the mix. Alexander, of course, is out for several more weeks with a hamstring injury, while Delfino took a DNP-CD Saturday.

I really think Ilyasova could be a serious producer given more PT. On Wednesday, he put up 17 points, eight boards and two blocks off the bench. The game before that, he pulled down 13 rebounds.

I’m not recommending picking him up yet, unless your league is quite deep, but Ilyasova should be on your watch list. There’s tremendous upside here.

If that Buck-Warrior game was a shootout, what the hell will this one be? Bring out your marginal Fantasy players for this game…there’s going to be some serious fireworks.

Consider that the Raptors are 5-4 yet have one of the worst defenses in the league, having surrendered 106.4 PPG. That tells you how much they’re scoring this year. And we all know that the Suns can light it up every night.

If Toronto is going to avoid dropping back to .500, however, it will have to end a seriously sick skid against Phoenix. The Raps have dropped 10 straight against the Suns, a fact that must make current Toronto GM (and ex-Sun head man) Bryan Colangelo fly into a rage. Come to think of it, he sort of always looks like he’s about to lose it.

Chris Bosh is again da man for the Dinos. He’s making an early case for a fifth All-Star appearance with 28 points and 11.8 RPG per game, both career highs. Uh, can you say contract year? On Friday, Bosh only got to the line eight times – the first time all season that he hasn’t reached double digits in trips to the charity stripe, a fantastic indication that he’s being extremely aggressive in the early going.

How about that 6-for-6 performance from beyond the arc so far? Bosh tied his career high with a dozen treys last season, and he’s already halfway there. If this truly is becoming a bigger part of his arsenal, Bosh may be ready to take the next step and join the truly elite players of the game.

By RotoRob
This entry was posted on Sunday, November 15th, 2009 at 4:27 pm and is filed under BASKETBALL, NBA Today, RotoRob. You can follow any responses to this entry through the RSS 2.0 feed. You can leave a response, or trackback from your own site.