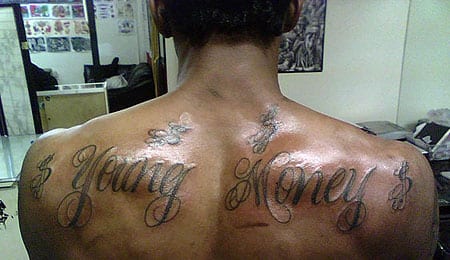 Still a teenager until Wednesday, we know the first part of Brandon Jennings’ guady tat is accurate. But it remains to be seen if he’ll be money well spent for the Milwaukee Bucks.

The 2009-10 RotoRob NBA Draft Kit is really rolling now as we release yet another team preview. While watching Spain finally take gold at the Eurobasket Championships really whets your appetite for some NBA hoops action, let’s put the Milwaukee Bucks — a team that’s suffered through losing records for half a decade — under the microscope.

The Bucks looked to be in good position to push for the seventh or eighth playoff spot last year before injuries derailed their season. Starters Michael Redd and Andrew Bogut missed a combined 95 games, and the team posted an 8-19 mark after the All-Star break. Clearly feeling the economic crunch, the club dealt Richard Jefferson (19.6 PPG, 4.6 RPG in ’08-09) to San Antonio for expiring contracts and spare parts. They also allowed restricted free agents Charlie Villanueva (16.2 PPG, 6.7 RPG) and Ramon Sessions (12.4 PPG, 5.7 APG) to leave without compensation.

In their place, the Bucks will be counting on rookie first-rounder Brandon Jennings, free-agent addition Hakim Warrick and trade acquisition Carlos Delfino to pick up the slack. Clearly, the Bucks are trying to build a consistently competitive team while creating financial flexibility, which is why GM John Hammond has been so aggressive in shedding long-term deals. In fact, the Bucks have only $18.7 million in salary committed (not including team options on Jennings, Delfino and Joe Alexander) beyond next season.

Milwaukee has a lot of interesting young pieces on its roster, but this team is short on established talent, which is a good way to lose a lot of games in the NBA. The best-case scenario for the Bucks would be that Jennings is ready to be a difference maker early on while young players like Luc Richard Mbah a Moute and Ersan Ilyasova continue to develop — in that case, they could at least contend for the eighth seed. A more likely scenario has them spending another year in the draft lottery.

Following the off-season overhaul about the only two spots that are set are Redd and Bogut. After that, it’s a free-for-all. Jennings should be the eventual starter at point guard after the Bucks allowed Sessions to leave, though Ridnour, who is entering the final year of his contract, may get the call early on. Newcomer Roko Ukic should also be in the mix, especially if they can find a taker for Ridnour’s expiring deal near the deadline. The team sent a clear signal by not matching the T-Wolves’ offer sheet to Sessions that they want Jennings to run this club. The only real question is how soon Scott Skiles will feel comfortable enough with Jennings to give him the keys to the offense.

Small forward might be the biggest mess of all with Mbah a Moute, Delfino, Ilyasova and Alexander all figuring to be in line for playing time. Mbah a Moute’s exceptional defense should earn him the starting nod, and his ability to log minutes at power forward means we should see a lot of the UCLA product in 2009-10. Ilyasova is back after two years in Spain, and the 22-year-old is a real wild card as the team has long liked his potential. Like Mbah a Moute, Ilyasova should play both forward spots, but he’s a more polished offensive player and a threat from three-point range. Delfino, who also played overseas last season, gives the team good depth and should fit well with Skiles’ defensive philosophy. A top-10 pick in 2008, Alexander might be the odd man out, though his physical gifts are unquestioned and at 22 is too young to give up on yet.

Signed to a one-year deal as a free agent, Warrick has averaged better than 11 points per game the past three seasons despite never logging more than 26.2 minutes per contest. He’s a little soft on the glass, and his defense is underwhelming at best, but he seems to be the best choice for Milwaukee. Of course, if he doesn’t embrace Skiles’ approach to the game we could see Mbah a Moute start at power forward with Warrick coming off the pine in a scoring-oriented role. Ilyasova is another possibility, and veteran Kurt Thomas could even be a factor early on, though smart money suggests he won’t finish the season with the Bucks.

It’s hard to classify anyone on the Bucks as a Fantasy stud, but Redd is our choice because of his scoring ability. He’s a safe bet for 21-24 PPG and a couple three-pointers a night. He’ll also help in free-throw percentage. Unfortunately, his peripheral numbers are shaky at best. Bogut should be a walking double-double and is an underrated shot blocker, but the lower back injury that cost him over half of last season continues to linger, which is worrisome.

On the surface this looks like an ideal scenario for Warrick to bust out. He’s working on a one-year deal, has produced better than 11 points and 4.5 rebounds per night in each of the last three seasons despite playing limited minutes and is coming to a team that lost three of their top four scorers from a season ago (the other one is returning from a season-ending injury). However, Skiles is a defensive-minded coach, and that’s an area in which Warrick has always struggled. Unless Warrick changes his attitude on that end of the court, don’t expect his numbers to increase appreciably.

On a team full of young players there’s no shortage of potential sleepers, but the guy we’ll be watching is Ilyasova, who has the size to play down low and the shooting touch to bury it from downtown. Years ago Chad Ford said Ilyasova had lottery talent and compared him to Andrei Kirilenko…and that was back when AK-47 was an All-Star level player. You can’t expect a leap like that this season, but he’d make an interesting late-round flier in deep leagues.

Ridnour is expected to open the year as the starter, but the Bucks didn’t use the 10th pick in the draft and let Sessions walk to leave Jennings on the pine. They absolutely love his talent and think he has the tools to be a star, which makes him someone to monitor as the season moves along. Jodie Meeks, the team’s second-round pick, could push for some time behind Redd. However, don’t expect him to make an impact unless Redd gets hurt or is traded.

The two big things to watch in Milwaukee are how quickly Bogut returns to form, and how long it takes before Skiles turns the offense over to Jennings.