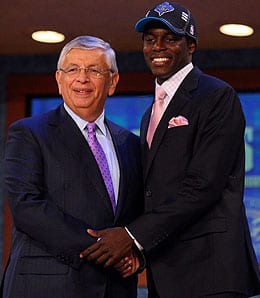 Even though he’s just a smidgen taller than the commish, Darren Collison needs to be picked up with CP3 ailing.

Welcome to Week Four of The Wire Troll, our weekly look at the ins and outs of working your Fantasy league waiver wire. This week, those ins and outs abound: Let’s look at who’s in, who’s out and who’s back.

The big news of the week concerns Fantasy uber-guard Chris Paul, who sprained his ankle Friday night and is expected to miss at least a week of action – though I’ve seen estimates of up to a month. There’s no way to know for sure at this point, but stop reading right now and go pick up Darren Collison, who figures to take over at point guard while CP3 is sidelined. Go ahead, do it…I’ll wait.

In other news, Golden State coach Don Nelson is rumoured to be on his way out, and the axe could reportedly fall as early as this week. Nellie’s lineup Tilt-A-Whirl has long been the bane of Fantasy owners everywhere, and if he departs many things stand to change in Golden State. Stay tuned.

Orlando Magic forward Rashard Lewis returns from his 10-game suspension on Monday, so it should be safe to activate him in weekly leagues. Coach Stan Van Gundy has made no secret of the fact that Lewis will step right back into the starting lineup when he returns. Washington Wizards Antawn Jamison and Mike Miller are scheduled to return from shoulder injuries, but both should be expected to show signs of rust, making them riskier plays in weekly leagues.

Brendan Haywood, Washington Wizards: We recommended Haywood two weeks ago, but he’s still available in roughly one-third of all Yahoo! leagues and about three-quarters of ESPN groups. His numbers might slip slightly when Jamison returns, but he was still averaging a double-double and over two blocks per game as of November 14. Grab him if he’s still available.

Marreese Speights, Philadelphia 76ers: Elton Brand continues to struggle with adapting to the Philly offense, and Speights has been the beneficiary of that saga. Through nine games, Speights’ average line stood at 13.8/6.9 with 1.0 block in 24 minutes per game, while Brand has posted 9.7/5.2/0.7 in 26-plus minutes. Speights’ play should have him on your roster in larger leagues, and at least on the radar screen in medium-sized formats.

Ben Wallace, Detroit Pistons: No, this isn’t the NBA Seniors Division Report — Wallace has awakened the echoes of bygone days this season, averaging 9.5 rebounds, 1.5 blocks and 1.5 steals through eight games. He looks like the Big Ben of old (minus the hair), but just like Old School Ben, New School Ben can’t score a lick (only 3.1 PPG). If you’re set with points but lacking for boards, blocks and steals, turn back the clock and look to Big Ben in your hour of need.

Carl Landry, Houston Rockets: Landry was featured in our first Wire Troll of the season, but despite averaging 14.1 points, 5.1 rebounds and 1.1 blocks through nine games he is owned in only about half of Yahoo! leagues. He has picked it up a bit in November, posting 15.3/5.3/1.3 through his first six games.

Kelenna Azubuike, Golden State Warriors: With all the tumult in Golden State, Azubuike just keeps rolling along, averaging 15.8 points, 5.6 rebounds, 1.2 treys and 1.2 blocks through six games in November. He generally stays on the court through most of Nellie’s line-up tinkering, making him a rare “safe” Warrior option for Fantasy owners.

Mike Miller, Washington Wizards: Before going down with a shoulder sprain November 4, Miller was averaging 8.4 points, 8.2 boards, 3.2 assists, 1.2 treys and 1.4 steals per game. Talk about filling up the box score. Many owners panicked when Double M hit the shelf, and he’s currently owned in about half of Yahoo! leagues. Miller is scheduled to return this week, and his skill as a facilitator should make Washington’s scorers even more effective, Don’t look for big points from Miller, but he’ll provide at least modest help in just about every other category.

Toney Douglas, New York Knicks: The 29th pick in the 2009 draft earned his first start of the season November 11, and responded with 23 points, four rebounds and one assist. Coming on the heels of his 21-2-1 line off the bench the previous game, the effort has thrust Douglas onto Fantasy radars all across the land. Though it’s tempting to say Douglas will supplant the struggling Chris Duhon at point guard, the fact is that the rook is more of a two-guard than a point. He averaged only 2.9 dimes per game at FSU, so running an offense is not his strong suit. That doesn’t mean that deep leaguers shouldn’t be all over this kid for his points and treys – just keep an eye on how the backcourt minutes sort out now that Nate Robinson is back on the court.

Darren Collison, New Orleans Hornets: If you heeded my advice above, hopefully by now you own Collison in at least a few leagues. The injury to CP3 creates an enormous opportunity for the rookie, and he cashed in that chance by throwing in 18 points, dishing out two assists and posting two steals in 26 minutes the night Paul went down. Reports vary on how long Paul will be out of action, but Collison’s value will skyrocket while the superstar is sidelined…and if the youngster delivers, he should see increased run even after CP3 returns. Don’t forget: Collison was a rock-solid point guard at UCLA, so the kid can run an offense. Weekly leaguers take note: New Orleans plays four games this week, but only twice in Weeks Five and Six.

Anthony Morrow, Golden State Warriors: Morrow has averaged 14.2 points and 2.5 treys through his first six games in November. He and the aforementioned Azubuike are about as consistent an option as can be found in Golden State right now, so if you’re in a league with 12 or more teams, Morrow is definitely worth a roster spot; just be prepared to cut bait depending on how Nellie’s situation plays out.

Nate Robinson, New York Knicks: Little Nate played almost 23 minutes in his first game back from an ankle injury that had sidelined him for six contests. The diminutive backcourt man amassed nine points, four assists and one steal; let the Duhon bench-watch begin. Robinson and Douglas figure to cut into Duhon’s minutes, but Nate is more of a true point than Douglas is. Little Nate is available in about half of Yahoo! leagues, so grab him if you needs threes or steals – with the upside for considerably more if he supplants Duhon.

By Buck Davidson
This entry was posted on Saturday, November 14th, 2009 at 6:02 pm and is filed under BASKETBALL, Buck Davidson, The Wire Troll. You can follow any responses to this entry through the RSS 2.0 feed. You can skip to the end and leave a response. Pinging is currently not allowed.