The Wire Troll: Got Stuffing? 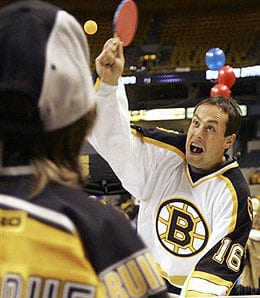 We can’t recommend Marco Sturm for your Fantasy ping pong team, but for your hockey squad? Go for it.

There are only 10 days until American Thanksgiving (well at Press Time, anyway). This week’s Wire Troll is a shortened, flu-ridden edition. I promise that what I type will not make you sick. Typing words from a keyboard here will not get you sick there. However, if you do not start picking up some of these guys to help overcome your injuries, you may feel more and more ill as time goes on.

You can think of it this way: there are always the glue guys or the “stuffing.” With mounting injuries this season, the waiver wires are now getting harder and harder to troll. So we found four players that could be worth taking a look at in your league. Our finds are based on Fantrax, Yahoo!, and ESPN leagues this week.

Marco Sturm, LW, Boston Bruins: He is available in most Yahoo! leagues, but not Fantrax or ESPN, however, the key is he is getting more and more ice time with each game. Sturm has averaged nearly 18 minutes a night in the last six games and that alone helps in the ATOI (Average Time On Ice) category that plagues so many. The points will come for Sturm, who is still finding his way a bit. Do not be alarmed by the mere two points he’s managed in the last five games either. The key is looking ahead and Boston plays a “meatier” schedule in the next month chalk full of Fantasy opportunity for a guy like Sturm. So far he has been healthy and — knock on wood — hopefully he stays that way.

Niklas Hagman, LW, Toronto Maple Leafs: I know some owners are dropping him, but keep the faith. Four of his six goals are on the Power Play, so when Toronto gets PP chances, Hagman should start converting them. Also, the shots are definitely there at 49. I understand that other than the hat trick against Anaheim. he has not done much. But Hagman has potential and with guys like Phil Kessel as teammates, that potential could quickly turn into reality. Do you really want to miss the boat? I sure don’t. In some leagues, I learned that the hard way with guys like Dustin Penner and Tomas Kaberle that you do not wait around when the opportunity presents itself even if you go wrong with it.

Andy Greene, D, New Jersey Devils: Is this a homer alert type pick? No. Greene is only owned in 8-10 per cent in most leagues, yet he gets No. 1 or 2 type ice time for defensemen. That in itself is a stuffer you can use on your roster to rack up some points here and there plus some big ATOI numbers. It’s a no brainer. Add in the nine points he has, which leads Devil defensemen, and you really do have the makings of a feel good Fantasy hockey story from New Jersey not involving Patrik Elias, Zach Parise or Rob Niedermayer. Greene plays the game right and is a class act. He really has come a long way from his earlier stints with New Jersey. Pick him up today while you can.

Marek Svatos, RW, Colorado Avalanche: On the surface, Colorado was due for a bit of a reality check. After a shockingly good start, the team has struggled to a 2-4-1 mark over its past seven games. But the strange thing is that during this stretch, Svatos has finally woken up. Three goals and one assist in his last five games has Fantasy owners hoping for a season like he had when he potted 32 goals in 2005-06. That season wasn’t a fluke (don’t forget he also scored 26 times in 2007-08). The simple reality is that if Svatos shoots, he can score (one goal for every seven shots on goal). The two keys for him will always be shot selection and health. The talent is there and the fact that he’s owned in less than 5 per cent of leagues screams pick him up. Do it now before Colorado starts turning it around again.

Next week we will bring the turkey and all the trimmings with a special Thanksgiving themed edition of The Wire Troll. Until then, may all your Fantasy hockey ventures be successful this coming week.

By Chris Wassel
This entry was posted on Monday, November 16th, 2009 at 4:23 pm and is filed under Chris Wassel, HOCKEY, The Wire Troll. You can follow any responses to this entry through the RSS 2.0 feed. You can skip to the end and leave a response. Pinging is currently not allowed.