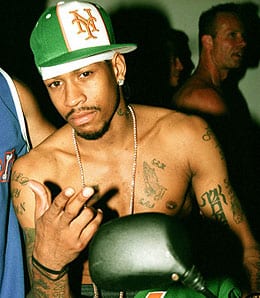 Allen Iverson has left the Grizzlies and no one knows when and if he’ll be back.

There hasn’t been much to be overjoyed about so far this season if you’re a Memphis Grizzlies fan. This team has dropped six straight, Allen Iverson is already a major distraction and they have to play Wednesday in Houston, a place where Memphis has lost six straight times.

I wondered about how much better – if at all – Memphis would be with the addition of volume shooters Iverson and Zach Randolph, and the early answer is not at all, as the team is off to its worst start since 2005-06.

Iverson started the year on the sidelines with a torn hammy, missing the first three games. He came back and was unimpressive in three games off the bench and the whining about being a reserve started almost immediately. Now, AI has left the team for personal reasons and is apparently at home in Atlanta. And the way the team is talking, it’s not a sure bet that he’ll be back.

Hell, if his own freaking coach doesn’t know if he’s coming back or not, what’s a Fantasy owner to think?

Iverson is only owned now in just over half of Yahoo! leagues, and I can see that number falling rapidly as his leave of absence extends.

Meanwhile, the defense in Memphis has been a joke. The Grizz are giving up 112 points per game after showing progress in that area last year. Of course, The Answer isn’t the answer to that problem whether he’s there or not.

This team has such a great young core, but the mistakes they made this offseason that everyone seemed able to spot except them are coming back to haunt them already. No, obviously it’s not too late to salvage this season, but Memphis has serious work to do to get off the schneid. And it’s going to have to start with some good old fashioned D.

By RotoRob
This entry was posted on Wednesday, November 11th, 2009 at 7:12 pm and is filed under BASKETBALL, NBA Today, RotoRob. You can follow any responses to this entry through the RSS 2.0 feed. You can leave a response, or trackback from your own site.