Fantasy Hockey Roundtable: How Injuries Hurt Us All 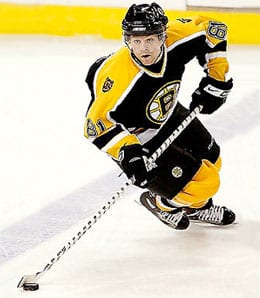 This week, we asked our panel: “We’ve seen a lot of serious injuries so far this season. Who’s absence is going to most negatively affect his teammates’ statistics?” Here’s what the panel had to say on the matter:

Last season, the Boston Bruins held the best record in the Eastern Conference. They were the second-highest scoring team and owned the fourth-ranked Power Play. This season, they are 26th in offensive and their PP ranks 27th.

At quick glance the loss of Phil Kessel via trade and Milan Lucic to injury appears to be the issue, but it’s the injury to Marc Savard that has hurt Boston and his teammates’ stats the most.

The leading scorer on the Bruins is Patrice Bergeron with 10 points in 16 games. At that pace, he would end the season with 51 points. The other top scorers on the team aren’t exactly on pace for banner years, either: Michael Ryder (31 points) and Blake Wheeler (41 points). Zdeno Chara has had a slow start but is on pace for 46 which is not far behind his 50 from last season. The biggest area of concern is the +/- as Bruins led the league last season in this category.

Upon Savard’s return, I would expect to see the Bruin offense pick up dramatically as the team was only able to pick find the back of the net four times in five games last week. Savard is the driving force behind their offense and if the Bruins are unable to sign him this offseason I would be looking to quietly shop anyone in a Bruin jersey in your keeper leagues not named Chara or Tuukka Rask.

To answer this question effectively, I should identify which team can least afford the injuries they have right now. That team would be the Carolina Hurricanes, who are dead last in the NHL standings and the proud owners of a 13-game losing skid. Not surprisingly, their two impact players — Eric Staal and Cam Ward — are sidelined.

The plus/minus was already a disaster before Ward was accidentally cut in the leg by Rick Nash’s skate. But any savvy Fantasy owner should know that Manny Legace is not an upgrade in net, meaning that the frigid plus/minuses of Joe Corvo (-9), Joni Pitkanen (-10), Aaron Ward (-12), and even former Selke Trophy winner Rod Brind’Amour (-13) will not improve anytime soon.

Staal’s absence means that oft-injured regular linemate Erik Cole is practically worthless in Fantasy leagues this season (one point in seven games). Heck, if Jussi Jokinen (10 points in 17 games) is your leading scorer, you know that your team is in big trouble.

The loss of Cam Ward is going to kill the +/- for the Hurricanes. They were forced to bring in veteran Manny Legace from the AHL. The whole team has already been awful this year and we’ve seen their top scorer, Eric Staal, go down as well.

Andrei Markov’s injury will also have severe implications on his team, as we have already seen.

And your humble host?

I think Marian Hossa’s absence is really hurting the Blackhawks.

How can his absence have impact if he’s never played a game for them?

No one on the team has more than six goals. Jonathan Toews has just two. This is a team that’s lost a little bit of its swagger. Hossa in the lineup will equal almost instant confidence.

On a more strategic level, Hossa in the lineup draws attention from opposing defenses. And that lack of attention on Toews and Patrick Kane should translate into more goals.

Plus, when he wants to be, Hossa can be quite a playmaker. We didn’t see it too much in Detroit last season, but he put up two 50+ assist seasons in Atlanta and there’s no reason to think he can’t revert to that dishing style in Chicago.

By Steven Ovadia
This entry was posted on Friday, November 13th, 2009 at 2:16 pm and is filed under HOCKEY, Roundtable, Steven Ovadia. You can follow any responses to this entry through the RSS 2.0 feed. You can leave a response, or trackback from your own site.