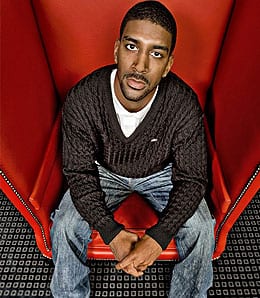 O.J. Mayo is still the starter in Memphis, but could sit plenty with AI in town.

The 2009-10 RotoRob NBA Draft Kit rocks on today with another team preview. We’re now over a quarter of the way through these puppies. So while the New Jersey Nets think about being taken over by the richest man in Russia, let’s check in on the very slowly progressing Memphis Grizzlies, a team that’s off-season activities left many experts scratching their heads.

Although the Memphis Grizzlies had one of the worst offenses in the NBA last year, there were several reasons to be optimistic about the future of the franchise. Improved defense helped the team add a couple of wins to their record last season; Rudy Gay, Mike Conley, O.J. Mayo and Marc Gasol combined to give the team an extremely promising young core; and the team lucked out on lottery day, moving up to the No. 2 overall pick, which they used to snag UConn behemoth Hasheem Thabeet.

No one was expecting a gargantuan leap forward this year for the Grizz, but some modest improvement is expected as the younger stars continue to develop. And really, that is the key for this team – time for the kids to improve.

So why, oh why, did the Grizzlies feel the need to bring in two big-name veterans, each with a reputation for being me-first types and both of whom are capable of creating serious chemistry problems – not to mention having a penchant for off-court shenanigans? The worst part is that the trade acquisition of one-time Jailblazer Zach Randolph and the free-agent signing of Allen Iverson is going to curtail the minutes this team can give to Mayo, Conley, Gasol and Darrell Arthur, another promising youngster.

And how much better will Memphis be with the addition of two more volume shooters? Probably not much, if any. After adding AI and Z-Bo to Mayo and Gay – two other players who demand the rock a hell of a lot – perhaps the Grizzlies should consider rebranding themselves as the Hogs.

Of course, in the past couple of weeks, all the buzz has been on the team’s signing of The Answer. Wooed by the Bobcats to an extent, and also reportedly receiving an offer from Greek team Olympiakos, Iverson opted instead to join Memphis for substantially less green than he is used to (just over $3 million compared to the $20+ million he made last season). Of course, this was God’s plan, apparently. AI tweeted the following after inking his deal with the Grizz: “God chose Memphis as the place I will continue my career.”

So, sorry about that Mayo and Conley — if you lose PT to Iverson, it’s simply God’s will.

Sure, maybe adding 13-year vet AI will help generate interest in a club that ranked 29th in attendance last season. But at what cost to the long-term development of this team into a legitimate Western Conference contender, or at least a playoff team?

Mayo is still the starter, but Iverson will eat into both his and Conley’s minutes off the bench. Also, while Gasol retains his gig as the starting centre, watch for youngsters Thabeet and Hamed Haddadi to get long looks as well, especially once Memphis falls out of the playoff picture, say, by late-November.

As I alluded to previously, I think the biggest battle in Memphis will involve the number of touches each player is getting. Last season, the Grizzlies averaged 77 field goal attempts per game. Consider that Iverson has averaged over 22 FTAs per game over his career, Randolph put up over 17 per game last season, Gay had 16 attempts per game last year (which was actually down from his sophomore season), and Mayo hoisted 15.6 shots per game as a rookie. That’s over 70 attempts per game from four players. Needless to say, that’s not going to be possible this season, but still, everyone else will have a tough time getting their shot on in this lineup.

I’m going out on a limb here by suggesting that Iverson is going to rebound in a big way this season. No, I’m not talking about him threatening for a fifth scoring title, but I can definitely see AI getting back into the top 10. He’s got a lot to prove, and I believe he still has at least one dominant season left in the tank.

I also think that Gay is going to take it to the next level after a somewhat disappointing season in ’08-09. He spent the summer getting bigger and stronger in an effort to be able to improve his post game.

I love Mayo’s long-term future as a volume scorer, but I just can’t see how it’s possible he’ll get enough touches to build on what he accomplished as a rookie. Don’t overpay for him on draft day.

Don’t look for a lot of scoring from him, but Conley can thrive as a pass-first guard in this offense. Assuming he gets his 34 to 36 minutes per night, look for him to average about seven assists per contest. There’s a lot of upside here.

The Grizzlies are packed with freshman on their roster, most notably Thabeet, the 7’3” shot-blocking machine originally from Tanzania. The tallest player to ever don a Huskies’ uniform, Thabeet should excel defensively right from the get-go because of his immense size and excellent rebounding ability. Unfortunately, his jump shot and post skills need a lot of refinement, so don’t expect much from him offensively in the early portion of his career. Still, for nothing other than blocks and boards, Thabeet will be a Fantasy asset in year one.

With their second first round pick, Memphis selected DeMarre Carroll, a forward out of Missouri. He’s athletic, and will be a solid NBA defender, but his post skills make it a stretch for him to see much time at the four instead of the three.

Sam Young, the team’s second rounder, has very good back to the basket scoring skills, especially his turnaround jumper, but creating his own offense is not his forte.

Trey Gilder was signed out of the D-League, where he showed he can be a solid scorer and rebounder. But he’s skinny and already 24, so it’s questionable if he has the strength necessary to succeed in the NBA.

It’s a Fantasy story of a different nature, but how will Z-Bo take to the Memphis area strip clubs? How hungry is Iverson to shut up his detractors and get back to the top? Will a trimmed down Gasol take it to the next level this season and become a more consistent performer? Can Marcus Williams keep his weight in check, or will his diet continue to consist of seven Hardee’s Monster Biscuit sandwiches every morning? Can Gay improve his post skills enough to become the All-Star many expected him to develop into?

By RotoRob
This entry was posted on Wednesday, September 23rd, 2009 at 8:09 am and is filed under 2009-10 RotoRob NBA Draft Kit, BASKETBALL, RotoRob, Team report. You can follow any responses to this entry through the RSS 2.0 feed. You can leave a response, or trackback from your own site.