NBA Today: How about Hollins? 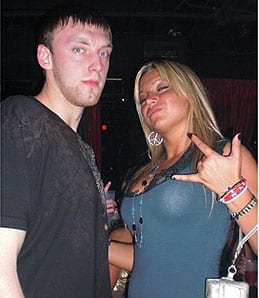 While you try to figure out who’s scarier — Oleksiy Pecherov or his skanky douchebag — maybe Ryan Hollins will get a chance to start.

With Minnesota continuing to struggle, especially defensively (Sunday the T-Wolves let Portland shoot 50 per cent from the field and were outrebounded 49-39), isn’t it time to give someone else a chance to fill in for the injured Kevin Love? Sure, Oleksiy Pecherov had that one big game last week, but he’s disappeared since. And on Sunday, Ryan Hollins saw more action than Pecherov. Might Minny give the young big a chance to start? I’m not suggesting you run out and pick up Hollins, who is clearly still a project, but I’m keeping my eye on this situation. We expected Hollins to be a key bench player for the Wolves, but perhaps he’ll emerge with some value if he gets a chance to start. Deep sleeper alert.

Speaking of the Blazers, coach Nate McMillan has refused to send Steve Blake to the bench, so instead, he’s shifted two-guard Brandon Roy to SF (sending Martell Webster to the bench) so he can finally insert Andre Miller into what is now a three-guard starting lineup. Well, it’s weird, but it’s working as the Blazers have won both games since the change. Roy isn’t off to a great start, and not surprisingly — given all the PG turmoil — he’s struggled with his shot. Sunday, he sunk just 1-of-6 in his worst offensive game of the young season. He didn’t even get to the line once, which really sucks considering he’s been superb from the charity stripe so far, draining a career best 85 per cent. On the plus side, Roy was able to pitch in despite the offensive stinker. He matched his season high with six boards and set a new season high with seven assists. Yes, it’s been a somewhat sluggish start for the hugely popular Roy, but don’t worry – you’ll get a great return on your first round investment soon enough.

New Orleans, surprising many with their struggles in the early going, visits the Clippers, who are surprising no one with their losing record. However, this is a chance for the Clippers to get back to .500 against a team that is floundering. And they come in to this game hot, having won three straight games to shake off an 0-4 start. Unbelievably, this matches the longest winning streak LA had all of last season. Yes, the Clips are pathetic. But how about some love for Chris Kaman? I grabbed him in the ninth round this year, and so far am loving the results. He is LA’s leading scorer and rebounder and, with Blake Griffin still MIA, Kaman is getting as much PT as he can handle and he’s making the most of it. I’m sort of torn here…I keep cringing when I see the workload he’s tackling, knowing full well that he’s among the most injury-prone men in the game. But how can I help but be overjoyed at all those minutes when Kaman is suddenly the go-to guy in the Clip offense? He’s averaging 16 FGAs per game, a huge boost considering his previous high was 12.5. His FT shooting has even improved (career-best 79.5 per cent) and the big mountain man is scoring a shocking 23 PPG. I’m loving the production, but am wondering if I should sell high. The Hornet D has been pretty sad so far, so Kaman could be in for another big night Monday.

By RotoRob
This entry was posted on Monday, November 9th, 2009 at 3:06 pm and is filed under BASKETBALL, NBA Today, RotoRob. You can follow any responses to this entry through the RSS 2.0 feed. You can leave a response, or trackback from your own site.