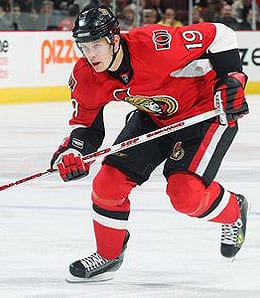 He’s back now, but Jason Spezza is just one of many stars who has missed time this season.

Seeing strange players and a ton of callups that have you looking at your program like WTF is this? Well, you are not alone. A rash of injuries has plagued the NHL the likes of which I have not seen in a decade or two. Usually when you see injuries coming in succession you see it affect the second-, third- and even fourth-line players. However, this year the star is definitely feeling the injury bug and several are either currently hurt or have missed time this season. Guys like Evgeni Malkin, Alex Ovechkin, Jason Spezza and Roberto Luongo are all nursing the dreaded ouchies, although Spezza returned a few days ago.

In all, there are now approximately 115 players in the NHL with some kind of injury that is keeping them out of the lineup. That is hair less than four players per team.

So what can you do to combat the crazy bug (bad pun)? Well for one, just hope your player also does not get the swine flu (right, David Krejci?). This is just nuts seeing all these players out of the lineup. Literally whole Fantasy rosters decimated by injuries.  I have seen cases of teams with six, seven, or even eight players on the IR, DTD, or out (O) of the lineup. Compounding the problem, this does not seem to be getting better but only worse. I have seen more AHL callups than I can count.

There was an estimate that roster moves are up almost 20 per cent from this time last year. Talk about insanity for the fans of teams…but for the Fantasy hockey fan, it is maddening.

For example, the Devils are already without guys like Patrik Elias, Jay Pandolfo and Johnny Oduya. Now you can add Rob Niedermayer and Colin White to the list as both are listed day to day. Even the innocent hit can be harmful. Just falling awkwardly is cause for panic. The hysteria has not even reached its apex.

No one knows what is next, but here are three players that you can get (one forward, one defenseman and one goalie) that may just help and they are likely on your waiver wire.

Niclas Bergfors, RW, New Jersey Devils: : He has slumped mightily and that has caused a lot of owners to cut bait and run. However, not so fast everyone! Bergfors has 43 shots in 13 games and three PPGs including two on Wednesday. He has a deceptively fast windup similar to Ranger star Marian Gaborik and eventually he was bound to start getting it behind the goalie and that happened Wednesday in a big way. As Bergfors finds his role with New Jersey a bit easier expect his scoring to go up. Honestly, you could do worse at this point. What? Wait for Olli Jokinen to break out? Yeah, that’s a good one!

Filip Kuba, D, Ottawa Senators: When Kuba is 100 per cent, he can get you 40-to-50 points. That is gold in these days and right now he is healthy. Defensemen usually do not score a point a game anyway these days (except for Mike Green last year). Kuba is the type of player who is ideal on the power play. His low, hard shot can set up easy rebounds for forwards and be an instant boost to your Fantasy team. Most leagues still have Kuba listed as quite available. Grab him now before any more defensemen get injured and not only will you not regret it but at the very least you will have a back-up plan in place in case any more guys go down. By the way, do not expect Anton Volchenkov to continue to lead the Sens in scoring from the blue line.

Ondrej Pavelec, G, Atlanta Thrashers: We’ve been saying for a while that if Pavelec could ever get over his “monthly,” he could be a starter. Now he gets his chance as Kari Lehtonen is out an additional 6-to-8 weeks after having back surgery. Pavelec can turn in 50-save stunners like he did against Ottawa, but he can also implode like an explosive cocktail we all know. However, with options dwindling fast and the fact that he is available in most leagues (at least for now) he’s a viable pickup. I firmly expect Pavelec to be the starter for most of the rest of the season. Get him now! Literally read this and see if he is available. If not, try to trade for him ASAP.

Next week we will have some fun and salute the vets…literally. Thanks again and enjoy the hockey-like weather.

By Chris Wassel
This entry was posted on Monday, November 9th, 2009 at 12:33 pm and is filed under Chris Wassel, HOCKEY, The Wire Troll. You can follow any responses to this entry through the RSS 2.0 feed. You can leave a response, or trackback from your own site.