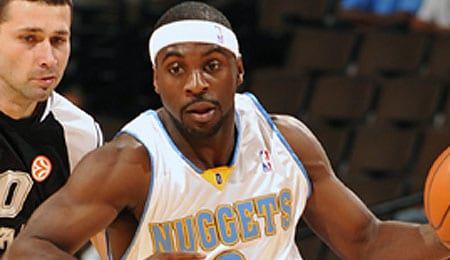 Ty Lawson had a sweet debut, but let’s not get carried away until he gets more PT.

Ty Lawson was a hot pickup in Week One after his great NBA debut, even making an appearance in our first NBA Wire Troll of the season. But let’s take a bit of a chill pill here. While Lawson deserves to be on your watch list and has already exhibited that he’ll be a huge pickup if Chauncey Billups gets hurt, right now he’s only worth rostering in deeper leagues. Tuesday night, for instance, Lawson saw only 13:25 worth of action, even though Denver won easily in Indy. I love the fact that the former Tar Heel has gotten at least one steal in every game so far, so clearly he’ll be a great source of steals once he lands a steady 20 to 25 MPG gig, but like I said, for now, just watch.

We all knew that Kevin Durant was poised for superstardom this year, but how about the leap that Jeff Green has taken? He’s getting seriously heavy minutes this season and has responded brilliantly. Green is employing his perimeter game more, but he’s not simply settling for outside shots – he’s also getting to the line more often. His rebounds and steals are up too, and Green is truly proving to be an across-the-board talent in the early going, so kudos to those of you who drafted him. It’s early, but what a combo: heavy minutes, over 50 per cent shooting from the field, 83.3 per cent from the line, two treys per game, 7 RPG, 2 APG, 1.5 SPG, 1.3 BPG and over 19 PPG. Wow. Can you say Fantasy stud? And he’ll play the entire season as a 23-year-old! No wonder we were so bullish on the young Thunder corps when we previewed the team in September.

As we expected, Matt Barnes is starting to have an impact off the Magic bench, making him a decent wire target as long as Rashard Lewis is suspended (another six games to serve) and Vince Carter is out. In the last two games, Barnes is starting to get more touches and has picked up the rebounding, assists and blocks while scoring in double figures in both contests. Barnes is averaging 1.5 SPG, but all six of his thefts came in one game, so that’s an anomaly. If you need a short-term boost, Barnes makes for a nice pickup for the next week or two.

The Golden State Warriors are seeking their first win of the season – one of just three teams still winless so far – and will get a good opportunity Wednesday at home against the Grizzlies, who have only won once in their first four games. Defense is once again the issue in the early going for the Warriors. Last season, they gave up more points than any other NBA team, and through their first two games this year, they’re even worse. Fortunately, the Grizzlies are coughing up even more points than Golden State, so tonight could be a serious offensive bonanza – bring out your fringe Fantasy players! Look for a big night from Monta Ellis, who’s off to a fine start. He’s taken a bigger role in the offense, and although he no longer shoots many from downtown – he’s used to put up almost two 3-ball attempts per game, but has only hoisted one try in the first two games – he’s improved his scoring by being more aggressive. Ellis is getting to the line more often, upping his average to 22.5 PPG along the way. It’s a tradeoff Fantasy owners are probably willing to take, although having a guard that doesn’t sink 3-pointers does force you to seek treys from a non-traditional source.

By RotoRob
This entry was posted on Wednesday, November 4th, 2009 at 6:36 pm and is filed under BASKETBALL, NBA Today, RotoRob. You can follow any responses to this entry through the RSS 2.0 feed. You can leave a response, or trackback from your own site.