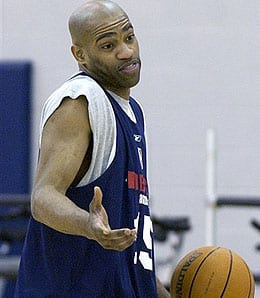 Vince Carter brings his talent and ‘tude to the Magic Kingdom.

We’ve got more of the 2009-10 RotoRob NBA Draft Kit for your reading pleasure today. While you wonder just what Delonte West was up to during his absence, let’s take a look at the team that upset West’s Cavs in last season’s Conference Semifinals, the defending Eastern Conference Champion Orlando Magic.

For a team that made the NBA Finals last season, the Orlando Magic sure are not satisfied. A successful 2009-2009 campaign saw the Magic be the surprise of the league, defeating not only the defending champion Boston Celtics in the playoffs, but the number one seed Cleveland Cavaliers, led by LeBron James. But its 4-1 drubbing by the Lakers in the Finals prompted Otis Smith and the rest of the Magic front office to say “Change. Yes We Can!” And as a result, a big offseason took place in the Magic Kingdom.

It seems Fantasy owners either love or hate Vince Carter. If you’re a Fantasy owner who is also a Magic fan, it is time to love Carter. This offseason saw the Magic trade away rookie sensation Courtney Lee, Rafer Alston and Tony Battie to acquire Carter and second-year forward Ryan Anderson. This was quite a surprising move considering how high some people believe the Fantasy ceiling is for the impressive Lee. The Magic also lost one of the best defensive players from last year’s Finals team in Hedo Turkoglu when he signed with the Toronto Raptors as part of a sign-and-trade deal. Finally, the Magic was able to sign free agent forward Brandon Bass, known for his defense, as well as retaining promising centre Marcin Gortat despite the fact that the Mavericks signed him to a large offer sheet.

That is a fairly busy offseason for a club with a bright future. The Magic expect Jameer Nelson to be healthy for the entire upcoming season and that Dwight Howard will only continue to improve his offensive game.

If Pietrus isn’t up to the task as the starting SF, Carter could take that job, leaving Pietrus and Redick to slug it out for time at the two-guard spot. Pietrus is very injury prone, so the still-intriguing pure shooter Redick has a chance to emerge as a real sleeper.

Sure, he can’t shoot free throws and might kill your Fantasy team in one category, but you still have to love Howard. He did progressively get better towards the end of the season at the line (until a bit of a swoon in April), and even had a few solid games in the playoffs. Plus the guy gives you a double-double night in and night out, meaning it doesn’t matter how ridiculous head coach Super Mario jerks around his front line. Howard will be in there every night averaging a double-double just like last season’s 20.6 PPG and 13.8 RPG. Whether you like Superman or not, you have to know he’s a great Fantasy player.

This is too easy. Carter will play hard for a month or two and will eventually start not giving a damn when he realizes Howard and Nelson are the stars of the team. He can be a great scorer, albeit a ball hog, when he feels like playing hard. But that’s always been Carter’s problem wherever he has played throughout his career. He only plays when he feels like it! Expect a rollercoaster of stats from Carter this season. Ride him while he’s hot, and bench him as soon as he starts to look too stoned to care during the games.

Free agent pick up Bass should be a great man off the bench for this year and could potentially be a viable sleeper option. He averaged 8.5 points per contest as well as grabbing 4.5 boards per game last season. Bass is also almost an 87 per cent free throw shooter, which should help owners out right there if he can slash to the hole and receive the freebie opportunities.

Orlando has no rookies on this year’s team, having dealt away its first round pick in a three-team deal last season that netted it Rafer Alston. The Magic traded its 2009 second round pick back in 2007 as part of the Rashard Lewis deal.

Make sure you keep a close eye on how Nelson is recovering from his various injuries last season. When healthy, he is one of the best point guards in the league and a fantastic Fantasy component, averaging 16.7 points per contest and 5.4 assists. With another year under his belt, he should only improve on those numbers if healthy. Also make sure to keep watch Carter. If he looks like he will play hard all season he should be a 25 point a night guy who could help your Fantasy team as long as his field goal percentage from jacking up 40-foot 3s doesn’t hurt you.

By Daniel Olson
This entry was posted on Friday, October 2nd, 2009 at 9:42 am and is filed under 2009-10 RotoRob NBA Draft Kit, BASKETBALL, Daniel Olson, Team report. You can follow any responses to this entry through the RSS 2.0 feed. You can skip to the end and leave a response. Pinging is currently not allowed.