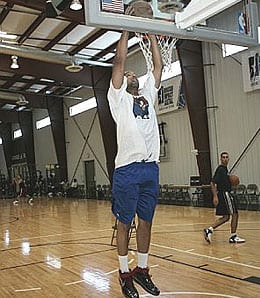 Drew Gooden is the new man in the middle for the Mavs.

The 2009-10 RotoRob NBA Draft Kit rages on with yet another team preview. We’re now over a third of the way through these puppies, so stay tuned. And while you wonder about the future of Stephen Jackson in the zoo that is Golden State, Buck let’s us know if the Dallas Mavericks are poised to turn things around after two descending seasons in a row.

In 2008-09, the Dallas Mavericks were once again an upper-crust NBA franchise, posting their ninth consecutive season of 50 or more wins. Once again, they were an entertaining group to watch, rolling up over 101 points per game while showcasing two of the league’s best players in point guard Jason Kidd and power forward Dirk Nowitzki.

However, just as in each of the past nine seasons, the Mavs came up short in the playoffs, quietly bowing to the Denver Nuggets four games to one in the Western Conference semifinals. Once again, the Mavericks’ season refrain was “close, but no (Cuban) cigar.”

The Mavs did not stand pat during the offseason, but their moves were a bit of a roller coaster ride. Powerful young forward Brandon Bass departed for Orlando, while Dallas failed to woo restricted free agent big man Marcin Gortat away from those same Magic, who surprised many by matching the Mavs’ hefty offer sheet.

Dallas brought a solid veteran into the fold by inking forward/centre Drew Gooden to a one-year deal, but the big news of the summer came when the Mavs landed former Phoenix, Miami and Toronto forward Shawn Marion via a four-team trade. Marion was a big-time player during his days with the Suns, but has declined somewhat since leaving the desert. The Mavs are hoping that the man they call The Matrix can revive his career in Big D – and maybe help this team finally climb to the top of the NBA mountain.

Dampier rakes in big bucks to set picks, lumber around beneath the basket, set picks, block a shot occasionally, set picks and slop in a half-dozen or so points per game. Restrain your enthusiasm, Fantasy owners. However, the big man’s job could be in serious jeopardy now that Gooden is in town. Gooden averaged 11.9 points and 7.1 rebounds for three different teams last season, but posted his best numbers (14.6 ppg, 9.6 rpg) in 10 games as a starting centre.

Gooden is six years younger and more athletic than Dampier, and seems a better fit for Dallas’ up-tempo offense. He’s not a shot blocker, but Gooden gives the Mavs a legitimate low post scoring threat – though he’ll likely still yield minutes to Dampier when it’s necessary to defend any of the big, physical old-school back-to-the-basket centres still out there. Keep in mind that Dampier’s contract figures to expire this season, so he is a definite candidate to be traded at some point.

Consistency, thy name is Dirk Nowitzki. The Mavs’ seven-footer has played in at least 76 games for 10 straight seasons, and has averaged at least 21.8 points and 8.4 rebounds in his last nine campaigns. Oh, by the way: Disco Dirk shoots about 48 per cent from the field and nearly 90 per cent from the line. He’ll still knock down about one trey ball per game, block close to one shot per outing and even throw in a few assists for good measure. He’s getting on in years (31), but Nowitzki will still fill up a box score like very few big men can. His off-court problems appear to be behind him, so look for more good things from him this season.

Terry is a very valuable player off the Mavs’ bench, but the recently turned 32-year-old shooting guard/sixth man posted the second-highest points-per-game of his career last season, and he’ll be hard-pressed to duplicate those numbers with Howard presumably moving to the two-guard spot. Terry doesn’t contribute much in the way of assists or rebounds anymore, and last year’s field goal and three-point percentages were his lowest in five seasons. He needs to be rostered in all leagues, but he probably won’t perform to the level of his current seventh-round average draft position.

Marion tore it up in the pinball machine that was the Phoenix offense from 2000-2007, but his numbers dipped sharply during his stints with the Heat and Raptors. While some might view the Mavs’ acquisition of Marion as a desperation play (a “Hail Marion,” perhaps?) by an aging team yearning for a title, we like the move for both Dallas’ championship hopes and Marion’s Fantasy stock.

A return to a freewheeling offense (with consummate table setter Kidd at the controls) could be the key to Marion’s re-emergence as a Fantasy force. Kidd knows Marion’s game well from their days together in Phoenix, and the presence of top-scoring guns Nowitzki and Howard should free up the Matrix to reprise the support role he parlayed into Fantasy fame whilst playing for the Suns.

Marion should again be a decent source of points, boards, steals and blocks, but perhaps the most telling sign of the former stud’s imminent return to glory could be the re-appearance of his three-point shot, which has plummeted from 3.6 attempts per game in ’07-08 to just 0.5 tries per outing during his 27 games with Toronto last year. If Marion feels comfortable enough to start pumping the treys again, look out. Fantasy owners willing to risk a late third or early fourth-round draft pick on Marion could realize second-round value for their trouble, making The Matrix quite an attractive sleeper option this year.

Not much to report here: The Mavs traded top pick B.J. Mullens to Oklahoma City for the Thunder’s first-round pick Rodrigue Beaubois, a point guard from France. Beaubois’ enormous wingspan gives him potential on the defensive end, but he’ll have to improve his offensive skills before he’ll be a factor in the Mavs’ rotation.

Keep an eye on how the Mavs work The Matrix into the rotation. Conventional wisdom has Howard moving to the two-guard spot, with Marion playing the three. That being said, Howard has started only 24 games at guard during his six NBA seasons, so this is far from a done deal. Howard underwent surgery on his left wrist and left ankle back in May, but he is expected to be ready for the start of the season.

An intriguing rumour floating around is that the Mavs might occasionally dare to slide Nowitzki into the post, with Marion at power forward, Howard at small forward, Terry at the two and, of course, J-Kidd at the point. Nowitzki has started 102 games at centre in his career, but none since the ’04-05 season. This obviously wouldn’t fly against a big, physical opponent, but might be a viable option against a run-and-gun style offense. Fantasy-wise, the notion of Nowitzki gaining eligibility at centre is certainly drool-worthy. It’s a long shot, but definitely something to watch for this preseason.

By Buck Davidson
This entry was posted on Sunday, September 27th, 2009 at 7:21 am and is filed under 2009-10 RotoRob NBA Draft Kit, BASKETBALL, Buck Davidson, Team report. You can follow any responses to this entry through the RSS 2.0 feed. You can skip to the end and leave a response. Pinging is currently not allowed.