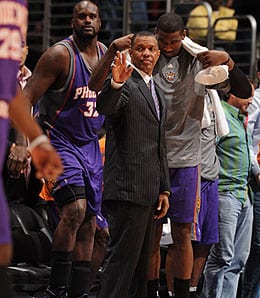 Can Alvin Gentry (middle) get the Suns back to the playoffs with an up-tempo offense?

We’ve got yet another team preview today as the unstoppable force that is the 2009-10 RotoRob NBA Draft Kit surges forward. While Michael Beasley tries to resurrect his career after rehab, Herija checks in on the Phoenix Suns, who could use a bit of rehab themselves after slipping into free-fall mode the past two seasons.

After three disappointing eliminations from the Western Conference playoffs, the Suns swung for the fences in 2007-08 when they acquired Shaquille O’Neal from the Heat in an effort to put them over the top in the west. Unfortunately, Phoenix was bounced in the first round that year, prompting the club to part ways with Mike D’Antoni and hire Terry Porter in an effort to employ a more balanced brand of basketball. The results were disastrous.

Despite posting a 46-36 mark, Phoenix failed to reach the playoffs for only the third time in the past 21 years, and Porter gave way to Alvin Gentry after just 51 games. This offseason, the club rededicated itself to running an up-tempo offense, which meant that O’Neal (and his massive salary) was no longer a fit (if he ever was to begin with). The Suns summarily dealt him to Cleveland for what amounted to a second-round pick and cash after they chose to buy out the two players (Ben Wallace and Sasha Pavlovic) they picked up in the trade.

Those moves did free up enough money for the team to sign Channing Frye, who should replace O’Neal in the pivot. Frye’s production has steadily declined since his rookie year, but at 6-foot-11, 245 pounds, he could excel in Phoenix’s fast-paced offense. The Suns also convinced veteran Grant Hill to spurn outside interest and re-sign with the team. Those two are expected to join long-time Suns Steve Nash and Amare Stoudemire in the starting lineup along with swingman Jason Richardson.

It’s hard to view this year’s Suns as a legitimate title contender, but recommitting to the running game that made Nash a two-time MVP combined with a healthy return from Stoudemire should at least be enough to put them back into the playoffs in 2009-10.

The starting five isn’t set in stone, but it’s close. Frye and Stoudemire might switch positions in the box score, but they should pretty much be interchangeable at power forward and centre. About the only possible curveball I could see is if the Suns choose to start Clark (6-foot-9, 225 pounds) at small forward to give them more size in the frontcourt while also allowing them to bring some veteran savvy off the bench with Hill. However, given Hill’s poor work coming off the pine last season and Clark’s inexperience, such a scenario seems unlikely.

On the bench, the Suns need to sort out their frontcourt depth with Amundson, Clark, Lopez and Jared Dudley all vying for playing time. Of that group, Dudley seems most likely to be the odd man out considering Lopez and Clark were first-round picks by the Suns and Amundson (6’9″, 238) brings more size to the table than Dudley (6’7″, 225).

It was pretty obvious to anyone that watched the Suns play last season that Stoudemire and O’Neal were not a match made in heaven on the court. The results: A sizable drop in production across the board for Stoudemire in an injury-shortened campaign. Now that the team is going back to their “seven seconds or less” philosophy, Stoudemire should produce closer to the 25.2 points, 9.1 rebounds and 2.1 blocks per game he averaged in 2008-09. On top of that, he’s a safe bet to shoot north of 55 per cent from the field and 80 per cent from the line, so consider him a first round talent.

Soon to be 37 years old, Hill’s primary contributions to the Suns this season should be leadership and helping to facilitate the offense. Unfortunately, that doesn’t translate into big numbers. In fact, Hill figures to be no better than the fourth option depending on how well Frye responds to his new surroundings, and the old man could easily finish sixth in scoring on the team behind the other four starters and Barbosa. Also, don’t forget that prior to last year’s 82-game miracle, Hill hadn’t played more than 70 games in a season since 1999-00.

You could make a case for Stoudemire since his value will be down this year, but the real sleeper in the desert is Frye. Yes, his playing time and production have dipped since his rookie season, but he should get plenty of burn with the Suns. He’s got a good midrange game and should see lots of open looks running the pick-and-roll with Nash. Don’t put something in the neighborhood of 14 points and seven boards a night out of his reach for this season.

Clark is an excellent athlete and a possible steal at the 14th pick. He has the versatility to play multiple positions and can get out and run, which makes him a potentially great fit for the Suns. His commitment and effort were question marks during his time at Louisville, but he has a similar skill set to the Lakers’ walking mismatch, Lamar Odom…though he’s not stupid enough to marry a Kardashian.

Stoudemire’s return to health is a big one, but clearly all eyes will be on Phoenix’s offense as a whole since a return to the D’Antoni offensive philosophy should create plenty of impact Fantasy performers in the desert.