Fantasy Notes: D-Backs Out of Venom 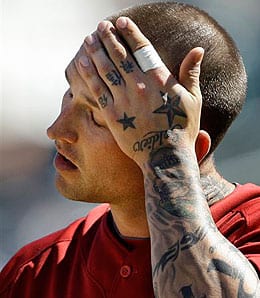 Ryan Roberts won a roster spot then won the 2B job in Arizona.

Despite playing well most of the summer, the Arizona Diamondbacks were never able to dig their way out of the hole they put themselves in over the first three months of the season – especially in June, when they crashed and burned, winning just nine of 26.

Unfortunately, what modest strides the D-Backs showed in July and August (29-26) have been replaced by a miserable September (6-15), as the team slithers to its first sub-.500 season since 2006.

After dropping two of three at home to both Colorado and San Francisco, Arizona gets its last chance at the Padres, who visit Chase Field for three games this weekend. With the Snakes heading into this series four games back of the Pads, even a sweep won’t pull them out of the cellar, but it will give them a decent shot at doing so next week, thus somewhat salvaging what has been a miserable season.

The rotation has been decent, at times brilliant, but the mess that has been the bullpen has ruined most of those solid efforts from the D-Back starters. And a middling attack has not been strong enough to overcome that ugliness.

Among the more pleasant surprises in ‘Zona this summer has been the emergence of Ryan Roberts. Finally given an extended look in the majors, Roberts has done a solid job in his utility role. We recommended him back in early August, and those smart enough to take our advice definitely reaped some rewards as he recorded an OPS of over 1000 last month, scoring 16 runs, drawing 15 walks and even pounding four dingers. September has been a different story (644 OPS), however, Roberts is showing signs of turning things around. He was 2-for-3 with a walk Wednesday, running his hit streak to five games, including three multi-hit efforts. If you need middle infield help in an NL-only league, Roberts might be worth a second look. Anyway you look at it, it’s been a career year for the minor league vet, who, having just turned 29 this past weekend, doesn’t really have any upside. Still, he’s shown gap power, good on-base skills and an ability to hit for a decent BA, so he may yet carve out a brief career as a bench player. Hell, there’s even some talk that he could be the starter next year, but I find that hard to fathom. A more likely scenario would be Arizona trying to parlay Roberts’ breakout season by dealing him for some pitching help this winter.

Another minor league veteran who saw more action this season than ever before is infielder Augie Ojeda. We recommended him as a short-term pickup way back in April when Stephen Drew was hurting, and he did enjoy a very fine first month of the season. However, Ojeda scuffled badly over the next three months, finally snapping out of it with a big August (.311 BA, 860 OPS). Like Roberts, Ojeda has gone into the tank in September, and until a 2-for-4 showing Wednesday, he had been mired in a 2-for-18 skid that had helped bring him OPS down to a marginal 599 this month. Ojeda has really only provided some value in very deep NL-only leagues, and even then, probably only because of his positional flexibility. At the age of 34, Ojeda doesn’t have much of a future in baseball, but he’s definitely done enough this year to get himself another back-up infield gig somewhere in 2010.

Perhaps the best thing to happen to Arizona this season, at least on the offensive side, is the emergence of youngster Justin Upton, who has truly arrived as a prime-time player. Okay, he hasn’t been great this month (just four runs, 10 RBI, 19 Ks, .260 BA, 735 OPS and an ugly 0-for-4, Golden Sombrero performance Wednesday), but he was absolutely sick in August (1212 OPS), despite missing a couple of weeks with an oblique injury. J-Up, who just turned 22 last month, could be the second NL outfielder off the boards come draft day 2010 – that’s how much progress he’s made this year. And when you think about his upside, it boggles the mind. He’s already shown such tremendous growth as both a power hitter and a basestealer that it’s clear the sky is the limit here, folks. Be prepared to pay quite handsomely for this kid next spring.

Speaking of breakout seasons, remember what Drew did last season? So, what the hell happened to him this year? He was 1-for-4 with a run and an RBI Wednesday, giving him hits in five straight and 13 of 14 games, but he hasn’t really been doing much damage. In fact, despite this run, Drew is batting just .244 with a 656 OPS in September, managing only one long ball. He’s really struggled badly since having a solid July (971 OPS). It’s been a big step backward for Drew this year, and he doesn’t steal enough bases to compensate for his relative lack of power and low average. We’ll cut him some slack and assume that his early-season hamstring problems had a lasting effect. Drew is still just 26, so I wouldn’t bet against him bouncing back next year, but 2009 has been a big disappointment for a player most expected to take it to the next level this season.

Of course, the biggest Fantasy darling on the D-Backs this season has been third baseman Mark Reynolds. He’s struck out another five times in the past two games, giving him 208 whiffs and extending a record that he’s now broken in consecutive seasons, but the common perception is who cares when he’s pounding the dingers, driving in runs, swiping bases and hitting for a decent average? Reynolds is yet another Snake who came up huge in August (11 homers, 21 RBI, four steals, 1030 OPS) only to crash and burn this month (10 RBI with a BA under .200 and an OPS of just 644), yet regardless, he’s had a superb second half. Reynolds has been durable this season, has taken strides as a hitter and run producer, his power has been off the charts and he’s even swiping a boatload of bases. Yes, he could have more upside still, considering he just turned 26 last month, but the fact that his BABIP is on the high side suggests that there could be trouble next year. I’d be careful with Reynolds in 2010, because he has potential dud written all over him.

By RotoRob
This entry was posted on Thursday, September 24th, 2009 at 4:37 pm and is filed under BASEBALL, Fantasy Notes, RotoRob. You can follow any responses to this entry through the RSS 2.0 feed. You can leave a response, or trackback from your own site.