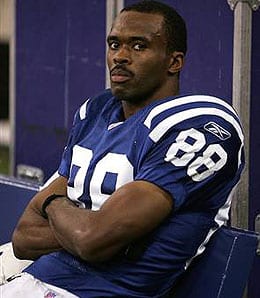 Derek was amazed the first time he saw Marvin Harrison.

Ten years ago, I was a naïve 20-year-old college student on the road to…well, at the time I had little idea. However, at that time I got a first hand introduction to two of the most destructive forces in football…Peyton Manning and the Mount Union College Purple Raiders.

The latter is obviously the lesser known of the two but comprises the most technically sound group of football players not playing Division I football. Their fearless leader and head coach, Larry Kehres, has led his Alliance, Ohio-based squad to 10 national titles, 17 consecutive Ohio Athletic Conference titles and the longest winning streak in the history of college football — 55 games.

My alma mater, Rowan University in Glassboro, New Jersey, fell to the Purple Raiders in the Amos Alonzo Stagg Bowl on three occasions (’93, 96, ’98). As luck would have it, my first year as a colour analyst for Rowan football on the campus’ college radio station, would include a trip to Ohio as Rowan faced its longtime nemesis in the national semifinal with a berth to the national championship game on the line.

I had seen them on television once before. They were a Division III combo of the ’80s 49ers and the ’70s Steelers. Scoring on their defense was out of the question while holding their offense under 24 points was a pipe dream.

Incredibly, the Profs (yeah, I know…stop laughing) defeated Kehres’ crew in overtime 24-17 to advance to the Stagg Bowl in Salem, Virginia. Rowan celebrated and celebrated and celebrated. Why not? It had just beaten a team that was trying to four-peat on its home field. So carried away with beating the mighty Mount, I ripped up blades of grass from the field and put them in my pocket. Finally, the Profs vanquished the demon and would assuredly win the national title a week later; while Mount Union would fall into the depths of mediocrity.

As it turns out, that never happened. Perhaps, so overwhelmed by defeating Mount Union, a little known team from Tacoma, Washington named Pacific Lutheran, who played tag during pre-game warm-ups and enjoyed watching sunsets together as a team (true story), crushed Rowan 42-13 to win the national championship. Colour me devastated.

How did Mount Union respond after a devastating loss to Rowan? It won the next three national titles. Whoops.

A month prior to Rowan’s demise in Virginia, I stood on the worn, beaten up and rather unsafe surface of Veterans Stadium and helped set up some promotional items as a part of my internship with the Philadelphia Eagles’ flagship radio station, 94.1 WYSP-FM.

Looking around, I noticed a rather large youngster firing balls downfield to another guy who could seemingly catch these passes with his eyes closed. I inched closer and now standing just a few feet away, my eyes confirmed what I originally thought; I was watching Peyton Manning and Marvin Harrison practice their craft until they perfected it — something they would go on to do in stadiums throughout the country. Manning’s Colts buried the Birds that day at the Vet, 44-17.

Flashing forward six years, for the first time since its memorable victory in 1999, Rowan paid a visit to Mount Union. The Profs, whose starting quarterback who was out with a broken wrist, lost to Mount Union 19-7. While handling radio play by play duties, I noticed a quick Mount Union receiver who was extremely difficult to cover. His name was Pierre Garcon.

When Garcon took a Manning pass 48 yards to the house for a game-winning score on Monday night against Miami, I could not help but realize that two entities which tormented my professional and college teams now were married together on the field.

As a Rowan University football fan, Eagle fan and follower of all things Tom Brady and Bill Belichick related, it was an unsettling moment.

1. Don’t sleep on small college football: You don’t need to be from USC, Miami or Notre Dame to have a good career in the pros. Not only did Garcon stun the Dolphins, but Buffalo’s Fred Jackson is also a D-III player by way of Coe College in Iowa. Meanwhile, Joe Flacco of the University of Delaware led Baltimore to the AFC title game last year and a 2-0 start so far. His head coach at Delaware? K.C. Keeler, formally of Rowan University. Yes, another gratuitous mention of Rowan University.

2. Something is terribly wrong with the Tennessee pass defense: Through two games, the Titan pass defense allowed 321 and 357 yards passing. While they have been solid against the run, their pass defense stinks thus far. Take note if you’re on the fence with a quarterback who is facing them.

3. Don’t get Marcus Fitzgerald on your bad side: Young Marcus is the brother of the great Larry Fitzgerald. Unhappy that his brother wasn’t exactly getting quality looks from Kurt Warner, Marcus did what any calm and rational sibling would do…he took his complaints to Twitter and unleashed the following tirade:

Marcusfitz1 Just got off the phone with my brother.he’s happy about the win. But PISSED he didnt get the ball thrown 2 him much!

Marcusfitz1 @TBaby81 kurt warner plays like a damn 80 year old! my brother just texted me during halftime pissed off

Marcus maintained he was kidding afterwards. Somehow, I don’t quite buy that.

4. When your team gives up 183 yards receiving to a tight end, allows said opponent to hold the ball for under 15 minutes and yet still loses the game, something is terribly wrong: The bloom is off the rose for the Miami Dolphins. Despite dominating time of possession and the tempo, they still managed to lose. Don’t expect them to be a playoff team in 2009.

5. Tony Romo’s Week One performance versus Tampa Bay was clearly a mirage: Watching Playbook on the NFL Network is not a fun view if you’re a Romo fan. He struggled to recognize coverages and did not see the field well. The bizarre Jason Witten kick that led to a pick aside, he looked awful.

6. The San Francisco 49ers are the team to beat in the NFC West: With Arizona playing a slightly more challenging schedule this season, the ‘Niners could make some hay in the NFC West. They already beat Arizona in the desert and this week square off against the Vikings and Minnesota QB No. 4, who the 49ers beat a season ago when he was a Jet.

7. It’s okay to admit that the Cincinnati Bengals have a good defense, really…it’s cool: Antwan Odom leads the league in sacks with seven, while the Bengals are tops in that same category as a team. They should be 2-0 except for that disaster play versus Denver in Week One. Defense is back in Cincinnati. I can’t believe I just typed that.

8. Don’t jump yet, Tom Brady owners: Carson Palmer, Donovan McNabb and Daunte Culpepper all suffered serious knee injuries. While McNabb is the only one who posted career numbers following his ACL injury, all three struggled to shake off the rust. Why people were expecting the 50-touchdown Brady from the jump is beyond me. It’s going to take some time, America. Let’s not throw dirt on him yet.

9. Every year will be the year of the quarterback: Through the first two weeks of the NFL season, the composite quarterback rating is 83.9, which would be a new standard for quarterback play. Considering defenders are nearly penalized for taking the field at this point, that trend is likely to continue.

10. Darrelle Revis = shutdown corner: Revis has faced Andre Johnson and Randy Moss in the first two weeks. During those two games, he allowed eight catches for 59 yards with a long reception of seven yards. Don’t go his way with a throw, period.

2. Adrian Peterson (1) – The biggest concern is his workload and thankfully, Brad Childress did not run him into the ground versus the hapless Lions.

3. Chris Johnson (NR) – He put forth a performance for all seasons against the Texans. Somewhere, Gus Johnson is still screaming.

5. Andre Johnson (10) – A monster week in Tennessee puts him at the head of the class for receivers.

6. Peyton Manning (9) – Anyone actually believe that Indy was losing that game on Monday night?

7. Reggie Wayne (7) – He will likely not get the credit because of other guys at the position, but he is as steady as they come.

8. Larry Fitzgerald (8) – His brother needs to settle down.

9. DeAngelo Williams (6) – He looked better versus Atlanta, but his ’08 season will be hard to duplicate.

10. Maurice Jones-Drew (5) – Another year, another rough start for the Jags.

One of America’s greatest musical products, Bruce Springsteen, turned 60 earlier this week. Let’s jump in our time machine and visit the quality year of 1975. Bruce and the E Street Band performed in London and rocked the house with a version of Tenth Avenue Freeze Out.

By Derek Jones
This entry was posted on Friday, September 25th, 2009 at 3:13 pm and is filed under Derek Jones, FOOTBALL, Two Minute Warning. You can follow any responses to this entry through the RSS 2.0 feed. You can skip to the end and leave a response. Pinging is currently not allowed.